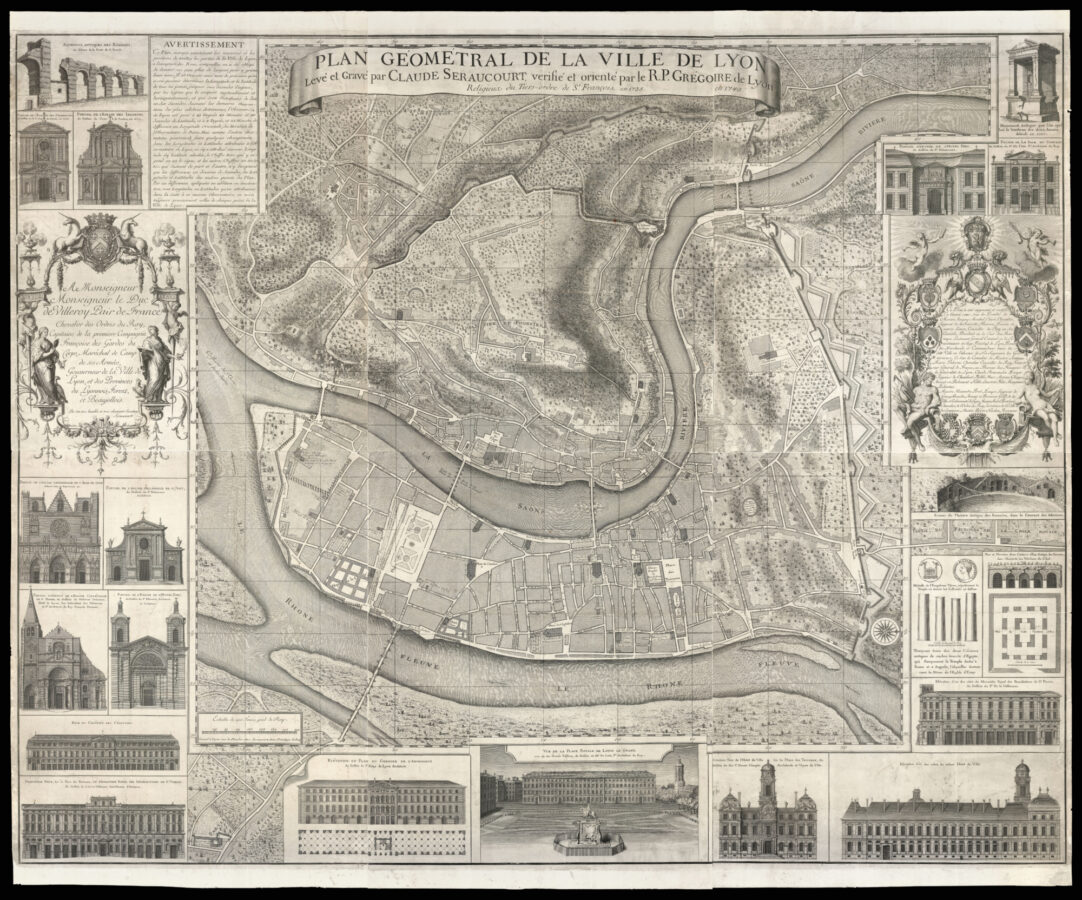 A monumental plan of Lyon, the first edition from 1735 being the first of its kind of the city.

Claude Séraucourt (1677–1756) was born in l’Arbresle, where he was apprenticed as an engraver to Jean François Cars, before moving to Lyon to pursue an independent career. The ancient city was particularly important during the seventeenth and eighteenth centuries because of the four major trade fairs inaugurated within its walls under Louis XI. The fertile lands surrounding the city meant that it offered some of France’s finest produce and wines, while weaving privileges given to Lyon by Francis I also made it a centre for the silk industry. Furthermore, its proximal location to both Italy and Switzerland meant that Lyon became one of the crossroads of Europe as communications and travel became easier and more common.

The developments and growth that Lyon underwent during the eighteenth century called for better urban planning and a general expansion of the city’s facilities and buildings. This task was undertaken by an array of skilled architects, including Antoine-Michel Perrache and Jacques-Germain Soufflot, transforming the topography of the city. As a result, earlier maps and plans of Lyon, which were in themselves rather rudimentary, needed updating; Séraucourt took up the challenge of producing a new and accurate aerial plan. He worked alongside R.P. Grégoire, who oriented and verified the draughts, and about whom little is known other than that he was a member of the order of St. François.

In 1735, Séraucourt published his plan, the first of its kind. Oriented to the east, it is centred on the convergence of the two rivers that run through Lyon: the Rhone and the Saone. These rivers come together in the centre of the city to form a peninsula, the location of the modern day 1st and 2nd Arrondissements. The plan accurately represents vast swathes of the city, including large portions of today’s 4th and 5th Arrondissements, with its churches, walls, streets and public spaces all labelled. One inaccuracy, however, is that Séraucourt was forced to enlarge the width of the streets in order to accommodate their names.

Surrounding the plan are engravings of notable buildings, including the Hotel de Ville, local Roman ruins and the square of Louis le Grand. A panel in the upper left corner explains the orientation of the plan, and there are a further two panels of text, each set within elaborate rococo cartouches. One houses the dedication to François de Neufville, Duke of Villeroy, and the other, not present on the first edition, describes the additions and amendments made to the second edition of the plan by Jacques Annibal Claret in 1740. The plan went through at least three different editions within eleven years of its initial publication, with a 1746 edition being published in Paris by surveyor and cartographer John Rocque (1709–1762).

Rare. We have been able to trace only three institutional examples, held in the British Library, Bibliothèque Nationale de France and BM Lyon.