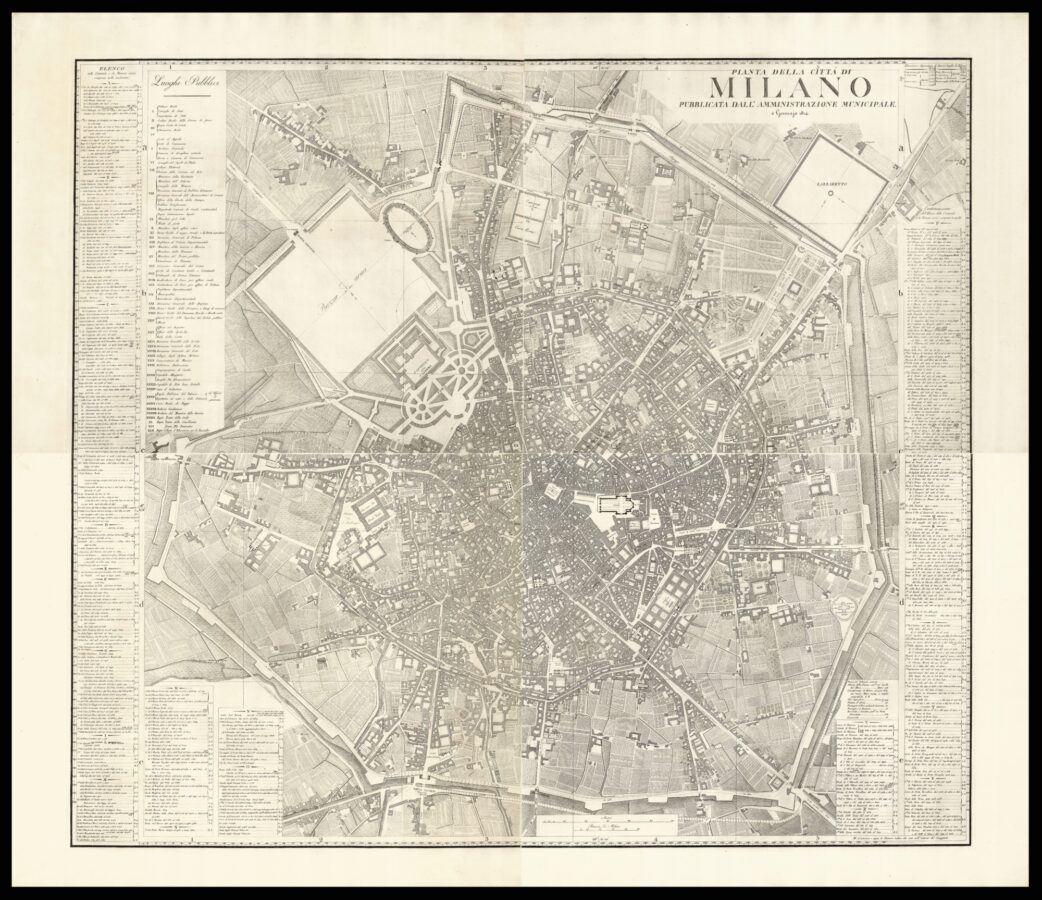 One of the earliest ​‘modern’ maps of Milan, published at the very end of Napoleonic rule in northern Italy.

From 1796 to 1814, the modern regions of Lombardy, Veneto, Emilia-Romagna, Friuli Venezia Giulia, Trentino, South Tyrol and Marche were collectively ruled by France under Napoleon Bonaparte’s Kingdom of Italy. Milan was the state capital, and the Palazzo Brera its main cultural centre, housing the gallery of the national Academy, a museum of antiquities, a botanical garden, an extensive library and an observatory. Napoleon was intent on making it a learned establishment of global importance; in fact, one of his earliest actions after setting up his new government in Milan was to meet with Barnaba Oriani, the unofficial head of the Brera Observatory.

Perhaps to reaffirm its control over the Kingdom, the Napoleonic regime commissioned new maps of its territories, declaring the existing material insufficient and demanding that the newly unified provinces be shown collectively. The Brera Observatory was supplied with new instruments and charged with surveying the Duchy of Milan. The initial attempt in 1804 was disastrous, with the majority of the surveyors falling ill, one drowning in a river and the leader dying from excessive labour. Yet in 1807, the astronomers finally produced a plan of the city, which is widely considered the first modern map of Milan. It is entitled ​‘Pianta di Milano. Capitale del Regno d’Italia’ (‘Plan of Milan. Capital of the Kingdom of Italy’).

The only surviving copy of the map is held in the Milan State Archives, having been rediscovered and restored in 2007. The present map, however, is almost identical in cartography, and was also produced by the astronomers of the Brera Observatory. It is dated to 2 January 1814 and bears the title ​‘Pianta della città di Milano’ (Plan of the city of Milan). There are a few minor distinctions in the topography of the 1807 and 1814 maps which reflect the political developments in Milan. The Villa Bonaparte and the Contrada Bonaparte notably lose their references to the French leader, the former becoming ​“Villa Reale” and the latter the ​“Strada Risara”. The defeats faced by Napoleon’s army in 1813 pointed towards his inevitable fall from European dominance, and indeed he would abdicate his rule in April of the following year, officially releasing his Italian territories on 30th May 1814. The changes in this map, published only four months earlier, mirror the decline of French influence over Italy, and in particular, Milan.

Nonetheless, the plan is consistent in depicting the same roads, buildings and squares as shown on the earlier plan. It is incredibly detailed, with house numbers and names listed, and the interior of certain buildings and gardens pictorially illustrated. An index on the left gives the names of the streets, alleyways, buildings and piazzas presented on the map, while to the right there is text explaining some important information about the topography of the city, including its height above sea level and the circumference of its walls. Of particular note is the Sforza Castle in the upper left corner, which had been remodelled under the Napoleonic regime with the addition of the piazza castello, and is shown surrounded by the tree-lined Forum and the immense Cavalry Barracks.