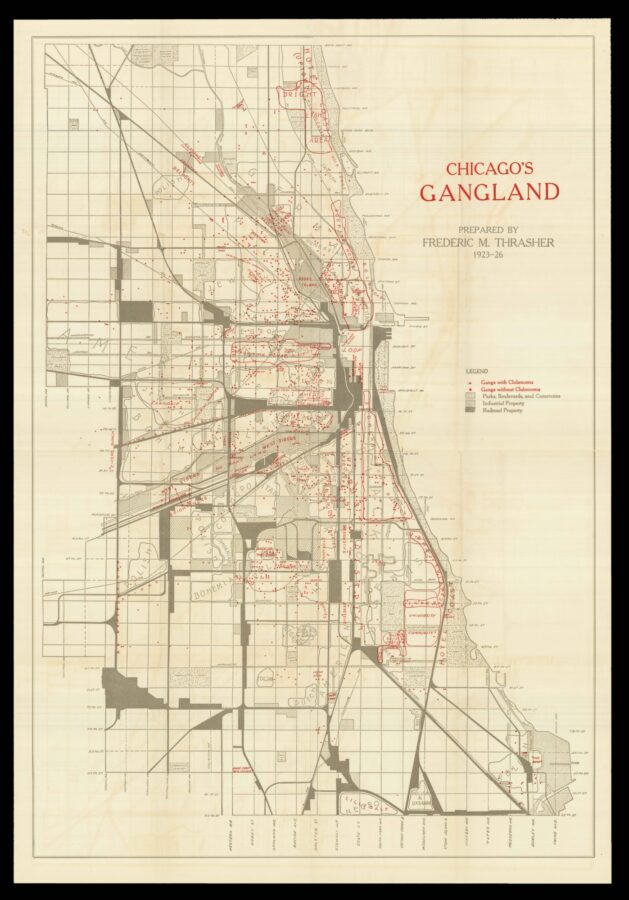 Frederic Thrasher cemented his position as one of the leading members of the Chicago School of Sociology with his highly influential study of the city’s gang culture. ​‘The Gang: a study of 1313 gangs in Chicago’ was first published in 1927, and embodies the increasing academic interest in social and cultural failings also represented by contemporary studies such as Louis Wirth’s ​‘The Ghetto’ (1928), Nels Anderson’s ​‘The Hobo’ (1926), and Ruth Cavan’s ​‘Suicide’ (1927).

The early twentieth century saw rapid urban expansion across the United States; between the end of the First World War and the Great Depression, Chicago’s industrial output grew to account for 15% of the nation’s total production, creating 328,000 new jobs. Naturally, this sudden growth had a number of higher order effects, such as the influx of immigrants, the breakdown of traditional roles and responsibilities, and new modes of association and living, many of which Thrasher examines in ​‘The Gang’, and to several of which he attributes the emergence of over one thousand gangs.

Thrasher was fundamentally a sociologist, rather than a psychologist, and his study of gangs and gang culture therefore takes a greater interest in the environment and circumstances that engender them, than in the personal attitudes or deficiencies of the individual gang members. For Thrasher, gangs and ​“gang-boys” were the product of liminal areas in which formal institutions such as the school, the church, the community and other official authorities had either failed to establish a presence, or failed to be sufficiently interesting, appealing or engaging to these young men. Gangs ​“flower where other institutions are lacking or fail to function efficiently. It is a typical symptom of the disorderly life of the frontier” (p20).

This frontier imagery characterises Thrasher’s discussion of Chicago’s ​“gangland”, which is depicted as an amalgam of disparate sub-communities transmuted into a set of hostile factions as their younger members formed gangs. These groups, sometimes indolent, generally destructive and often violent, were not only born out of geographical proximity, but eventually came to define the area over which they dominated; in Thrasher’s description of Chicago, the expected topographical terms are replaced with titles such as ​“The North Side Jungles”, ​“The West Side Wilderness”, and ​“The South Side Badlands”.

Alongside Thrasher’s excited and fast-paced prose, numerous illustrations provide the reader with a more atmospheric and immersive glimpse into the ​“ganglands” of Chicago in the 1920s. In fact, the work included a folding map of the city on which Thrasher had plotted the location of its 1313 gangs, distinguishing between those with and without a clubroom. The Chicago School of Sociology was interested in the mapping of geographic spaces and how it could reflect or unveil a link between topography and behaviour. Indeed, Thasher takes care to identify Chicago’s ​“parks, boulevards and cemeteries”, its ​‘Industrial property” and ​“Railroad property” in a key to the right of the image. Such areas are referred to throughout the book as ​“the playgrounds of the gang”:

​“The playgrounds of the gang are areas where gang boys find unusual opportunities for amusement and adventure, not offered in their home territory. The most important of these are certain streets, the canals and the river, the lake front, the Loop, the newspaper alleys, the amusement parks, the forest preserves, and the railroad tracks” (p132).

Red dots indicating gang territory are set against a grey urban plan on which are shown the names of major streets and buildings, relevant information such as ​“bright light area[s]”, and most prominently of all, the racial demographic of each zone. Thrasher identifies the boundaries of ​“German”, ​“Italian”, ​“Dutch”, ​“Hungarian”, ​“Bohemian”, ​“Black”, ​“Polish”, ​“Jewish”, ​“Mexican” and ​“Cosmopolitan” territories, echoing his analysis of Chicago as ​“a mosaic of foreign colonies with conflicting social heritages” (p4). Names of specific gangs also accompany some of the dots, such as the ​“Cicero Bunch” and the ​“West Siders”, and further annotations show where there was ​“gang conflict”, ​“gambling” and a ​“dope gang”. In addition to the demographic borders, Thrashers draws in the ​“frontiers” between gangs of different ethnicites, such as the ​“Polish-Jewish Frontier” and the ​“Irish & Swedish Frontiers”.

Thrasher’s map provides an effective visual representation of his perceptive analysis of Chicago’s gang culture. ​‘The Gang’ were soon considered a seminal work in the study of gangs and urban society, and became one of the leading projects of the Chicago School of Sociology.

Rare. We have been able to locate just nine examples of Thrasher’s original map, all held in institutions located in the United States. This may be due to the fact that the 1927 edition of ​‘The Gang’ was overtaken in 1963 by a new and highly edited version with an extensive introduction and notes by James Short.