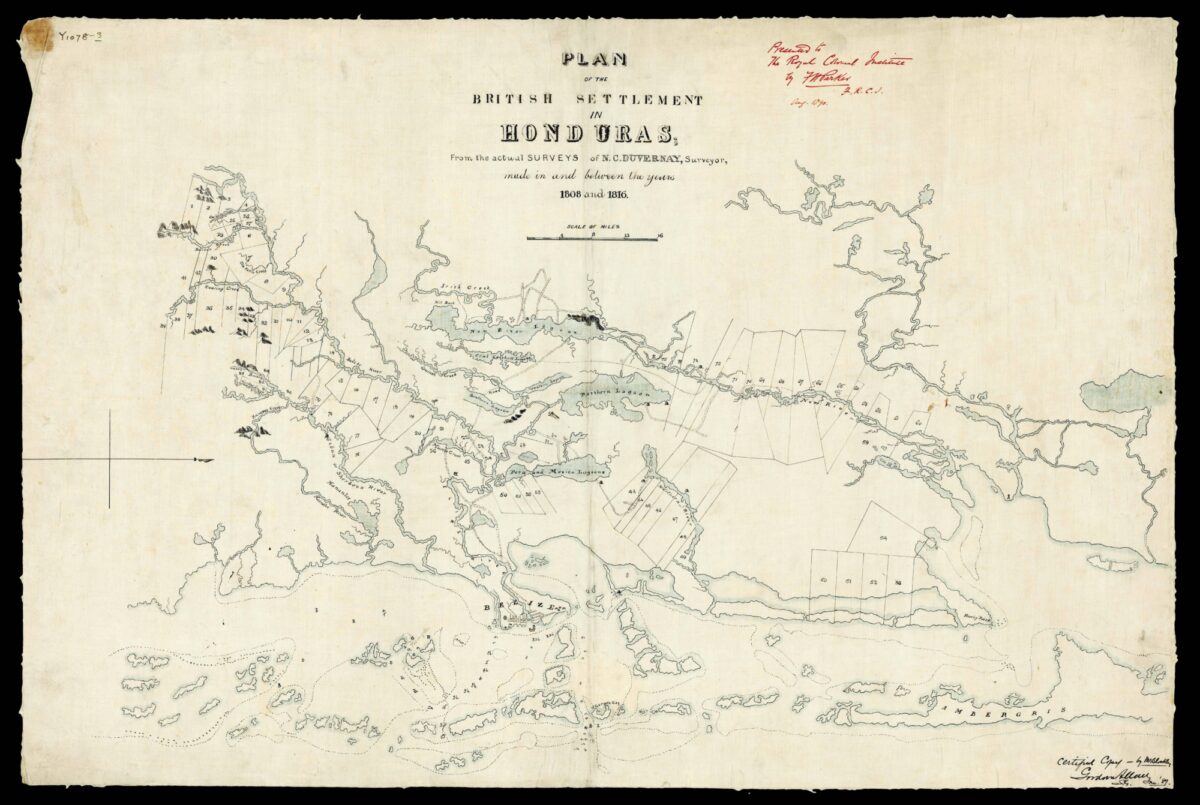 A manuscript map of Belize

Plan of the British Settlement in Honduras From the Actual Surveys of N.C. Duvernay, Surveyor, Made in and between the years 1808 and 1816.

This detailed manuscript map of Belize (British Honduras) outlines the Belize River and the city of Belize, the adjacent Ambergris Caye Island and Rocky Point on the mainland; includes main rivers (New River, Northern, Sibun or Sherboon, Mannatee), numerous creeks (Barton, Roaring, Kettle, Muscle, Spanish, Irish) and lagoons (New River, Crab Catchers, Western, Northern, Southern, Peru and Mexico). The map outlines the roads, caves in the southwestern part of the region, indicates sea depths in feet, and gives a thorough plan of over 50 numbered pieces of land throughout the whole territory of Belize. This important map from the period of the early British settlements and administration in Belize is a certified copy from the original survey made in the beginning of the 19th century. The copy was executed under auspices of Frederick Hardyman Parker, a British colonial administrator who served in the late 19th century as Registrar of the Supreme Court, Provost Marshal and Keeper of Records in British Honduras (See: British Honduras Legal Manuscripts/​Royal Commonwealth Society Collection/​Cambridge University Library). ​“In 1889 Parker was appointed to act as Attorney-General of British Honduras. He ​“was the only son of Mr. William Alexander Parker, Chief Justice of British Honduras. He was educated at the University of Edinburgh” (The Solicitors Journal and Reporter. Vol. Xxxiii, 26. April 27, 1889. P. 416). Parker was a fellow of the Royal Geographical Society and a member of the Royal Colonial Institute (since 1882). In 1906 he was mentioned as a District Judge in Nicosia, Cyprus (Proceedings of the Royal Colonial Institute. Vol. Xxxvii. London, 1906. P. 454). Most likely the map was copied to be presented to the Library of the Royal Colonial Institute (now the Royal Commonwealth Society), and according to the presentation inscription, this was done in August 1890.