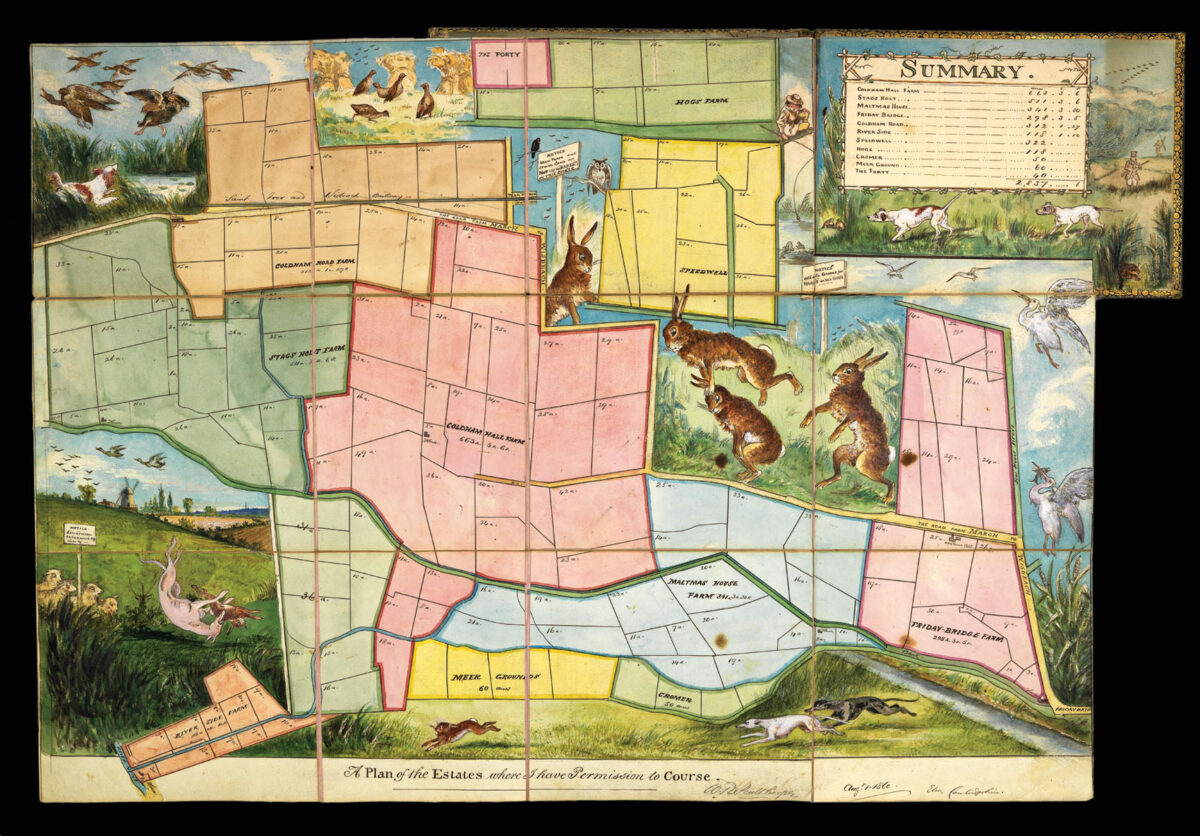 My Sporting Map A Plan of the Estates where I have Permission to Course.

A very unusual and charmingly decorated map made by one Walter Sculthorpe from Cambridgeshire, recording the estates where he had permission to go hare coursing. Hare coursing was a particularly popular sport in the Fens at the time, where two hounds competed to pursue a hare, turn and sometimes kill it. The map covers eleven estates, each coloured and subdivided, with a table of their acreages at the upper right. Sculthorpe was clearly an avid hunter, and his sketches cover every aspect of the sport: greyhounds chasing hares at the bottom, a spaniel hunting ducks at the upper left, and a group of hares playing leapfrog in the centre.

Hare coursing was, however, his personal passion, as shown by the newsprint pasted to the verso. He owned two hounds called Deerfoot and Blucher, the latter named after the Prussian general who fought with the Duke of Wellington at Waterloo. Their photographs are pasted to the verso, along with several clippings recording their victories. Blucher in particular appears to have had a successful career, winning a cup at the Elm Meeting in 1863, although he was injured the following February. There is also a report from Ely Petty Sessions recording a trespassing case for hare coursing in which he was concerned, and a large photograph of what is presumably his house and family. The same photograph appears in a reduced version on the title page, as does a clipping recording the sale of some land. The title page and map are bound with a copy of the 1860 Game Licences Act, which made it illegal to hunt, kill, buy or sell game without a licence.

Sculthorpe is possibly Walter Robertson Sculthorpe, a clerk who rose to be president of the Post Office, and a talented watercolour sketch artist. A scrapbook made by him for Robert Cummings is held in the Brigham Young Library.