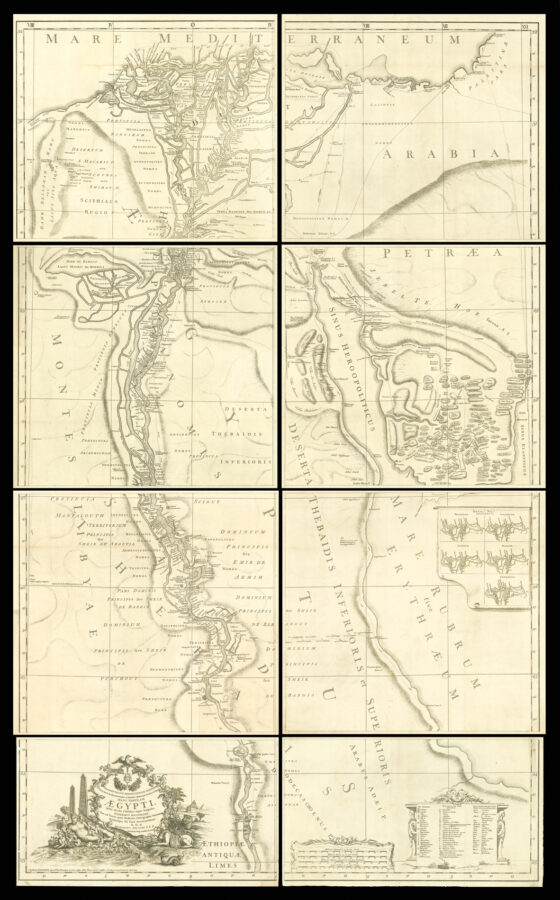 A journey to Egypt

Important and influential eight sheet wall map of Egypt from the original observations of Richard Pococke, but also incorporating other travellers’ accounts and details from antiquity.

Richard Pococke (1704–1765) was an English churchman, traveller, writer and mapmaker who spent three years travelling through the eastern Mediterranean, visiting Greece, Cyprus, the Holy Land and Egypt on his tour from 1737 to 1740. Perhaps his interest in the region was stimulated by his relatives; Thomas Milles, an uncle, was a Professor of Greek, while Edward Pococke, the English Orientalist and biblical scholar, was a distant relative.

On his return he wrote a two-volume account of his experiences, ​‘A Description of the East, and some other countries’ (London, 1743–1745), with the first volume devoted entirely to Egypt. In his advertisements he also referred to the map, which was finally announced in the Daily Advertiser (issue 3825) for 22nd April 1743, “… Also a Map of Egypt, and of Part of Arabia Petræa, on eight Sheets of large Paper, is this Day publish’d by the same Author. Sold by Philip Overton, at the Golden Buck, opposite St. Dunstan’s Church, Fleet-Street.”

The book had a large print-run, and was advertised for many years after, generally with reference to the map of Egypt; the owners of the unsold copies advertised both in the London Evening Post (issue 4687) for 19th — 22nd November 1757, for the first time found, with a price, ​“Where also may be had … 2. — his large Map over Egypt, and the Course of the Nile, on eight Sheets. In Boards, and Colour’d, Pr. 12s.“

The map inspired several derivatives, published both in England and on the Continent, and served as the best available map of Egypt (although inevitably the depiction is largely limited to the Nile valley) for the rest of the eighteenth century, superseded by the military surveys conducted during Napoleon’s invasion of Egypt.

Although found in several library collections, the map rarely appears in the trade.