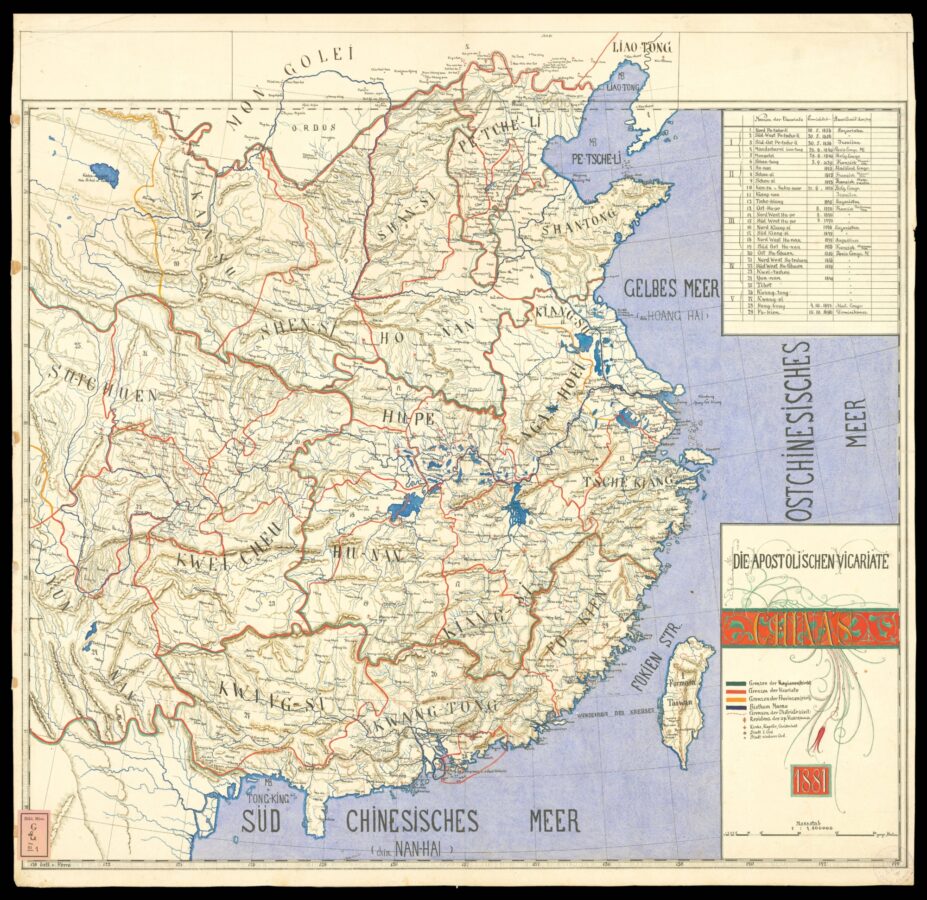 A German missionary map of China

A German map of China, concentrating on the ecclesiastical division of the country. China is divided into apostolic vicariates, regions, and civil provinces and districts. Apostolic vicariates are established by the Roman Catholic church in missionary regions which have not yet been divided into dioceses. Vicariates are outlined in red; regions in green, and provinces and districts in yellow and red dashes respectively. The location of the priest in each vicariate is indicated by a red two-barred cross. The diocese of Macao is outlined in navy blue. Macao is a diocese rather than a vicariate because it had been held by the Portuguese since the sixteenth century, and Pope Gregory XIII established a bishop there in 1576, originally as a suffragan diocese of the Archdiocese of Goa. A table to the right lists the vicariates, the date of their foundation, and the order that founded them.

At the time the map was drawn, Germany did not hold any concessions in China (although they would by 1898), but the Treaty of Tientsin in 1861 had opened up the country to European trade. During the second half of the nineteenth century, under the leadership of Otto von Bismarck, Germany was keen only to challenge Britain’s position in trade with China, with relatively little of the imperial ambition which defined the relations between China and most other European countries. By 1896, the volume of trade between China and Germany was second only to the trade between China and Britain.

This map may have been made by a German missionary to China — a substantial minority of the German population was Roman Catholic. A few decades before this map was made, Catholicism in China was in danger. Laws enacted by a succession of emperors sentenced missionaries to death for spreading Christianity, authorised the sale of converts into slavery, and banned Christian texts. The restrictions on the church were lifted as part of the terms of the Treaty of Tientsin, and missionaries were allowed to return, perhaps allowing this map to be made.