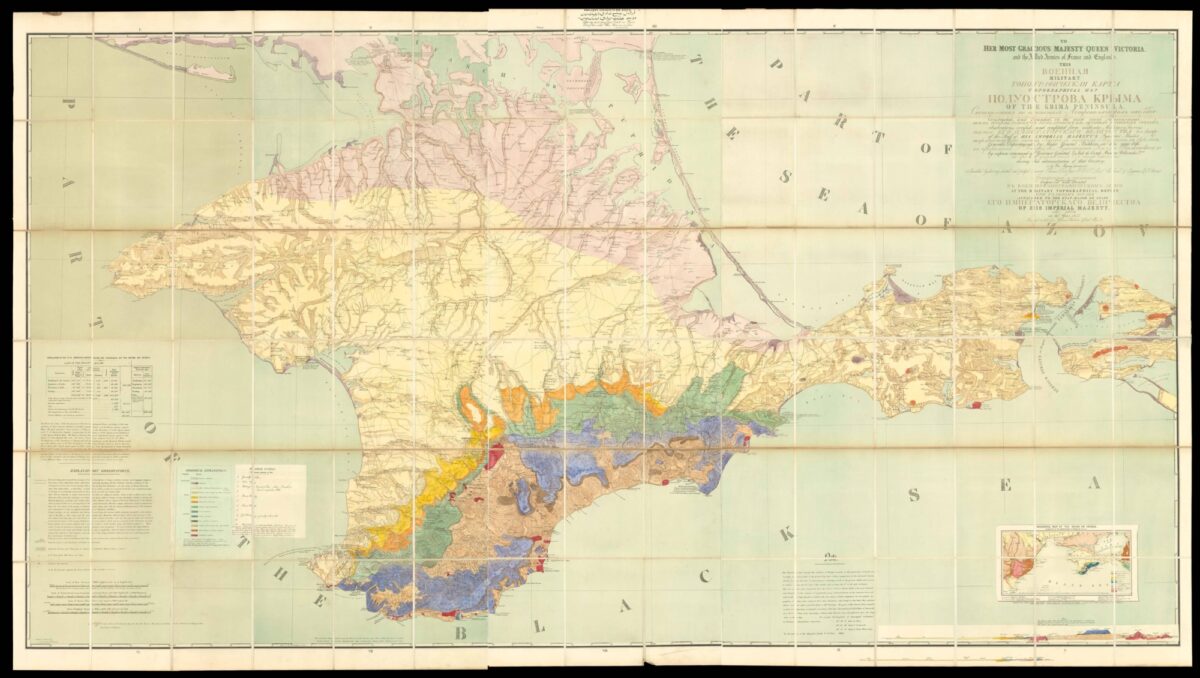 To her Most Gracious Majesty Queen Victoria, and the Allied Armies of France and England. This military topographical map of the Krima Peninsula

constructed, and founded, on the most recent astronomical observations, verified, and completed from authentic military surveys of the staff of his Imperial Majesty’s Quarter Master General’s Department, by Major General Mukhin in the year 1816; by express command of Governor General & Aid de Camp Prince Volkonski 2nd during his administration of that country. Is by her Majesty’s permission inscribed by her very devoted and faithful servant Thomas Best Jervis F.R.S. Major of the Corps of Engineers E. J. Service. The original map was engraved and printed at the Military Topographical Depôt. Attached to the État-Major or Staff of his Imperial Majesty in the year 1817 …

A large map of the Crimea Peninsula issued in the first year of the the Crimean War. Based on the earlier survey by Major General Semyon Mukhin, it was published by Thomas Best Jervis, a major of the Corps of Engineers and member of the Geological and Geographical Societies, who not only translated it but made ​‘useful and important additions’. There were several subsequent editions. In 1857 Jervis was made director of the new Topographical and Statistical Department, the creation of which he had urged for many years. He died soon after ​‘but he left a clear scheme for the duties which he conceived should be performed by the Department, and he had executed a number of maps pertaining to the Crimean War and the Near East’ (Watson, History of the Corps of Royal Engineers III p. 178).
Four leaves of letterpress text are pasted onto the back of the map, probably as issued, giving useful information relevant to the peninsula at the beginning of the Crimean War. They include ​‘A general account of the extent of the Russian Empire, its population, distribution, and classification by religious denominations. From the latest official documents, 1853, by Professor Struve, General Schubert, Mr Reden, and Dr Koeppen’, ​‘Organization of the military and naval forces of Russia, collected and arranged from the best official data’, ​‘Remarks on the proper pronunciation of foreign, and Asiatic words in particular’, and ​‘Miscellaneous useful information connected with the present seat of war, and the powers and states engaged therein’.