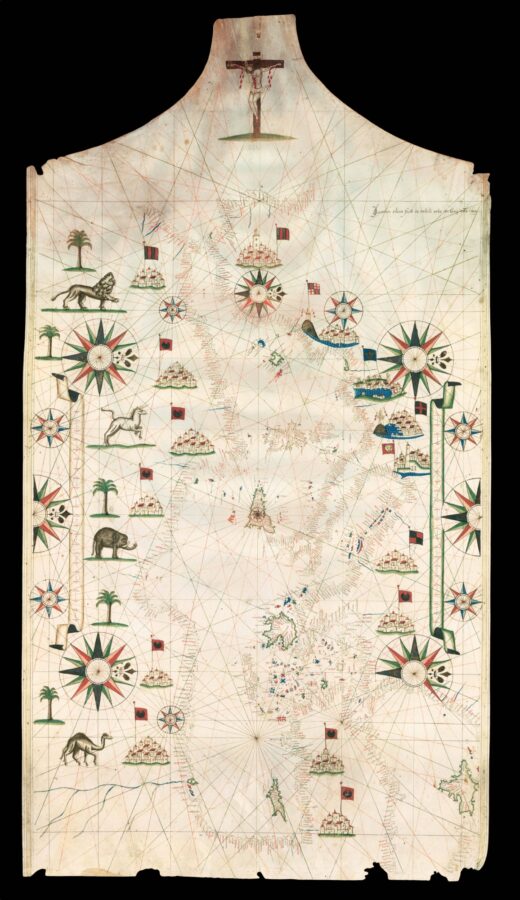 [Portolan Chart of the Mediterranean].

Finely drawn chart of the Mediterranean attributed to Joan Oliva.

The chart has been attributed to Joan Oliva (fl.1570–1614), a leading member of the Oliva family, a cartographic dynasty who dominated portolan production in Europe during the sixteenth and early seventeenth centuries. Charts signed by no fewer than 16 different members of the Oliva family are recorded between 1538 and 1673, and individual members apparently worked throughout the Mediterranean world, as their charts originate from Mallorca, Messina, Naples, Livorno, Florence, Venice, Malta, Palermo, and Marseilles. The exact relationships between the various members are unclear, but Joan appears to have been one of the most prolific and highly regarded. The earliest of his charts were executed in Messina, but he is also recorded as living in Naples as well as Marseilles, where he is thought to have died.

The present chart is a fine example of his work, with liberal use of gold leaf to the compass roses and crucifix. The coastline and cursive script are all finely drawn, and the whole chart is criss-crossed with lightly drawn rhumb lines. The eastern half bears similar stylistic traits with a signed chart dated 1599, and housed in the Biblioteca Nazionale Marciana, in Venice. The rendering of both Crete and Cyprus is almost identical, as are the placement of the rhumb lines.