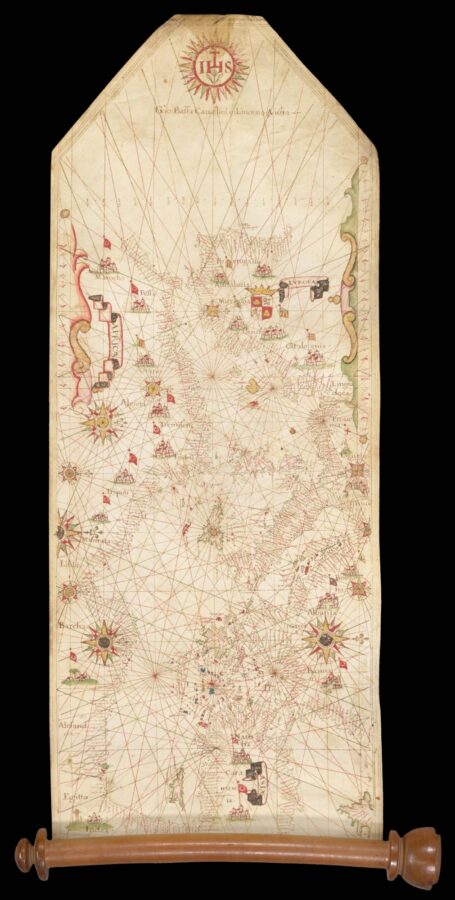 [Portolan chart of the Mediterranean].

Manuscript portolan chart representing the Mediterranean sea and the main coastal locations. It includes the names of the three continents ‑Europe, Asia and Africa- in banderols as well as the names of the major regions ‑counter-clockwise: Marocho, Fessa, Orano, Algieri, Tremisen, Tunesi, Tripoli, Misurata, Libia, Barcha, Alesandria, Egitto, Iudea, Soria, Caramania, Natolia, Romania, Graecia, Albania, Bosena, Friuli, Toscana, Liguria, Provenza, Linguadoca, Catalognia, Valenzia, Mucia, Andaluzia, Portogallo.
Italy in
Portolan charts originated in the thirteenth century as an aid for navigators. They use rhumb lines radiating from compass roses and other points in order to lay routes from harbour to harbour. Generally drawn on vellum and often embellished in silver and gold, they were, at their height during the fifteenth and sixteenth centuries, some of the most beautiful examples of the mapmaker’s art ever made.

The present chart was produced by Giovanni Battista Cavallini (fl. 1635–1656), who lived and worked in Livorno. It is believed that he was apprentice to Joan Oliva, a renowned portolan chart maker settled in the city in 1616, as his name was often included next to his.

In 1580, Ferdinand I declared Livorno as a free port, which allowed for merchants to trade goods free from duty within the city walls, transforming it into one of the main ports in Tuscany.

Livorno was also the base for the Tuscan fleet, the Order of Santo Stefano, founded by Cosimo I in 1561 with the purpose of protecting the Mediterranean from pirates and the Ottoman Turks. This drew to the city renowned cartographers from all across Europe, such as Robert Dudley, Vincenzo Volico, Joan Oliva and Giovanni Battista Cavallini, and favoured the flourishing of workshops specialised in cartographical tools, such as portolans.

It includes a Christogram and the author’s signature and date, Gio: Batta Cavallini in Livorno 1642 at left, the scale at top and bottom and ten compass roses throughout. It is beautifully decorated with figures of towns and flags and heightened in gold. Richard Pflederer records 15 institutional examples signed or attributed to Cavallini, two of which are jointly signed by Joan Oliva and Pietro Cavallini. We are only able to trace three works by Giovanni Cavallini that have come to market since the second world war.