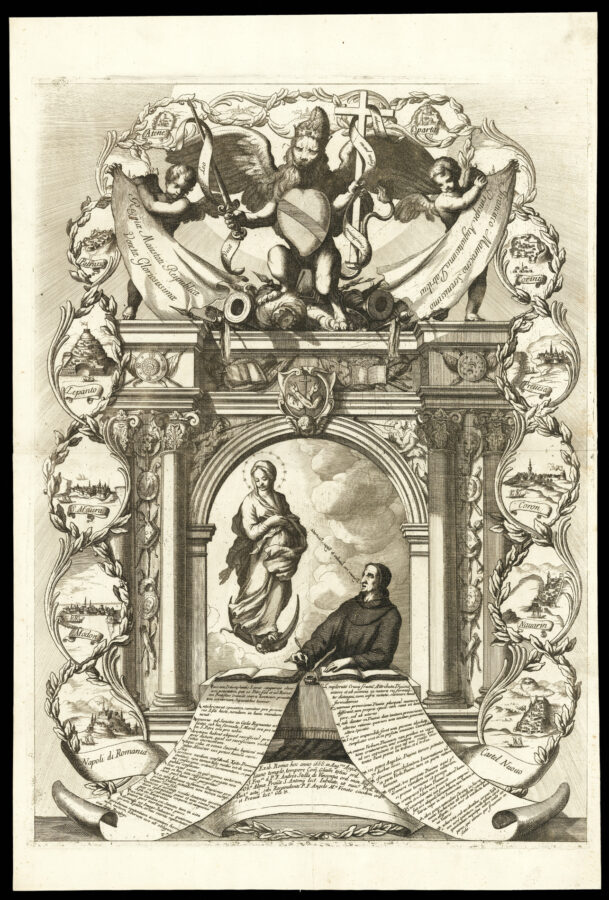 A broadsheet alluding both to Venice’s miliary prowess and its religious orthodoxy, probably created to celebrate the return of the fighting Doge, Francesco Morosini, in 1688.

The print depicts a (?Franciscan) scribe addressing the Blessed Virgin Mary of the Immaculate Conception in mirror writing (“Dignari me Laudari te, Virga Sacrata” — ​“make me worthy to praise you, Holy Virgin”), surrounded by a portico decorated with garlands containing vignette engravings of the ports of Greece (namely: Atene, Patrasso, Lepanto, M. Mauro, Modon, Napoli di Romania, Sparta, Corinto, Preuesa, Coron, Navarin, and Castel Nuovo). A great winged lion stands atop the portico with a a chest bearing the arms of Morisini, and carrying a sword and a cross staff, and surrounded by two canons.

The cities depicted are all scenes of memorable victories for the Venetian navy, and the location of both Athens and Sparta at the top corners of the sheet give the impression of Venice being the natural heir to both.

The religious text flowing from the two open books on the priest’s desk reveals an acrostic reading, somewhat ungrammatically, ​“marcus leo mari que terra que”
- possibly, ​“The lion Mark from the land to the sea” (though you would expect either a locative (if there is one) or the word ​‘ad’ with accusative ​‘marem’).. This may be assumed to be a reference to St Mark, one of the patron saints of Venice.

The print was, presumably, created to celebrate the installation of Morosini’s lion on top of the column outside the Arsenal. Jan Morris, in her ​“Venice” (chapter on curiousities, p211) writes:

​“The marble lion (that’s the big one) outside the Arsenal, arrived in Venice 1687. Brought by the fighting Doge, Francesco Morosini, from… Athens (this was when the Parthenon was blown up). He died in 1694”.

We are not aware of any other extant examples of this print.