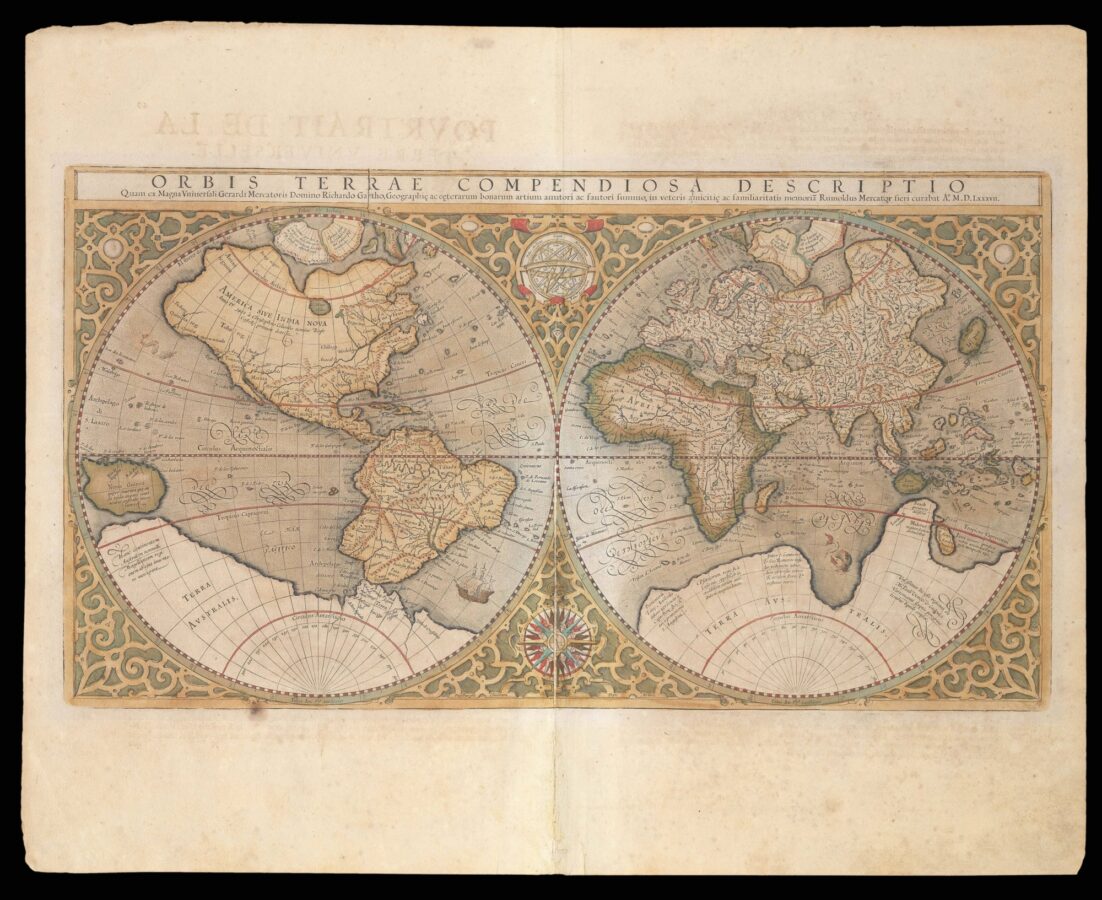 A complete set, in contemporary hand colour, of Mercator’s maps of the world and continents

An attractive set of Mercator’s maps of world and four continents with early hand colour, all from a French language edition of his celebrated atlas, ​‘Atlanta Pars Altera’. The set includes Orbis Terrae Compendiosa Descriptio, America sive India Nova, Europa ad Magnae Europae, Asia ex magna orbis terre, and Africa ex magna orbis terre. These are some of the most important maps of the sixteenth century.

World:
Rumold Mercator’s world map was based on his father’s great 21-sheet map of 1569, but is here condensed into double hemispherical form. Mercator uses a variety of sources in determining his geography, including contemporary manuscript charts as well as the writings of Marco Polo, Ptolemy, Mela, and Pliny. The arctic regions are based on the account of Englishman Nicholas of Lynn, who supposedly travelled there and stated that they were comprised of four roughly circular land masses. At the southernmost part of the world, he includes a vast yet imaginary land mass, Terra Australis. The map is surrounded by an attractive strapwork border, with a compass rose and an armillary sphere at center.

America:
One of the cornerstone maps of America, illustrating much of what was known and what was assumed about the continent during the late 16th century. This single hemisphere map shows both North and South America, and includes New Guinea to the west of the continents, a large landmass called Terra Australis to the south, and two of the four islands of the North Pole at the top of the map. The map’s accuracy is mostly confined to the eastern coastline, since those areas at that time had been more thoroughly explored. Some of the more famous cartographic fallacies present on the map include a large inland lake in North America, which has been posited to be the earliest representation of the Great Lakes, the northwest passage, and a mythic city of gold named Quivira. An innacurate prominent bulge from the southwest coast of South America is present. The central map is surrounded by an elaborate mannerist border of acanthus leaves and cornucopia, as well as four roundels. One of the roundels contains the cartouche, and the other three show Cuba, Hispaniola and the Gulf of Mexico, all Spanish spheres of influence in the New World.

Gerard Mercator died in 1594, leaving his son Rumold to bring his life’s work, the world’s first modern and scientific atlas, to completion. A number of maps still had to be engraved, including the present map, and he employed various members of the Mercator family as engravers. This map was engraved by Michel Mercator, Gerard’s grandson. This is the only printed map known to have been engraved by Michel, despite his obvious skill.

Africa:
Engraved by Gerard Mercator Junior, this map shows the continent of Africa with a greatly exaggerated northwest coast. Madagascar’s size is also exaggerated. The mythical Christian king Prester John is shown seated in a throne near the banks of the Nile in central Africa. The mannerist decorative cartouche includes exotic fruits and is flanked by two satyrs, a reference to the continent’s perceived richness and wildness.

Asia:
This map of Asia was engraved by Gerard Mercator Junior, and is therefore another one of the five maps included in Mercator’s 1595 world Atlas that was not made by the family patriarch. It shows the area stretching from the Arabian Peninsula to an imaginary north coast of Australia. Japan, Java, New Guinea and the Philippines’ sizes are exaggerated, and the Korean peninsula has been omitted.

Europe:
Rumold Mercator, the heir to Gerard’s publishing firm, engraved this map of Europe. It shows cities, waterways, forests, some topography, and it includes an ornate mannerist cartouche. 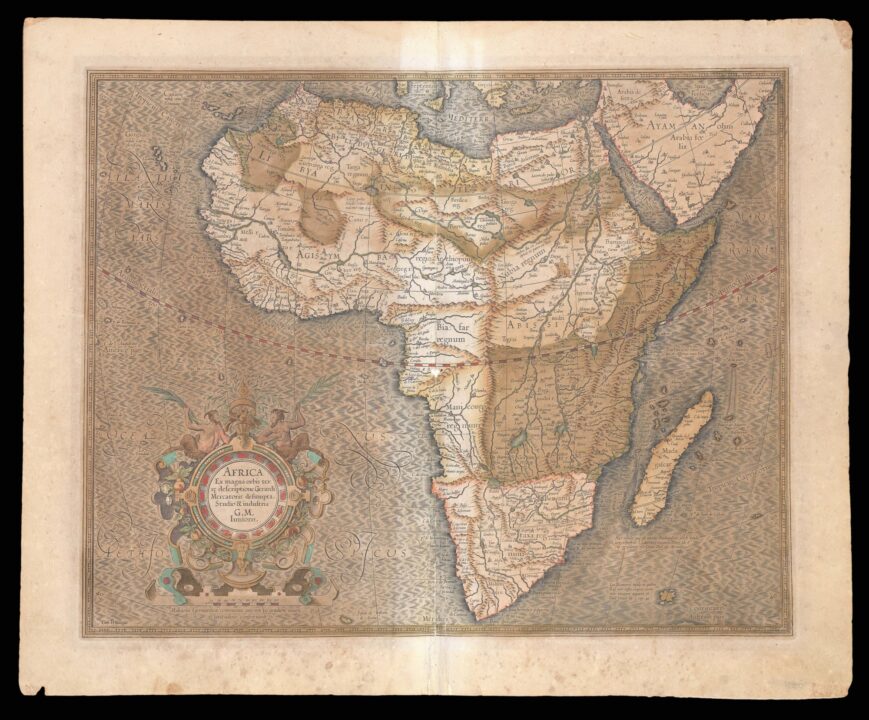 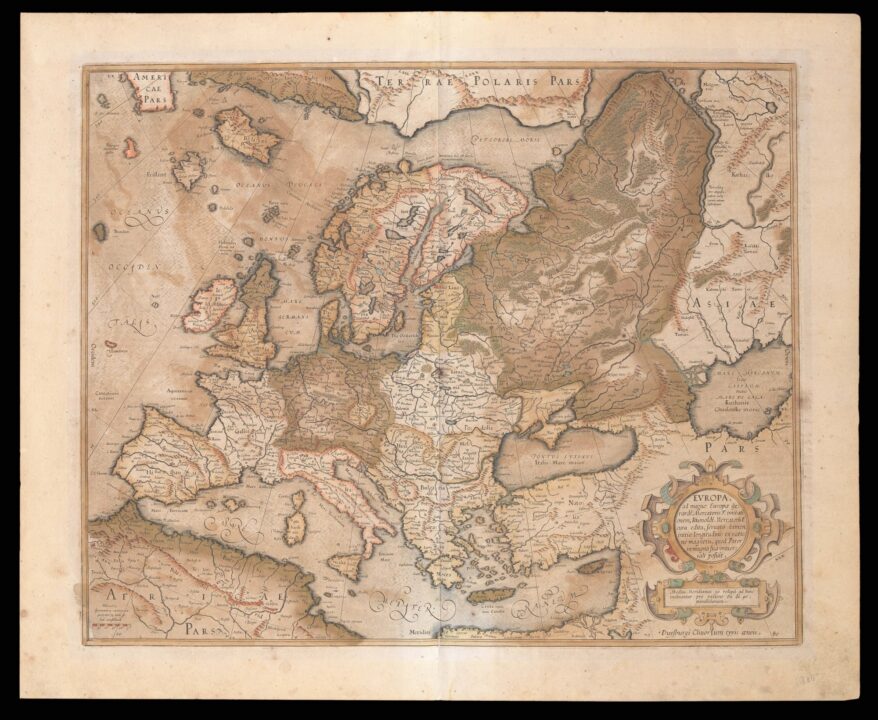 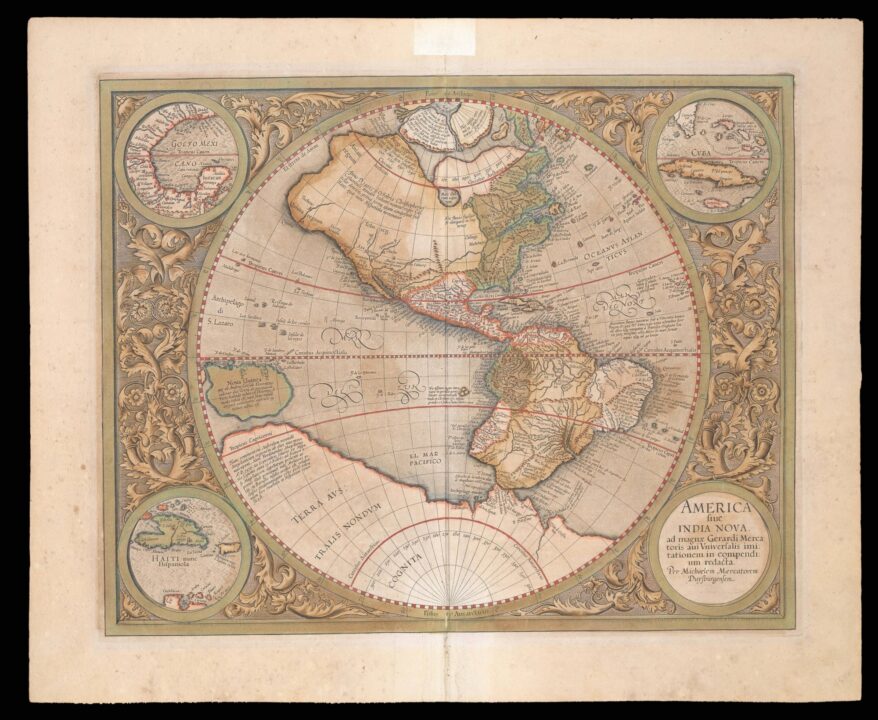 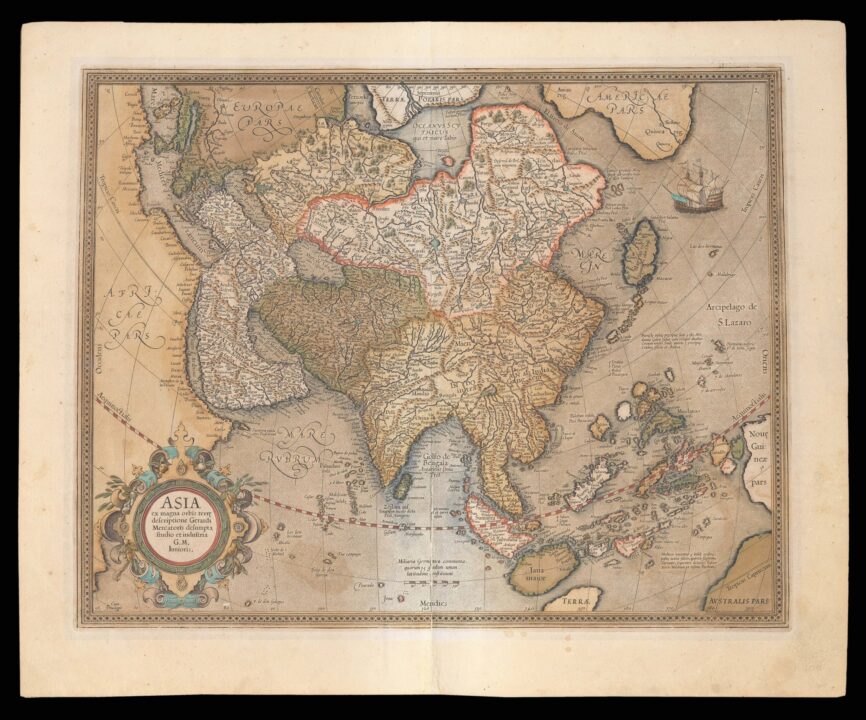