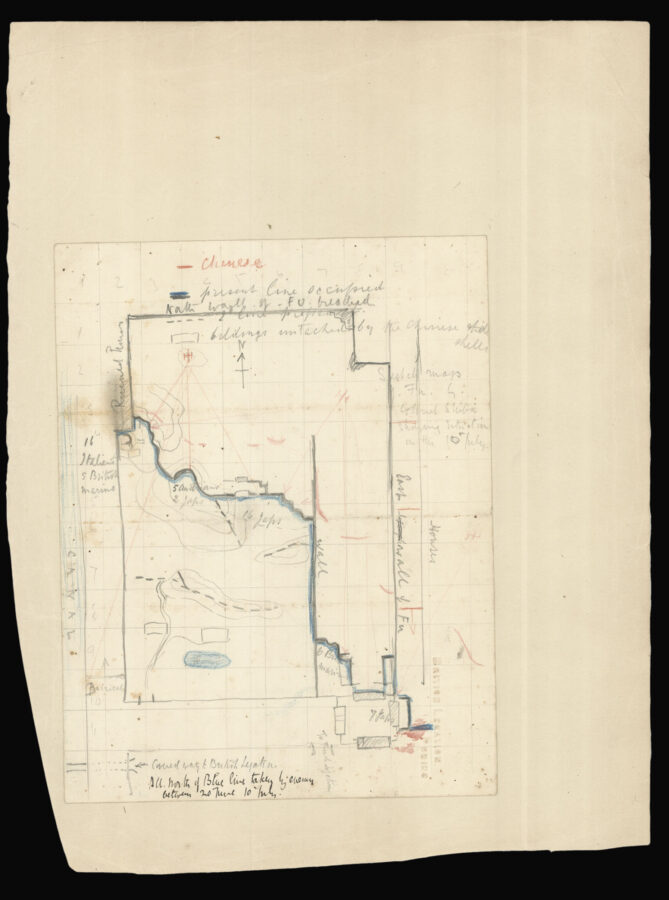 A collection of contemporary documents from the Boxer Rebellion

This unique manuscript plan of the Peking Legation Quarter records the positions of the two opposing sides during the most tense conflict of the Boxer Rebellion.
The Yihetaun Movement was a violent uprising in China at the turn of the twentieth century, inspired by the proto-nationalist sentiments of United in Righteousness, a militant group commonly referred to as ​‘Boxers’. They condemned the presence of colonial and Christian influences in the country, and were incensed by the disruption that had resulted from the growth of foreign powers. Their activities grew increasingly violent throughout the late1890s until, against a background of severe drought, Boxer rebels converged on Beijing (then known as Peking). They marched on the city with the aim of ​“supporting the Qing government and exterminating the foreigners”. In fear of extermination, foreigners and Chinese Christians fled to the Legation Quarter, the foreign diplomatic centre in the city. Their panic was justified, as Empress Cixi sided with the Boxers and issued an imperial decree declaring war on foreign powers.
Combined forces from Japan, the United Kingdom, America, France Russia, Germany, Italy and Austria-Hungary formed the ​‘Eight-Nation Alliance’ to combat the Chinese attacks. The Boxers responded by besieging the Legation Quarter in the summer of 1900, during which the head of the British diplomatic embassy, Claude MacDonald, later stated that the 13th July was ​“the most harassing day”. The present plan maps the movements of both sides during this engagement, with an annotation explaining that ​“all north of blue line taken by enemy between 20th June — 10th July”. A newspaper clipping attached to the map recounts how the allied forces, led by British Lietenant-General Gaselee, liberated the Legation Quarter the following month, with the British the first to breach the Boxers’ siege lines. The rebellion was formally ended in 1901 with the Boxer Protocol, a settlement under which China was forced to pay a large indemnity to the foreign powers and accept that ​“the quarter occupied by the legations shall be considered as one specially reserved for their use and placed under their exclusive control, in which Chinese shall not have the right to reside and which may be made defensible”.
Included alongside the map are five photographs taken inside the Legation Quarter, helping to illustrate what life was like for the British troops stationed in Beijing during the conflict. One shows a tennis court set on the mountainside, which is referenced in the account of Wilkinson, a student interpreter at the British Legation. He records that ​“in summer there was tennis on the Legation lawn, and in the grounds of the residence of the young European employees of the China Maritime Customs, as well as garden parties at the American Legation”. Two other photographs capture the Quarter’s extensive gardens, filled with trees, bridges and pavilions. Wilkinson concedes that ​“it was an attractive place in which to stay. Only the water-tower and the dingy brick power-plant spoilt the pleasant effect of trees and lawns and flowering shrubs. The large extent of the grounds deadened the noise of the city outside as well as attracting various wild birds — crows, cuckoos, magpies, hoopoes, woodpeckers and orioles.” A further photograph shows a line of Indian soldiers standing to attention in front of their barracks; as part of the British Empire, Indian forces played a key role in its military engagements. The final photograph appears to have been taken from a boat, leaving or arriving at the U.S. Quarantine Wharf in the port of Tianjin, which was the main maritime gateway to Beijing. Tianjin was central in the conflict, since the Boxers cut the railway line between the port-city and Beijing in order to completely isolate the latter, making it difficult for the Eight-Nation Alliance to coordinate an organised attack.
The picturesque scenes shown in the photographs seem far removed from the very real dangers posed by the rebellion, a contrast acutely captured by this intimate and unique collection of contemporary documents. 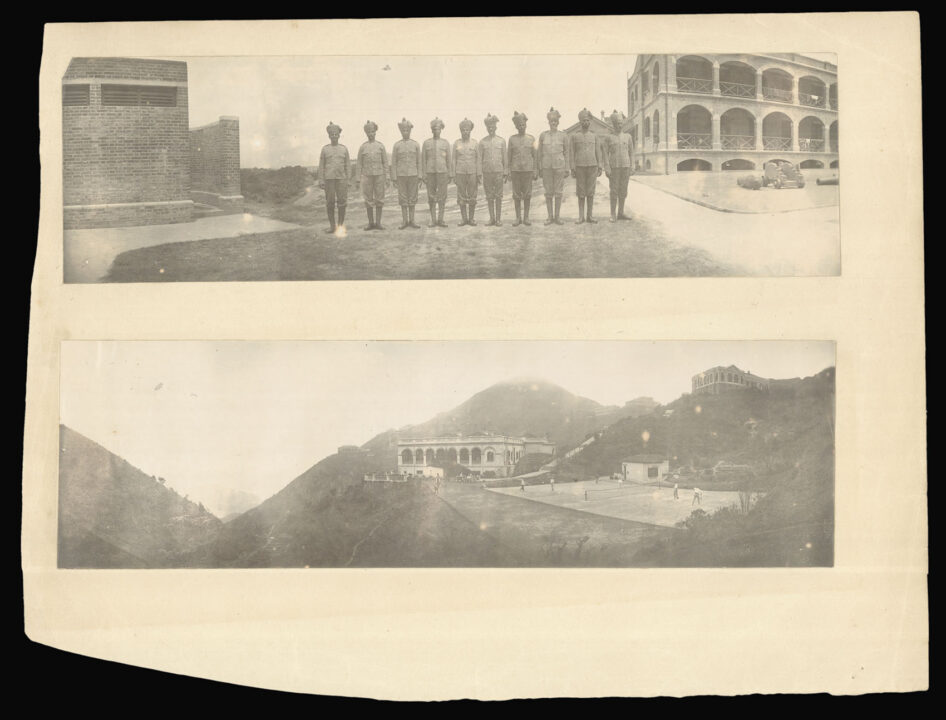 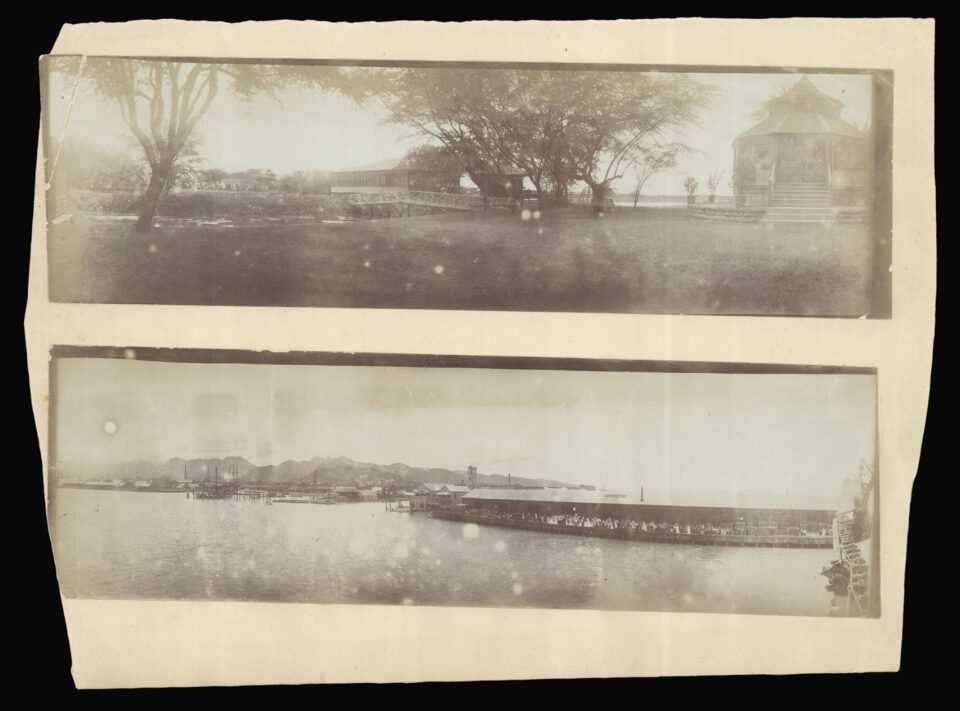 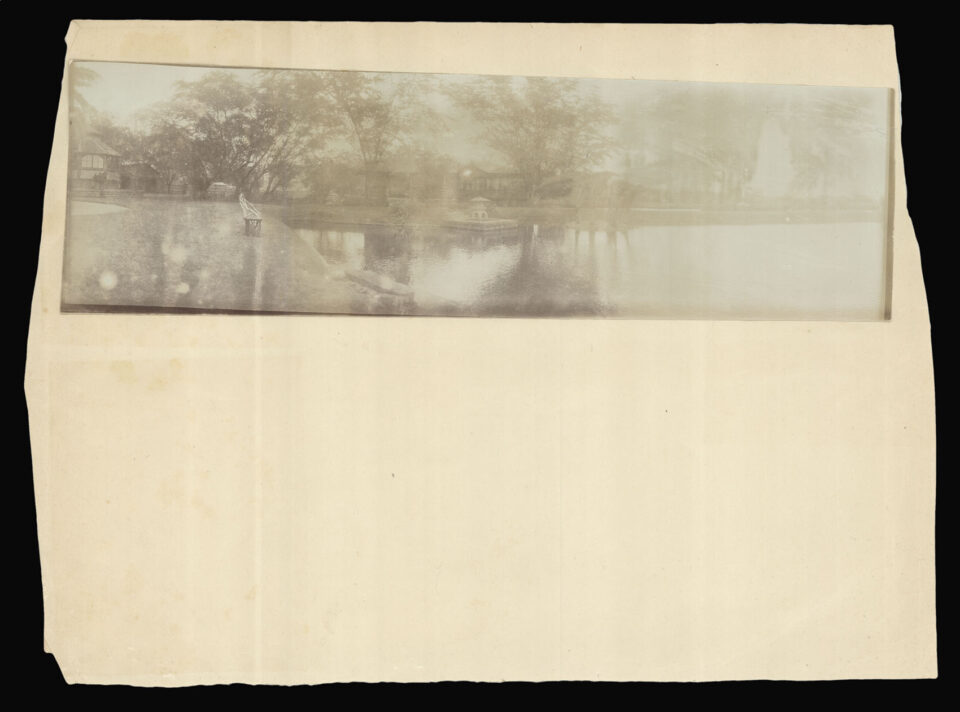