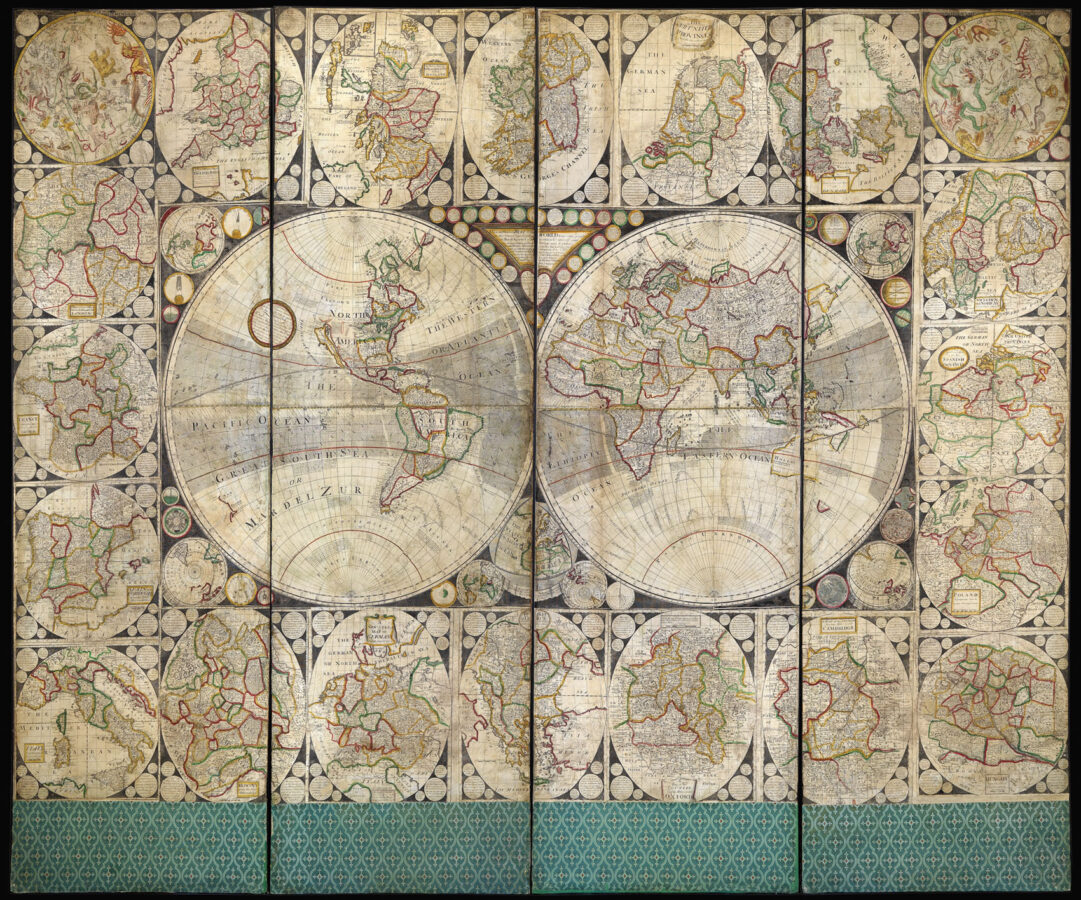 George Willdey’s magnificent atlas of World in the form of a screen.

The present screen consists George Willdey’s large four-sheet world map, surrounded by twenty oval or circular maps, and was advertised by Willdey in the Post Man (issue 4112) on the 23rd — 25th November 1721:

​“A large New and Correct English Map of the World, laid down according to the newest and most accurate Observations and Discoveries made by the Royal Society of London, and the Royal Academy of Sciencies [sic] at Paris, in several different Projections, including the Trade Winds, Monsoons, Variations of the Compass, and illustrated with the Ptolemick, Copernick, and Tychonick Systems, and the Appearances of the Planets, and shews the Hour of the Day in every Kingdom, and Place upon the Earth; with many useful and ornamental Explanations: This Map is 3 Foot 4 Inches deep, and 6 Foot 4 Inches long, and round the same is added, instead of useless Ornaments, a Set of 20 different New Sheet Maps, of the Principal Kingdoms and States of Europe, with particular Historical Explanations to each Map, so as to make it when put together, with its proper Colours and Illuminations, one of the largest, beautifullest, most useful, and diverting Ornaments, as well as best Set of Geography ever yet done of this kind; the Names of the Maps aforesaid, are a Northern Celestial Hemisphere, a Southern, ditto England, Scotland, Ireland, 20 Miles round London, 20 Miles round Oxford, 20 Miles round Cambridge, Germany, France, Spain, Italy, Sweedland, Poland, Denmark, Muscovy, Hungary, the Turks Dominions in Europe, Flanders, and the Seven United Provinces. This Set of Maps may be fitted up several ways and sizes, or bound in a Book, or Sold single, to fit Gentlemens Conveniency; it is done by the Direction and Charge, and Sold by George Willdey, at the Great Toy, Spectacle and Print-Shop, at the Corner of Ludgate street, next St. Pauls, London; where Gentlemen may be furnished with large 2 sheet Maps, fine Prints, Cutlers Ware, and Curious Toys in Gold, Silver, and other Curious Metals and Materials the best of Spectacles, Tellescopes, Reading Glasses, Perspective Glasses, &c. of all which no Person in Europe hath better Goods, better Choice, or Sells more Reasonable.“

As one can discern from the elaborate — and somewhat overwrought — text in the above advertisement, George Willdey (?1671–1737) was a flamboyant London shopkeeper and self-publicist. His principal business was a a toy-man and seller of luxury goods, jewellery, gold and silver trinkets, and china. However, he was perhaps the first mapseller to widen the appeal of maps from an intellectual elite to the general public. In this respect the map screen must be seen as his most ambitious attempt to broaden their appeal. That he was successful in his aim can be seen from the fact that the playwright John Sheridan mentions them in his comedy, ​‘School for Scandal’ — some 50 years later — in 1777. As Peter Barber states in the entry on the British Library’s example, exhibited in their Magnificent Maps exhbition, in 2010:

​“They [the screens] would have given a flattering impression of the extent of its owner’s knowledge and interests, and would have provided an informal geographical education for family, visitors and servants alike.”

Although evidently popular throughout the Georgian Period, only two other examples of Willdey’s work are known:

1) British Library — dated circa 1750; the world map bearing the imprint of Thomas Jefferys, who had purchased the plates from Willdey’s son following his father’s death in 1737. The arrangement of the circular and ovoid maps differ slightly from the present example.

2) Maclean-Fogg Collection, Chicago — unfortunately, we have been unable, at this present time, to inspect the screen to ascertain its precise date and arrangement of the maps. One must note that the Maclean-Fogg Collection also holds a six panelled screen, which consists of the Willdey’s world map in the same state as the present example, but framed by twelve, two-sheet maps, by the cartographer Herman Moll.

1. WILLDEY, George. A New and Correct Map of the World Laid Down According to the Newest and Most Accurate Observations & Discoveries made by the Royal Societys of London and Paris. In several different projections. Including the Trade Winds, Monsoons, Variation of the Compass, and Illustrated with the Systems of Ptolemy, Copernicus, Tycho Brahe, together with the Appearances of ye Planets, including a Clestial Planisphere. With many other useful Instructions and Explantions.

5. [WILLDEY, George] Ireland According to the the latest Improvements

6. [WILLDEY, George] Holland or the VII United Provinces from the latest Observations.

10. [WILLDEY, George] A New and Correct Map of the Ten Spanish Provinces.

13. [WILLDEY, George] A Map of the Country Twenty Miles Round Cambridge.

14. [WILLDEY, George] A Map of the Country Twenty Miles Round Cambridge.

15. [WILLDEY, George] Turkey in Europe Corrected from the Newest and Most Accurate Observations.

19. [WILLDEY, George] Spain and Portugal from the Latest Observations.

21. [WILLDEY, George] A New and Correct Map of Twenty Miles Round London.

N.B.There is Published and Sold with or without Said Map Twenty Different Sheet maps of the Principal Divisions of Europe. 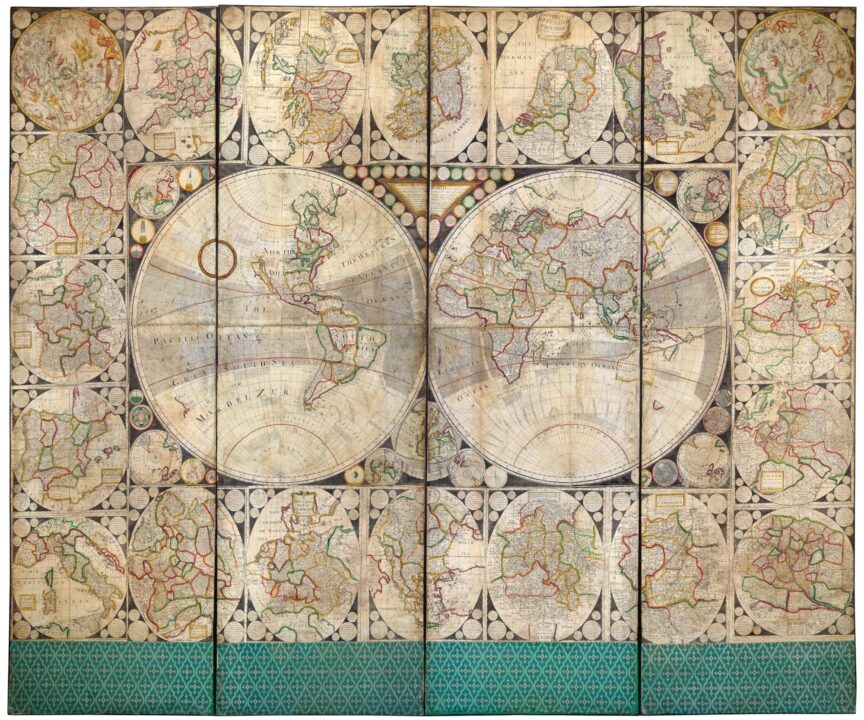 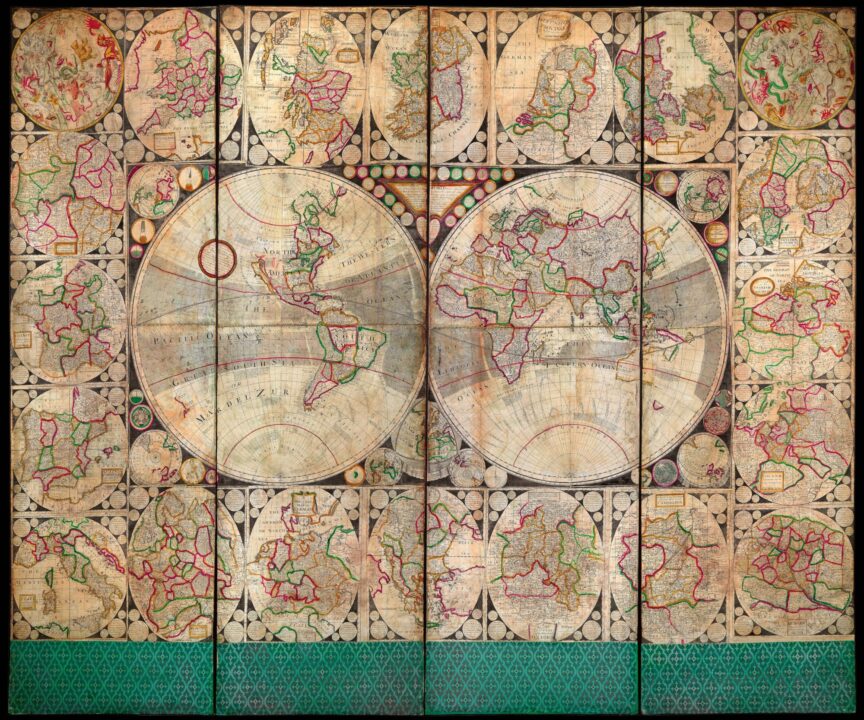 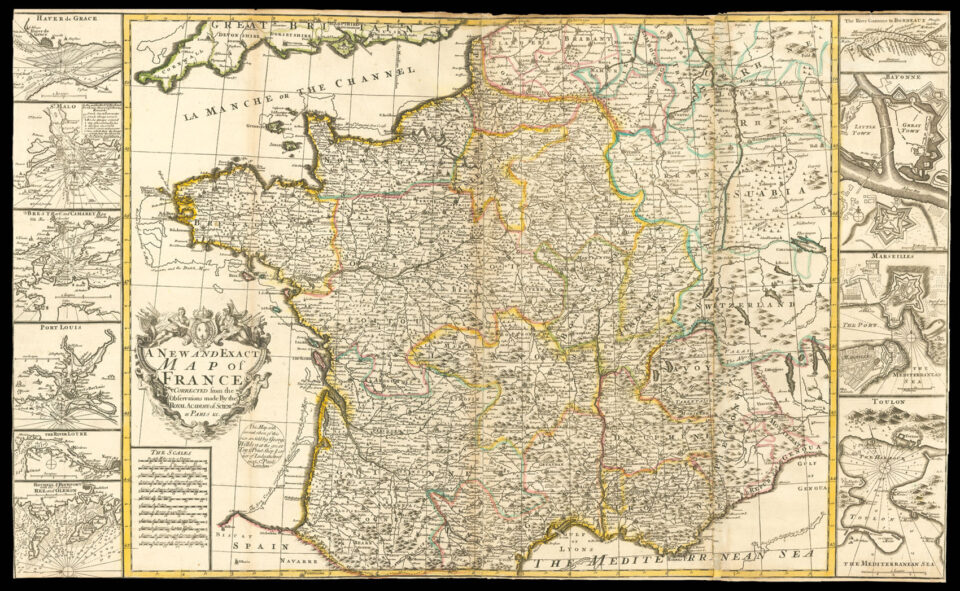 George Willdey c.1710
A New and Exact Map of France Corrected from the Observations made By the Royal Academy of Sciences at Paris &c.