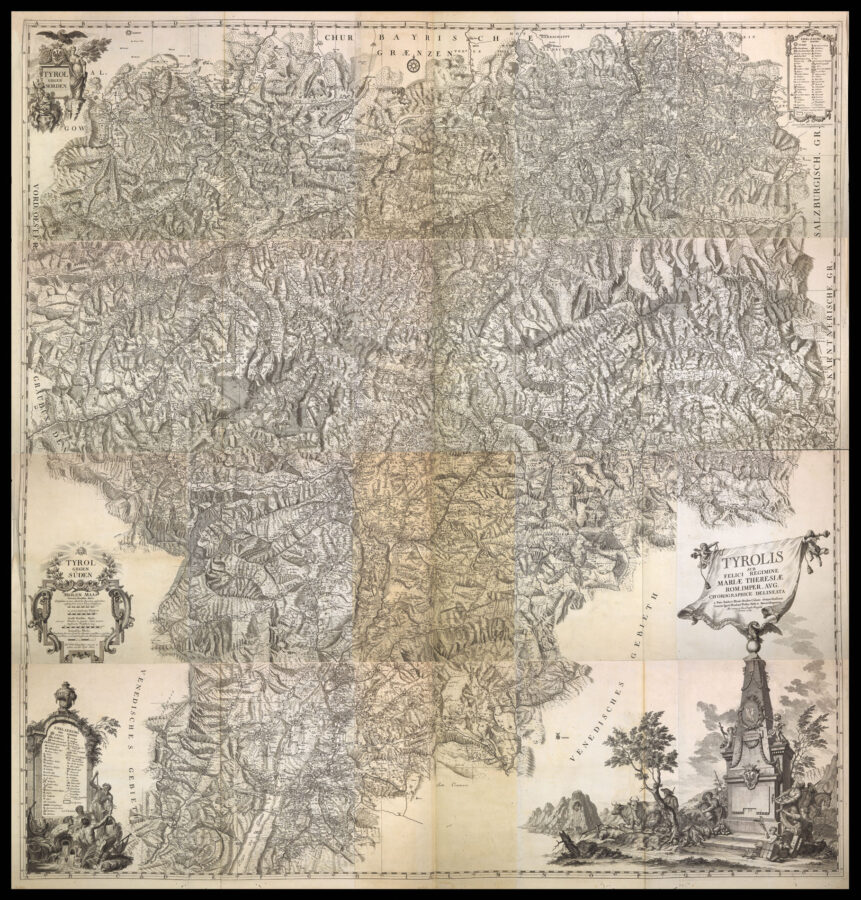 “… one of the most beautiful topographical works of this century”

Large wall map of the Tyrol.

The three men who were responsible for this monumental map: Peter Anich, Blasius Hueber, and Anton Kirchebner, all originated from the small village of Oberperfuss, ten miles west of Innsbruck.

Peter Anich (1723–1766) was a pupil of Ignaz Weinhart,a jesuit professor in Innsbruck, was a highly skill scientific instrument maker. It was said that he once produced a celestial globe so large that a wall of his house had to be taken out in order for it to be removed. This work — and most probably the story attatched to it — brought him to the attention of Count Enzenberg who commissioned him to complete the mapping of the Tyrol started by von Sperges. Von Sperges had begun surveying the south of the Tyrol, and its border with Venetia, upon a scale of 1:121,000, who had published his results in 1762. However, the scale proved too small for Anich, who had begun to survey the northern Tyrol upon a scale of 1:103,000. His work was completed by 1764, and the engraving of the plates were begun by Weinhart and his pupil Blasius Hueber. The Viennese authorities, wishing to save the cost of further surveying work, ask for the plan to drawn upon the same scale as von Sperges. Wienhart conscience of the benefits of Anich’s more detailed survey, successfully petitioned the authorities and and in the summer of 1765 both Anich and Hueber were sent out to resurvey the southern Tyrol. However, the surveying came to an abrupt halt when both men contracted swamp fever. They were taken back to Oberperfuss to convalesce, and although Hueber recovered Anich grew steadily weaker and passed away on the 1st September 1766.

The rest of the surveying was left to Hueber who employed his nephew Anton Kirchebner as an assistant; they concluded their fieidwork on the 25th July 1769; work then begun on engraving, the map being published in 1774.

The completed work was a huge advance on the previous mapping of the area, and drew much acclaim, most notably from the French General Staff, who not only copied the map, but also said: ​“Cette carte est un de plus beaux ouvrages topographiques de ce siècle”. Hueber for his efforts received a gold medal from Maria Theresa, together with a yearly stipend of 200 gulden.