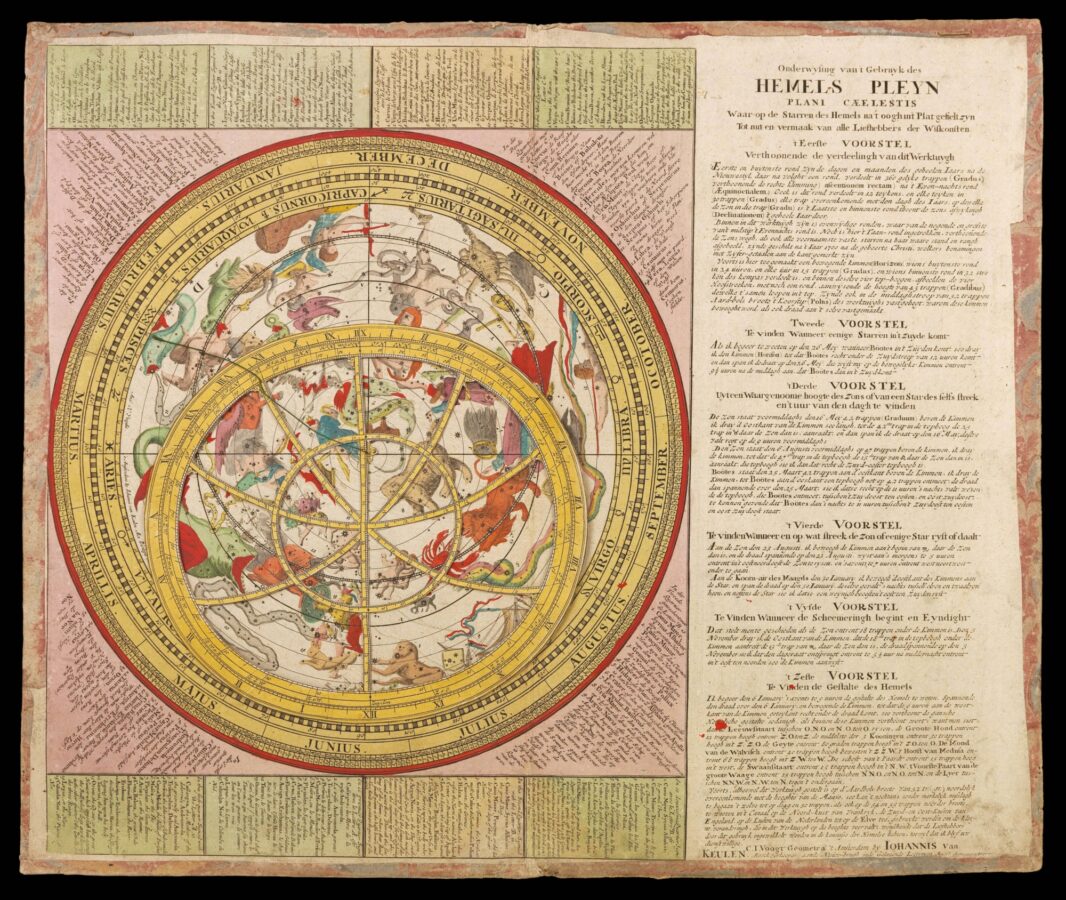 The chart shows the stars visible from 52 degrees latitude in a polar equidistant projection, with a rotating volvelle or rete to indicate the part of the sky visible at a particular moment. The circular border around the sky image and the outer part of the volvelle include scales with several kinds of data so that the chart can be used for various purposes. One can use the string to align the time in the volvelle with the date in the border of the chart, so that the part of the sky visible at that moment appears inside the volvelle. The chart with its volvelle, scales and string can also be used to calculate times for the rising and setting of constellations at various dates (or to calculate the present time based on the position of the stars). Fifty-three constellations are numbered quarter by quarter (15, 9, 14, 15), with a Dutch key identifying them in each corner and a French and an English translation in strips of panels at the head and foot. The instructional text, describing six ​“proposals” (the first explaining the different scales, etc., and the others giving examples of the use of the chart), stands to the right of the chart itself, and with the text were printed together from a single plate. If the ring is turned with 12 midnight to the right, the boards can be folded to each other like a portfolio, protecting the chart and making it easier to carry. It appears to have been published in this form, for the copy at the Dutch Maritime Museum in Amsterdam is similarly coloured and mounted to make a similar marbled portfolio.

The only other complete copies we have located, at the Boerhaave Museum in Leiden and the Adler Planetarium in Chicago, are also in portfolio form. Though designed for use at a latitude of 52 degrees, the text suggests it remains accurate from 49 to 55 degrees, which would allow its use through much of northern Europe.

Although astrolabes had long used a rotating off-centre ring to denote the part of the sky visible at a given time, such a ring combined with a planispherical star chart (like the cardboard or plastic star finders still popular today) often is supposed to be a nineteenth-century invention. Jan Jansz. Stampioen’s 1664 chart seems to be the earliest well-documented chart of this kind, though some suppose his father’s ​‘Coelestum Planum’, mentioned in a 1619 patent and documented in 1621, was such an instrument, and Kepler’s son-in-law, Jakob Bartsch, is also said to have made something similar. Vooght clearly based his chart on Stampioen’s 1664 edition, published by Hendrik Doncker with text by Dirk Rembrandtsz. Van Nierop. Neither it nor the 1684 version (also apparently published by Doncker) is known to survive (unless the latter was the chart alone, without volvelle or instructive text), so that Vooght’s version in its present first state is the earliest known example. Comparison with a c. 1722 edition printed from Doncker’s original plate suggests that Vooght followed Stampioen closely, with the same 53 constellations (the latest introduced by Mercator and Plancius in the sixteenth and early seventeenth centuries) and the text in the corners describing them copied word for word and line for line.

In 1678/79 Van Keulen (1653/54–1715) set up at the address in the present chart (at the sign of the Crowned Pilot, opposite the new Bridge) and in 1680 he and Vooght (c. 1637?-1696) began to publish their charts with the privilege granted then, and re-granted to cover the years 1695 to 1710. The chart in its present first state must date between 1680 (since it notes the fifteen-year privilege) and 28 August 1696 (four months after Vooght’s death), when Johannes Loots described Vooght’s chart as new in an advertisement for his edition, also separately issued. his instructional text (by Simon van de Moolen, not mentioned in the advertisement) appears on a separate slip pasted over the engraved text, so his edition must be later than Van Keulen’s. The present chart, moreover, makes no reference to Vooght’s 1696 death. The chart is also mentioned in a list of Van Keulen publications in the ​‘Zee-Fakkel’ (Bom, not specifying the edition), though supposedly including Spanish text, presumably for the constellations (Bierens de Haan probably based his description on the same advertisement). The instructional text notes that the stars are depicted in accordance with the year 1700 (“na haar waare stand en rangh afgebeeld, zijnde geschikt na ​‘t Jaar 1700”), but such charts were often calculated for a round-numbered year a few years in advance. The chart later appeared in some copies of Van Keulen’s atlases, though without volvelle in the only example we have located: his 1708/09 ​‘Zee-Atlas’ (part I) at the Dutch Maritime Museum in Amsterdam (Koeman IV, keu 28, map 6: De Vries appears to err in citing a copy in Koeman IV, keu 110B, the 1709 ​‘Zee-Fakkel’ at the Amsterdam university Library; and the Cat. nhSM , p. 50, errs in citing a copy in a 1684 edition of the ​‘Zee-Atlas’). Thiele reports a copy in a 1681/1686 atlas, not now located. In numerous Van Keulen atlases from 1682 to 1695, Koeman reports two versions of a different celestial chart, but not this one.