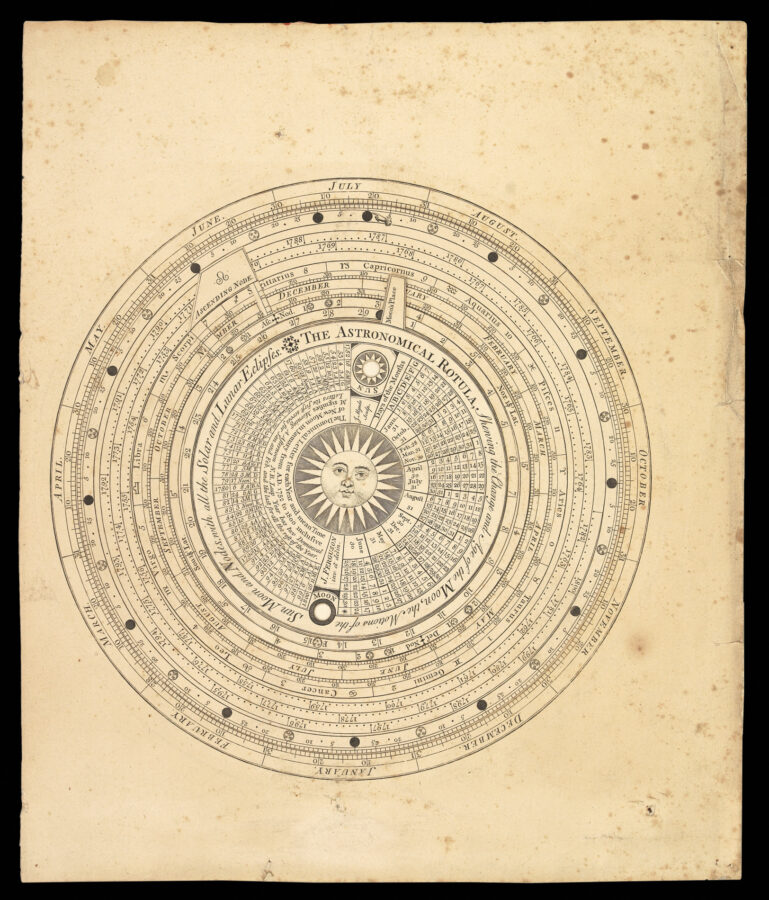 The wheelwright of the heavens

The Astronomical Rotula Shewing the Change and Age of the Moon, the Motion of the Sun, Moon and Nodes, with all the Solar and Lunar Eclipses.

The instrument takes the form of four volvelles over a circular scale, the central volvelle with an engraved face of the sun. These volvelles are designed to show the ecliptic with its twelve signs through which the sun travels in twelve months, to the circle of twelve hours, similar to the dial plate of an early clock, the hour-hand to the sun, and the minute hand to the moon: moving in the ecliptic, the one always overtaking the other at a place farther than it did at their last conjunction. This shows the motions and places of the sun and moon in the ecliptic on each day of the year perpetually and, consequently, the days of all the new and full moons from the years 1752 until 1800.

James Ferguson, astronomer, instrument maker, lecturer, natural and experimental philosopher, was born in 1710 at Core of Mayen in the east-most corner of Banffshire. His father was a cottar and too poor to provide him with any formal education. However, his aptitude for learning soon became apparent. At seven, he learned to read by listening to his father teach the catechism to his elder brother. At ten, to earn his keep, he was sent to tend sheep for a neighbouring farmer, and what little spare time he then had was devoted to his developing interest in astronomy, making maps of the stars using beads and thread.

In 1763 he was chosen a fellow of the Royal Society, without the usual fees. Ferguson’s influence extended widely in his own lifetime: he was the first to form a nebular theory, Thomas Paine mentioned him in his publication ​‘The Age of Reason’, and William Herschel studied astronomy from his books. However, it is, perhaps, as one of the first popularisers of science that his main influence was felt. Ferguson created a number of orreries and machines to illustrate his lectures, and published several books and paper instruments including: ​‘Astronomical tables and Precepts’ (1763); ​‘Introduction to Astronomy’ (1769); ​‘Astronomy explained’ (1772); ​‘Lectures on Mechanics, hydrostatics, Pneumatics, and optics’ (1772); ​‘Select Mechanical exercises’ (1773); ​‘The Art of Drawing in Perspective’ (1775); and ​‘An Introduction to electricity’ (1775).
/