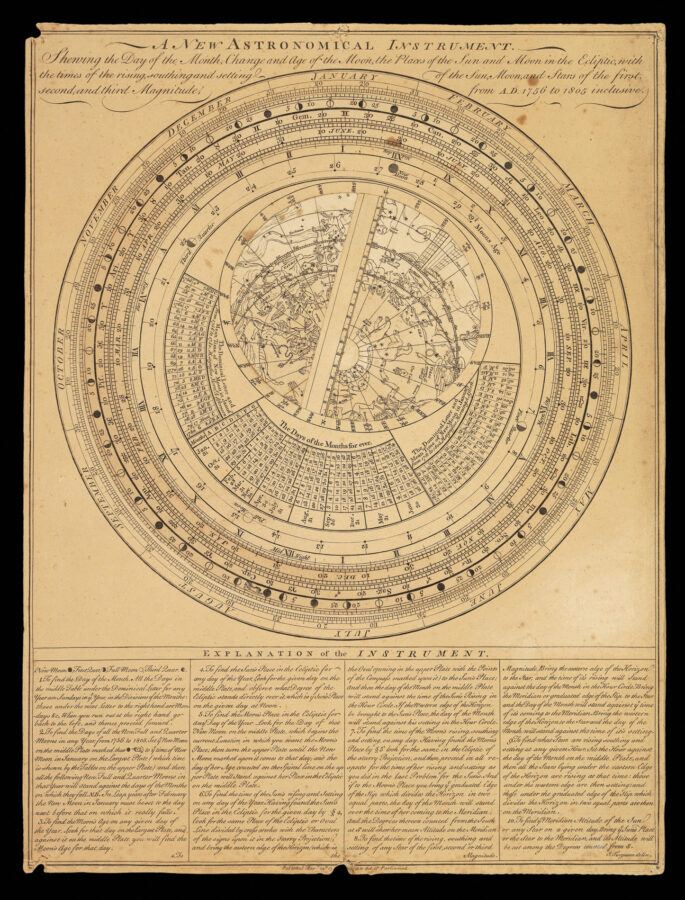 “The times of the rising, southing and setting of the Sun, Moon and Stars”

A New Astronomical Instrument Shewing the Day of the Month, Change and Age of the Moon,the Places of the Sun and Moon in the Ecliptic, with the times of the rising, southing and setting of the Sun, Moon and Stars to the first, second and third Magnitude, from A.D. 1756 to 1805 inclusive.

The instrument takes the form of two volvelles over a circular scale.

The first volvelle is graduated around the circumference in hours, followed by age of the moon in days, with representations for quarter, full and new moons. The central section has an off-centre ellipse cut out to show constellations of the northern hemisphere on the volvelle beneath. The chart also shows the graduated ecliptic and equinoctial and is transversed by a scale on the top volvelle 0–90°-0. The remainder of the top volvelle shows tables for the dominical letter and mean time of the new moon in January and ​“The Days of the Months” forever.

The second volvelle has the star chart in the centre and scales around the circumference for days of the month and days of the houses of the zodiac, with the ages of the moon throughout the year with pictorial representations. Both volvelles rotate within a circular calendar scale on the main sheet. Below the instrument is an explanation of use.

An advertisement at the end of Ferguson’s ​‘Description and use of the astronomical rotula’ (1775) mentions:

​“8. A new Astronomical Instrument. Showing all the problems of the RotuLa, except the eclipses; and instead thereof, the times of the Rising, Southing and Setting of the Sun, Moon and Stars” 5s 6d.

James Ferguson, astronomer, instrument maker, lecturer, natural and experimental philosopher, was born in 1710 at Core of Mayen in the east-most corner of Banffshire. His father was a cottar and too poor to provide him with any formal education. However, his aptitude for learning soon became apparent. At seven, he learned to read by listening to his father teach the catechism to his elder brother. At ten, to earn his keep, he was sent to tend sheep for a neighbouring farmer, and what little spare time he then had was devoted to his developing interest in astronomy, making maps of the stars using beads and thread.

Undaunted by the lack of access to books in his younger years, he set about discovering the principles of mechanics for himself, making models of the machines he saw, including a weight driven wooden clock with a broken bottle chime ‒ the only materials he had available. The clock kept quite good time, so he attempted to make a watch ‒ the size of a cup ‒ but getting it to work proved beyond the limits of wooden wheel and whalebone spring technology. 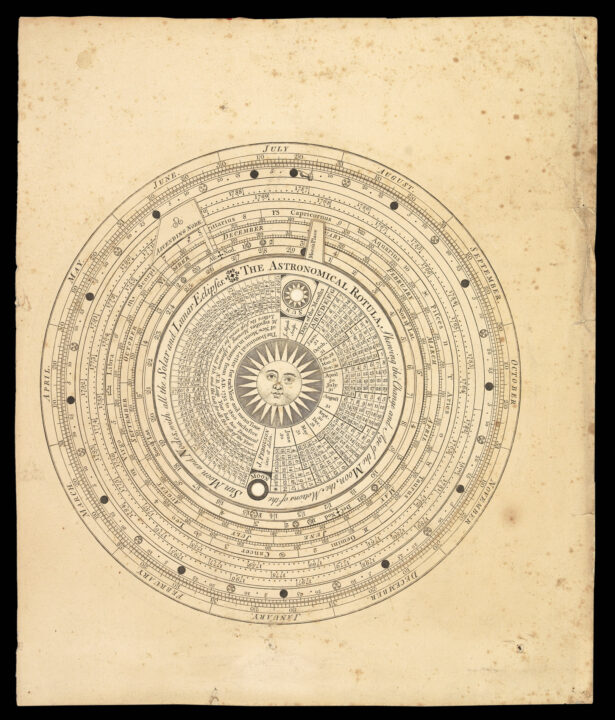