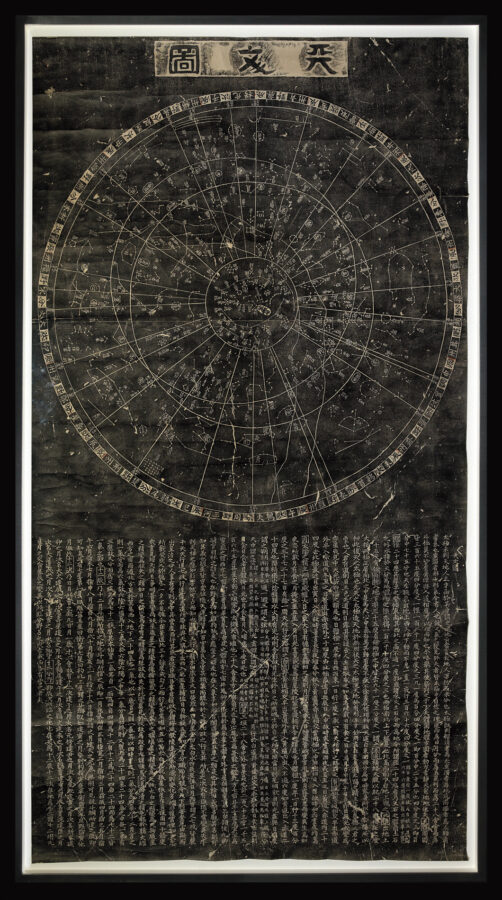 By Wang Zhiyuan after Huang Shang, 1247

A rubbing of a thirteenth century astronomical stele from Wen Miao Temple (Confucian Temple of Literati) Suzhou, Kiangsu, China; prepared for the instruction of a future emperor. The stele survives in the Suzhou Museum of Inscribed Steles.

The chart was engraved on stone in 1247 by Wang Zhiyuan, but it is based upon an earlier drawing by Huang Shang, made c1190-1193 at the beginning of Shaoxi in the Southern Song Dynasty, while he was entrusted by the emperor as his son’s tutor. Reproductions of the stele, such as the present chart, were taken from an ink-on-paper rubbing, like a brass rubbing; as a result, the stars and lines appear white on a black background.

​“The planisphere depicts the sky from the north celestial pole to 55 degrees south. Radiating lines, like irregular spokes, demarcate the 28 xiu (akin to the Western Zodiac system). These lines extend from the southern horizon (the rim of the chart) to a circle roughly 35 degrees from the north celestial pole; within this circle lie the circumpolar constellations, i.e. those that never set as seen from the latitude of observation.

Two intersecting circles represent the celestial equator and ecliptic, which the Chinese called the Red Road and the Yellow Road respectively. An irregular band running across the chart outlines the Milky Way, called the River of heaven – even the dividing rift through Cygnus can be made out. All 1464 stars from Chen Zhuo’s catalogue are supposedly included (an inscription on the planisphere tallies the total as 1565, but this is clearly an ancient Chinese typographical error [and a recent count suggests that the stele depicts a total of 1436 stars]); not all of the stars show up on the rubbing, however” (Ian Ridpath).

The text below the chart gives instruction to the new emperor with information on the birth of the cosmos; the size and composition of both the heavens and the earth; the poles; the celestial equator (the Red Road) and the ecliptic (the Yellow Road); the sun; the moon, and the moon’s path (the White Road); the fixed stars; the planets; the Milky Way (or the River of heaven); the twelve branches; the twelve positions; and the kingdoms and regions.

It is difficult to ascribe a precise date to the rubbing; there were periods in the seventeenth century when rubbings were popular with the early Jesuits in the Kangxi court, and again in the eighteenth century in the Kangxi through early Qianlong courts, but equally in the late nineteenth and early twentieth centuries during european archaeological explorations of the region.

The present example is mounted on nineteenth century oriental paper, which would indicate that the rubbing was taken c1890, or earlier. Whilst several institutions, such as the Suzhou Museum of Inscribed Steles and the national Library of China in Beijing, hold similar rubbings, we are not aware of any other example on the market in the past 50 years.