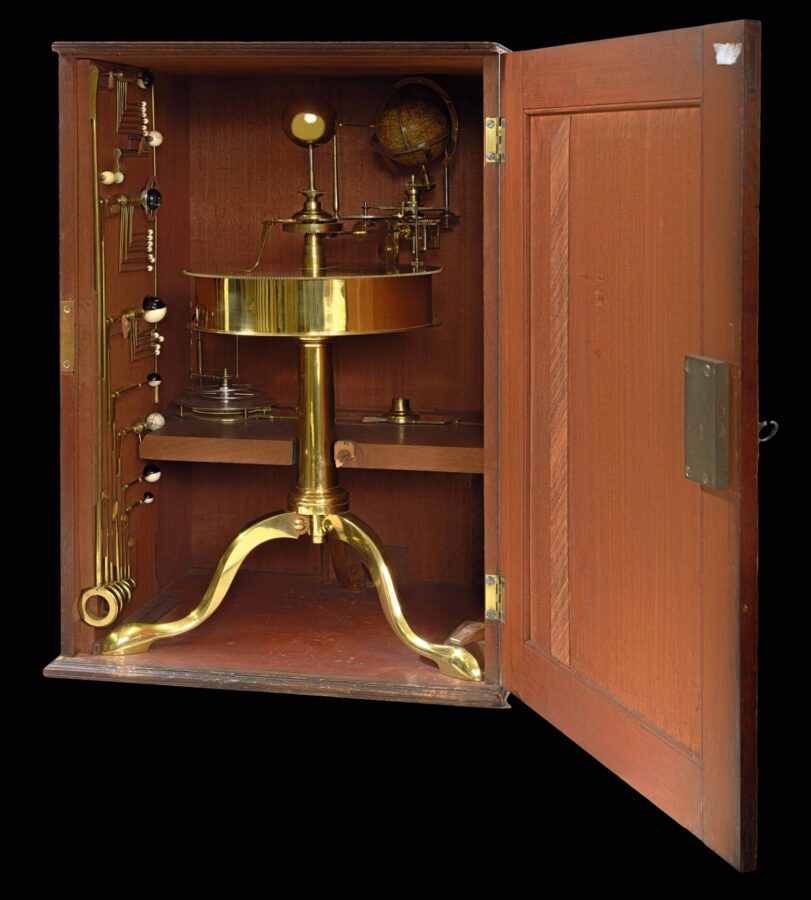 The Solar System in a box

A rare complete orrery fashioned for the travelling astronomer.

Biography
Thomas Blunt (1735/45–1823) was an English scientific instrument maker based in London. He apprenticed with Edward Nairne and later became his business partner, setting up a shop with him on Cornhill from 1774 to 1793. They sold telescopes and microscopes, surveying and marine instruments, reading glasses, globes and ​“electrical machines”, for which Nairne was famous. Blunt was member, and for some time Master, of the Spectacle Makers’ Guild, and by 1794 he had acquired the honour of ​“Mathematical Instrument Maker to His Majesty”. He separated from Nairne and opened a new shop just two doors down, and trained three of his sons.

Mechanics
The present orrery can be labelled ​“Martin-type” due to its simplified mechanism, which was popularised by the leading British scientist Benjamin Martin (1704/05–1782), who was also known for publishing one of the earliest English dictionaries. He wrote and lectured on science and astronomy, eventually setting up a shop on Fleet Street where he sold, and potentially also built, instruments of all types from reading glasses to solar microscopes. His low prices and itinerant speaking helped make scientific knowledge accessible to the British public, and in 1764 he was asked to re-supply Harvard with instruments after a fire at the university. Towards the end of his life he failed to win a fellowship to the Royal Society and fell into bankruptcy, but he was still acknowledged by contemporaries to be one of the greatest mathematicians of the age on his death.
Martin was particularly concerned that elaborate orreries demanded too high prices and were thus only found in the collections of wealthier patrons. He therefore suggested a system where the planets would be moved by only two gear wheels each, reducing the mechanism to its simplest form. The periods would not be as accurate as those of grand orreries, but they would be sufficient for demonstration purposes.

In this example, the orrery can be set up in three ways by means of its attachments:
1. Planetarium, with arms for each planet, to display the scale and movements of celestial bodies in the Solar System.
2. Tellurian, carrying the larger Earth-globe, to show the Earth’s movement and its relationship with the Sun, therefore explaining the progression
of day and night, the change of seasons and eclipses.
3. Lunarium, with the Earth and Moon spheres, to show the Moon’s rotation and its relationship with the Earth and the Sun.

Brass orreries of any type rarely to appear on the market.

From the Collection of Rachel Lambert Mellon (1910–2014), American horticulturalist, philanthropist and art collector. 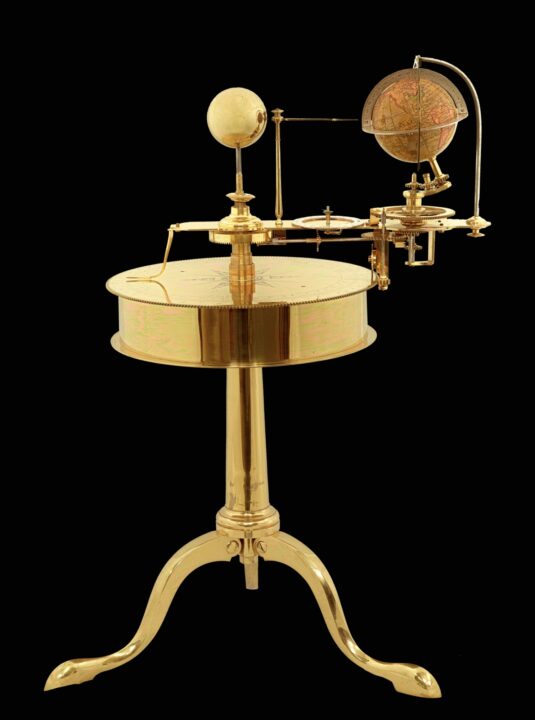 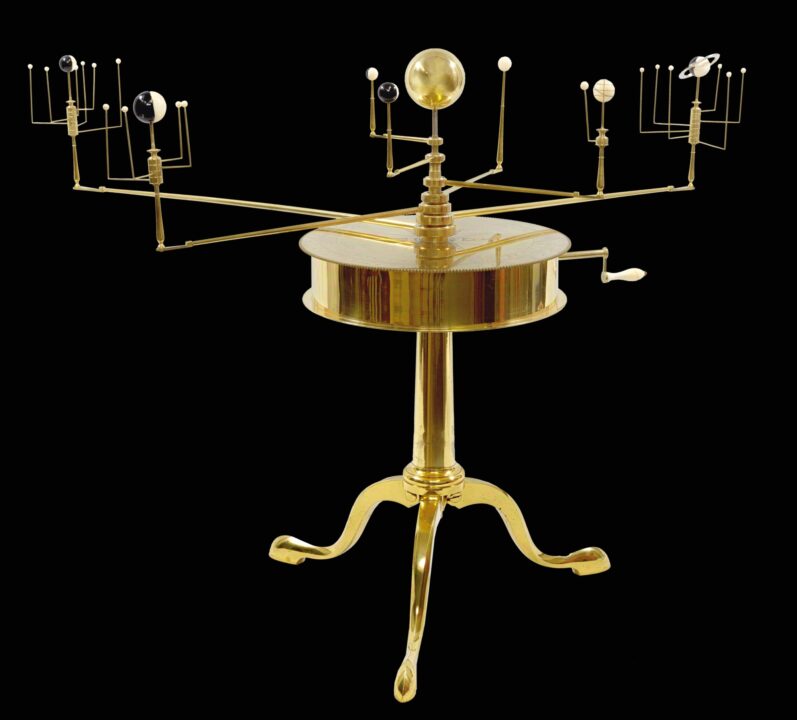 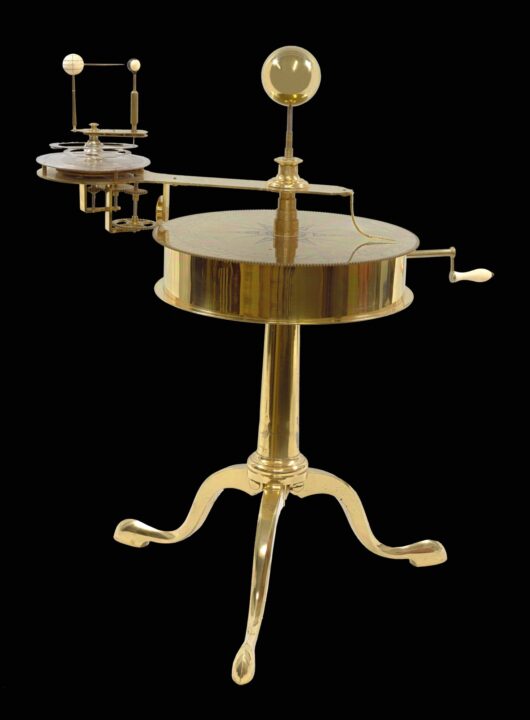 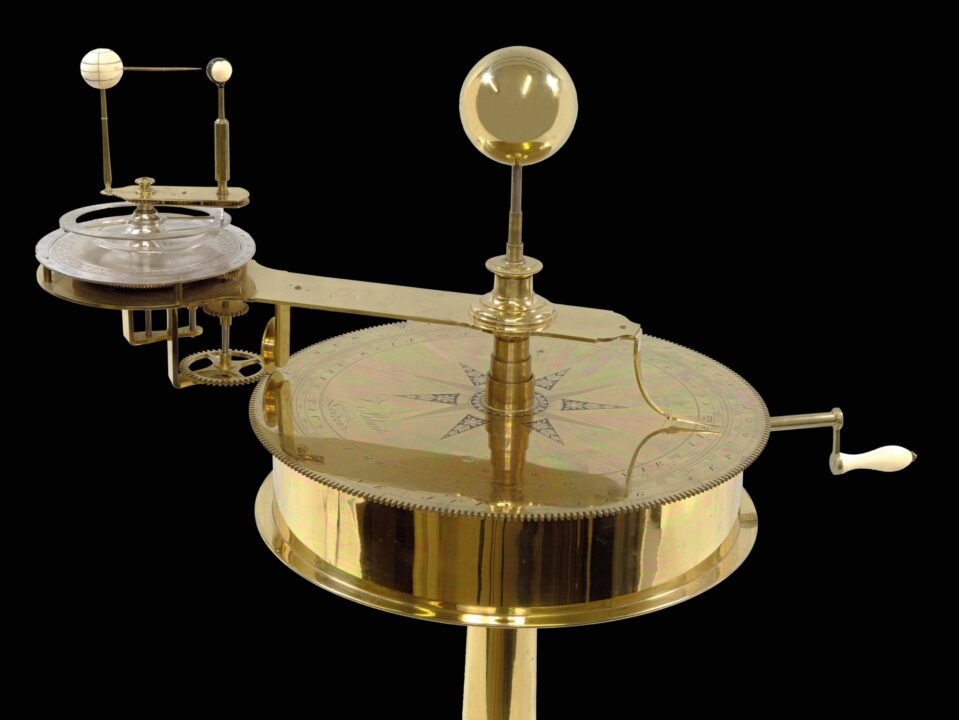