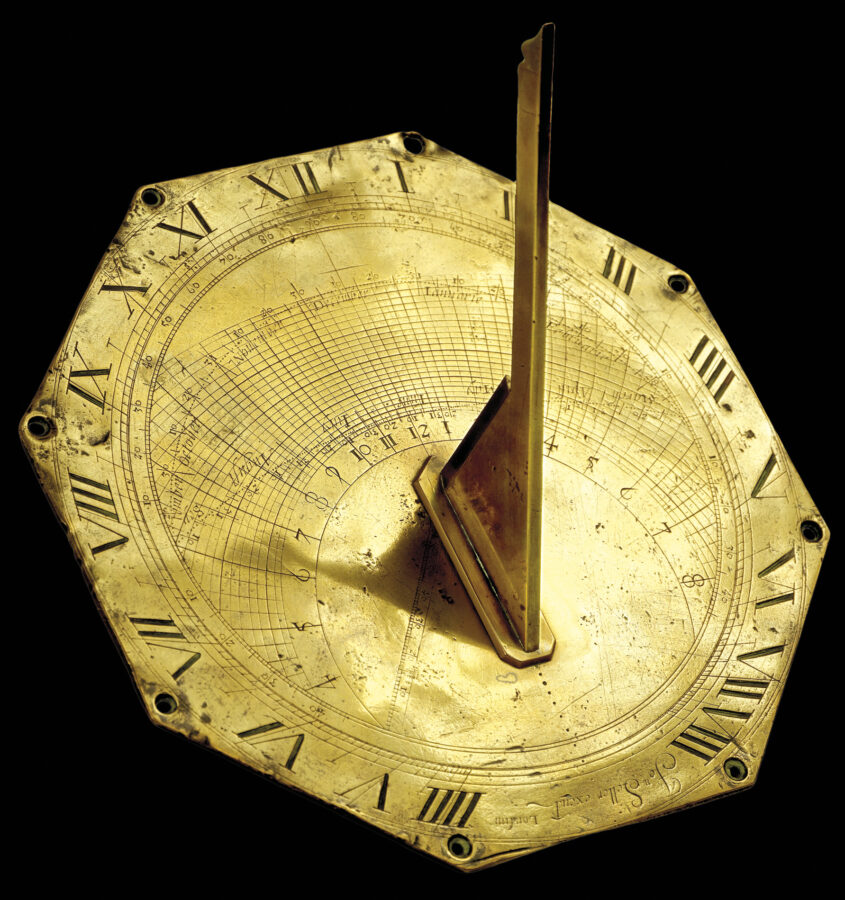 Elias Allen produced several dials after the design of his friend, William Oughtred. The present example conforms closely to one held in the National Collection at Greenwich (AST0232). Known as ​“double horizontal” dials because they have two scales for reading the hours using the angled side of the gnomon, and the vertical supporting edge, this second edge shows the lines of solar declination, the ecliptic and the right ascension of the sun. They were useful not only for telling the time, but also for demonstrating the motion of the sun throughout the day and year, being able to also calculate the altitude of the sun and its azimuth as well as showing the position of the sun on the ecliptic. As an instrument, they enjoyed a flourish around the mid-to-late seventeenth century, but not many appear to have been made post-1700. Interestingly, Samuel Pepys wrote in his diary for 3rd June, 1663:

​“Up betimes, and studying my double diall… Dean Honiwood comes to me, who dotes mightily upon it and I think I must give it him.” And on the 4th June: ​“Home by water, where by and by comes Dean Honiwood, and I showed him my double horizontal diall, and promise to give him one, and that shall be it”.

Elias Allen (c.1588–1653) was apprenticed to Charles Whitwell of the Grocers’ Company. He was renowned in his day and had a close relationship with contemporary mathematicians. He joined the Clockmakers’ Company in 1633 and became their Master in 1637–8. He produced a wide range of precision measuring instruments.

John Seller (1632–1697), in addition to being a leading mathematical practitioner and mapmaker of his day, was also something of a colourful character — or rogue — who enjoyed the Royal patronage one year, and was jailed in Newgate the next. It seems that he may have acquired the remaining stock of Allen’s workshop on his death in 1653 and passed a few instruments off as his own work — certainly this is the only known dial that bears his signature and, when examined closely and compared to other Allen dials, has even incorporated elements of Allen’s signature.