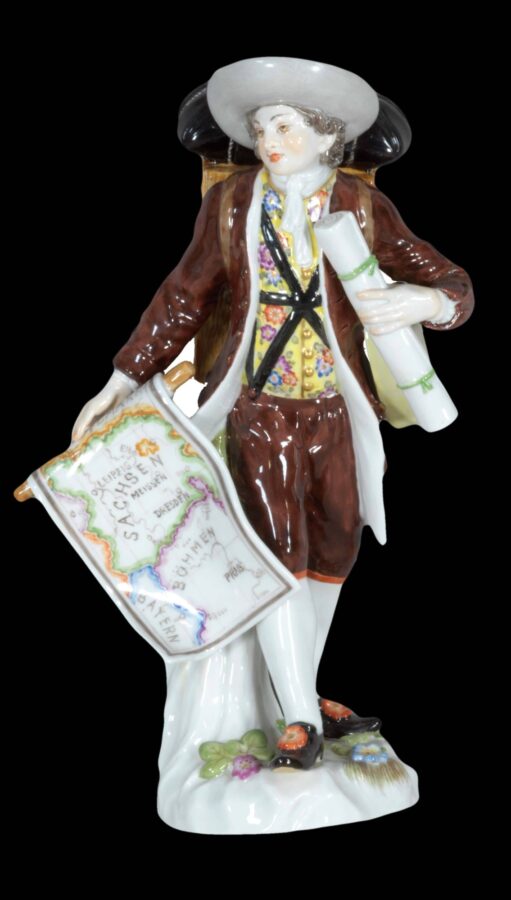 [Porcelain figure of a mapseller]

The popularity of Chinese and Japanese porcelain, which began to be imported into Europe by the Dutch East India Company during the seventeenth century, encouraged many attempts to recreate the material within the continent. Most of the early attempts failed, but in 1706, Ehrenfried Walther von Tschirnaus began conducting experiments using kaolin, a key component of true porcelain. After Tschirnhaus’s sudden death, his work was continued by Johann Friedrich Böttger, who had previously been held in custody by King Augustus II of Poland after he made the false claim that he could produce gold from worthless materials. Although his alchemical aspirations came to nothing, Böttger did refine the porcelain-making method invented by Tschirnhaus and in 1707, Augustus established the Royal Porcelain Factory at Meissen, where production started the following year.

The company’s initial products were imitations of popular oriental designs but they soon expanded to include European animals, landscapes and flowers. By closely guarding the ingredients and method that went into its hard-paste porcelain, Meissen long maintained a monopoly over the industry. After one of their craftsmen sold the secret recipe, however, new porcelain businesses cropped up across Europe. As a result, Meissen introduced its logo of two crossed swords, typically painted in blue, to protect and verify its products; the signature is believed to be one of the earliest trademarks in existence.

In spite of growing competition, Meissen’s reputation and the generous patronage of Augustus II ensured that the company still attracted some of the finest artists and artisans in the field. Consequently, Meissen continued to occupy a leading role in stylistic innovation for much of the eighteenth century. Among its most important developments were the porcelain figures that became immensely popular as household ornaments.

These were the innovation of Johann Joachim Kändler, who became chief modeller for the Meissen company in 1733, and remained in the post for the following four decades. With the help of his assistants, Johann Friedrich Eberlein and Peter Reinecke, he produced Rococo figurines of people and animals, which went on to become highly influence throughout Europe. The human figures mainly consisted of courtiers, shepherds, allegorical personifications, and characters from commedia dell’arte or wearing exotic costumes. In the 1740s and 1750s, however, Meissen began to produce some more realistic figurines, including a series of miners and a set based on a print series by Edmé Bouchardon.

Edmé Bouchardon was a French sculptor responsible for several neoclassical statues in the gardens of the Palace of Versailles, as well as the equestrian statue of Louis XV in the Place de la Concorde. In addition, he was a painter and draftsman, producing a celebrated series of engravings of working-class Parisians. These included the ​‘Criers of Paris’, a series of romanticised images showing various street-vendors such as a trinket-seller, a flower girl and a map-seller. Kändler followed Bouchardon’s engravings very closely when producing his three-dimensional versions in porcelain.

The present example shows the map-seller, taking a step forward on a mound base applied with flowers, foliage and a tree-stump. In his right hand he holds an unfurled map showing eastern Germany, while in his left is another scrolled map. On his back, he carries a trunk and a black package, and he is wearing a wide-brimmed hat, brown coat, yellow floral waistcoat, brown breeches and black buckled shoes. Other examples of this figurine are painted in different colours, and display different maps on the unfurled sheet in his hand. It is a later version of the mapseller figurine produced by the Meissen company in the twentieth century, and shows no significant differences from the original. 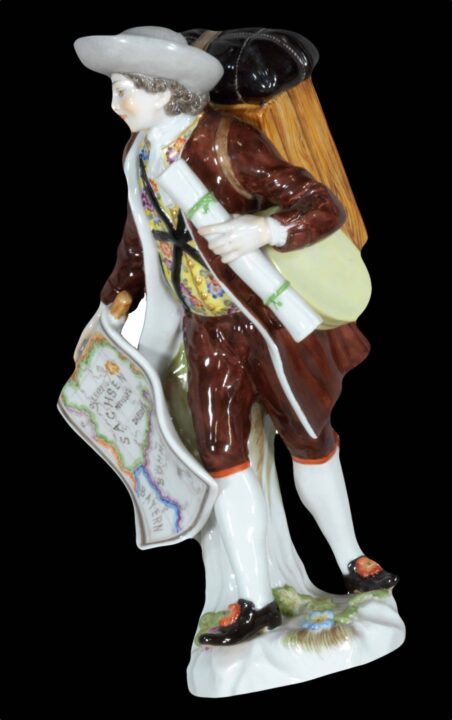 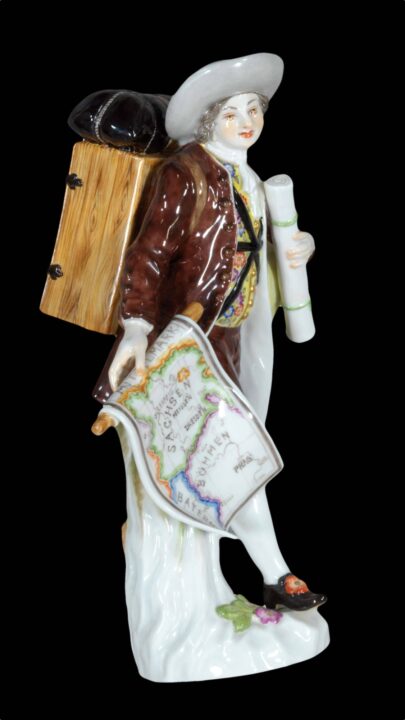 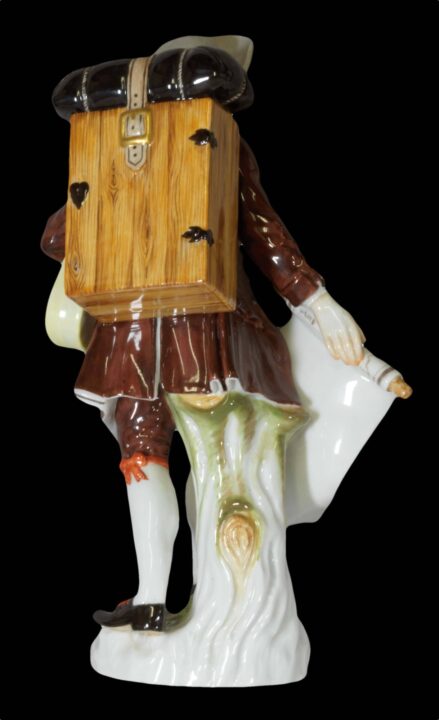