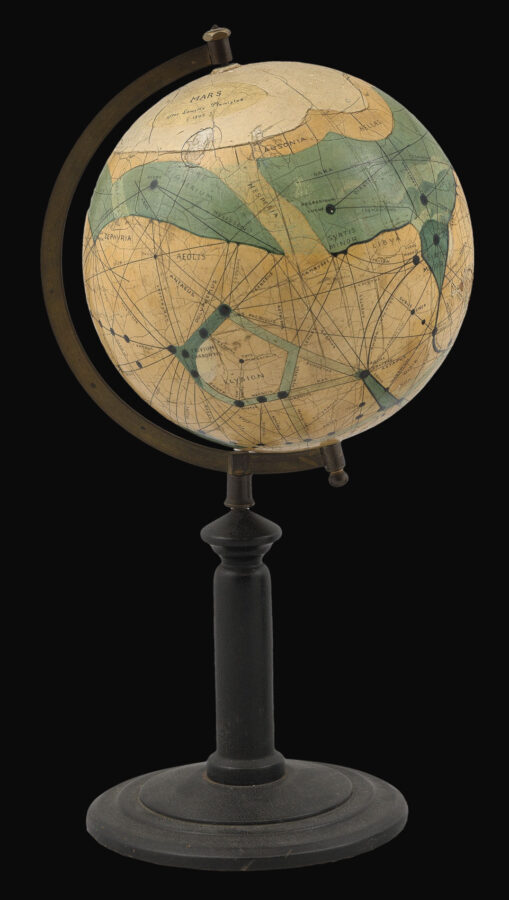 A rare and fascinating manuscript globe of Mars, suggestive of the possibility of Martian civilisation. This model is accompanied by two small handmade booklets, of particular interest because they contain contemporary pictures of the creation of Brun’s globes. The globe and booklets together suggest the social and political impact of contemporary scientific discoveries, and the politicisation of inquiries into space.

Biography
Emmy Ingeborg Brun (1872–1929) was a Danish writer, socialist and astronomer. She had no formal training — her father did not allow her to go to university — and spent long periods of her life bedridden, but was fascinated by the theories of contemporary astronomers Percival Lowell and Giovanni Schiaparelli, and the political scientist Henry George.

Mars in the Twentieth Century
Improving contemporary scientific observation of Mars was accompanied by a corresponding interest in socio-political thought in the planet as a potential site for socialism or communism. This took the form of fiction, like Alexander Bogdanov’s 1908 novel ​‘Red Star’, and was also addressed in scientific theories. In 1855 Schiaparelli observed a network of dark lines on the Martian surface. When he published his findings, along with the first detailed modern map of Mars, he named them ​“canali”, and suggested that they were built by a socialist regime, as a planet-wide system suggested a lack of national boundaries (Basalla).

Lowell popularised these theories by publishing three books on the subject, claiming these lines were indeed a canal network and raising the possibility of a Martian civilisation, although he opted for a ​“benevolent oligarchy” (Basalla). Brun was intrigued by these canals, which she saw as evidence of a different, more co-operative form of society. Mars was the potential site for a socialist utopia ‑0 and in particular, a potential field for an implementation of Henry George’s theories of a land-tax, as proposed in his 1879 work ​“Progress and Poverty”, in which he argued against a system of profit from renting land or property without contribution.

Geography
She adapted Lowell’s maps into manuscript globes, painting her interpretations on top of existing printed globes. After showing them to experts in the field, she donated them to various astronomical observatories and institutions. She sent one to Lowell himself in 1915, who replied warmly that it was ​“a capital piece of work”, although it was initially arraigned at customs because the officers thought it was a bomb. The globe uses Lowell’s territorial observations and Schiaperelli’s nomenclature for the features, most of which is no longer used.

The booklets
The first booklet contains a manuscript label on the inside cover, reading ​“Generala Globo di la Planeto Marso/​facita segun la yarala globi da Percival Lowell, de 1894 til 1914”; an inscription at the lower edge reads ​“Ingeborg Brun disegno. 1918”. It contains seven photographs protected by tissue paper. Five of the photographs show two views of the globe side by side. The penultimate photo shows the completed globe mounted on a stand. The final photo, however, is the most interesting.

The photograph shows a terrestrial globe, with the landmasses shown in white. A canal network, represented by black lines, is drawn over Europe and the Middle East and labeled ​“Kaiser Wilhelm’s Kanal”. The captions on the photograph itself read ​“Willy’s Dream/​will you better fulfill – Allies!” and ​“Free Land… Free Trade… Free Men”. The caption underneath the photograph reads ​“The Raw Product”.

Some of these canals are real, and some are imaginary. The Suez Canal links the Mediterranean and the Red Sea, and the Volga Don canal connects the Caspian and Black Seas. The canal between the Caspian and the Persian Gulf, however, did not exist. A project to connect the two had indeed been developed by Russian engineers in 1889, but was resisted by the other European powers, and was permanently put on hold by the First World War. Likewise, the canal stretching across eastern Europe and Asia, linking the Caspian Sea to the Sea of Japan and East China Sea, is a fictional expansion on the existing canal network in Russia.

The writer implies that Kaiser Wilhelm, the ruler of the German empire, would like to extend his reach. The Kaiser had a war hungry reputation in Europe, and was particularly unpopular in Denmark and Norway. Prussia, and later the German Empire, had gained Schleswig-Holstein from Denmark-Norway after the Second Schleswig War in 1864, and Wilhelm expanded on the existing Eider Canal between the Baltic and North Seas to create the Kiel Canal. The canal eliminated the need for German military vessels to sail around the Danish peninsula, and was part of Wilhelm’s wider drive to establish Germany as a dominant naval power.

An American journalist, Poultney Bigelow, published an essay in ​‘The Single Tax Review’ in 1912, claiming that Wilhelm had ​“read and pondered Henry George’s monumental ​‘Progress and Povert’“, and it is no small credit to him and to the administration of which he is the head, that the first practical application of Single Tax principles should have been made in the Province of Confucius when Germany organized Kiao-Chow in 1897”: he also called him, apparently without irony, ​“the greatest socialist on earth” (Bigelow). In the same issue, Dr Ludwig Wilhelm Schrameier, who was the German imperial commissioner in Jiaozhou, the German concession in China mentioned by Bigelow, described his implementation of a land-tax there.

It is certain that Sophus Berthelsen, to whom this globe belonged, would have been aware of Bigelow’s claim and Schrameier’s analysis. He was the co-founder and president of the Danish Henry George Society, and the editor of the Georgist journal ​‘Ret’. He is mentioned as a correspondent and colleague repeatedly by Joseph Dana Miller, the editor of ​‘The Single Tax Review’: in volume 10 of the journal Miller calls ​‘Ret’ ​“the most valuable organ for social questions in the Scandinavian region” and again encourages readers to subscribe in volume 16. Brun, who was similarly involved in Georgist activities in Denmark, would presumably have been aware as well.

The inscription and the globe in the photo therefore appear to be a joke between the creator(s) and receiver(s) of the booklet: possibly Brun and Berthelsen. It is possible that the globe in the photograph is the present example before it was painted over to produce the globe of Mars. The canal network is undoubtedly a reference to the Martian canals discussed in Percival Lowell’s works — it is drawn in the same style as his and Ingeborg Brun’s works. The fictional canals are also a reference to Germany’s colonial drive. The trans-Russian canal ends in the Yellow Sea, presumably meant to be Jiaozhou. It appears to imply sarcastically that ​“Willy’s Dream” is the same as Brun and Berthelsen’s — a socialist world, built around canals in the same way that their Martian utopia would be. ​“Free Land, Free Trade, Free Men” was a slogan of Henry George’s, and Brun had it engraved on the base of one of her globes.

The second booklet is smaller. The inscription to the inside cover is exactly the same as in the pasted label in the first booklet, without the date. There is an empty page that previously held a photograph. The caption reads ​“Den fardigl forarbejdede Vare”, or ​“The finished processed item”, presumably a similar photograph to the one of the completed globe in the first booklet. The second photograph is of the same globe painted with ​“Kaiser Wilhelm’s Kanal”.

Sophus Berthelsen (1864–1930), Danish lawyer and intellectual, and thence by descent. 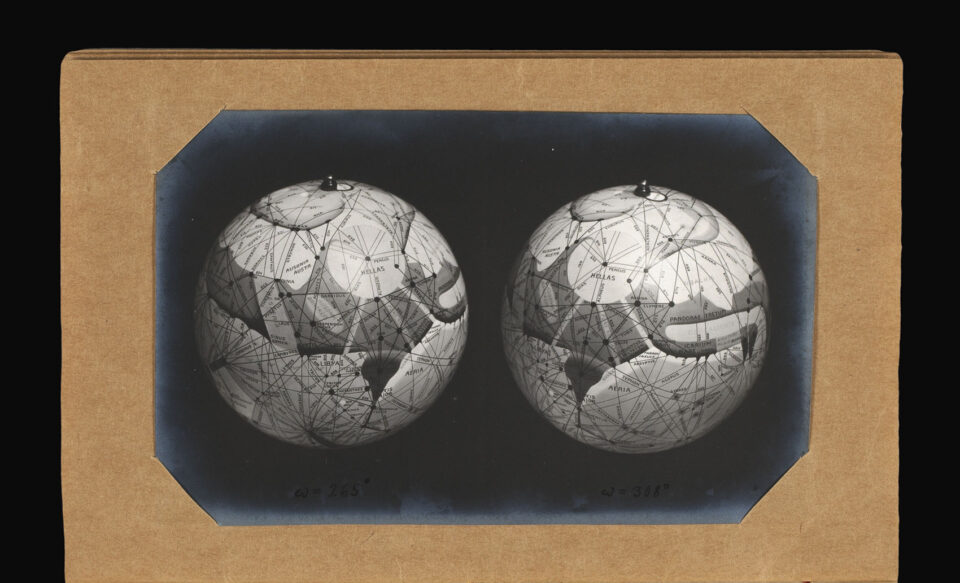 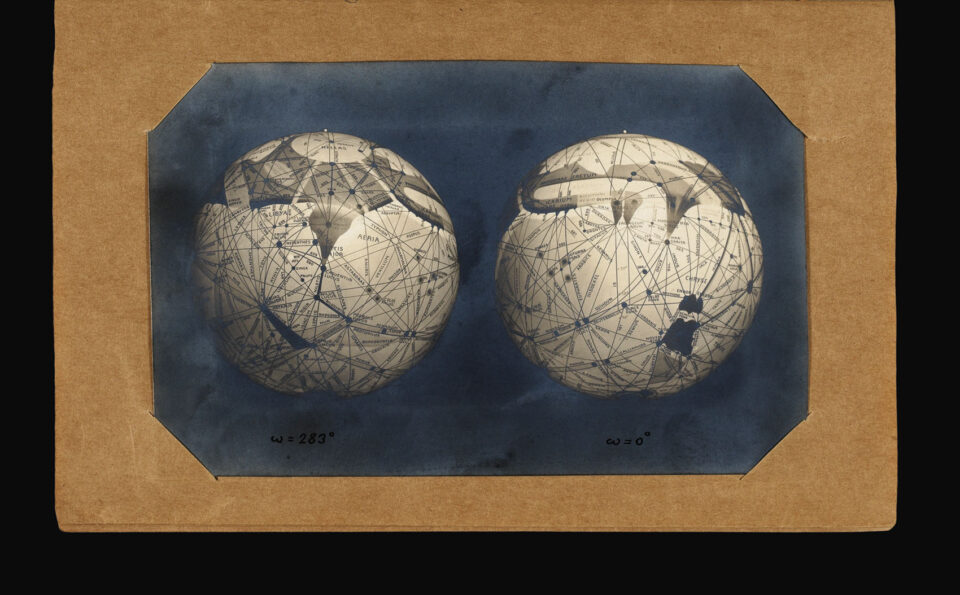 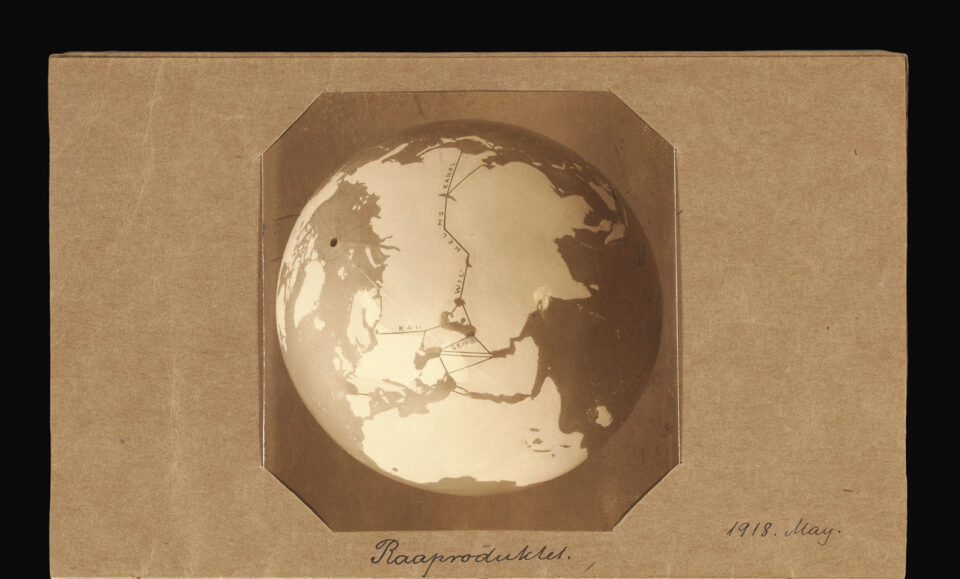 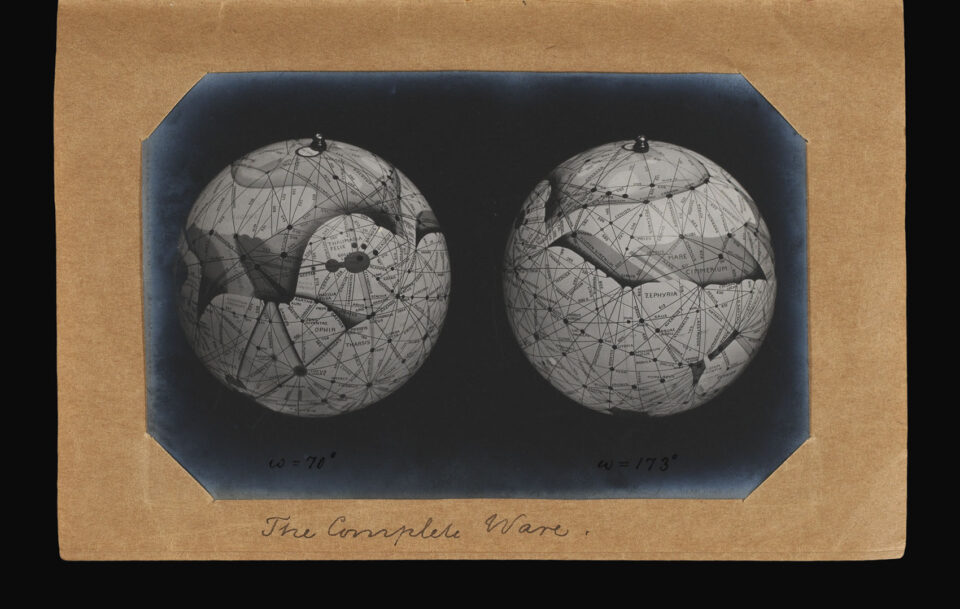 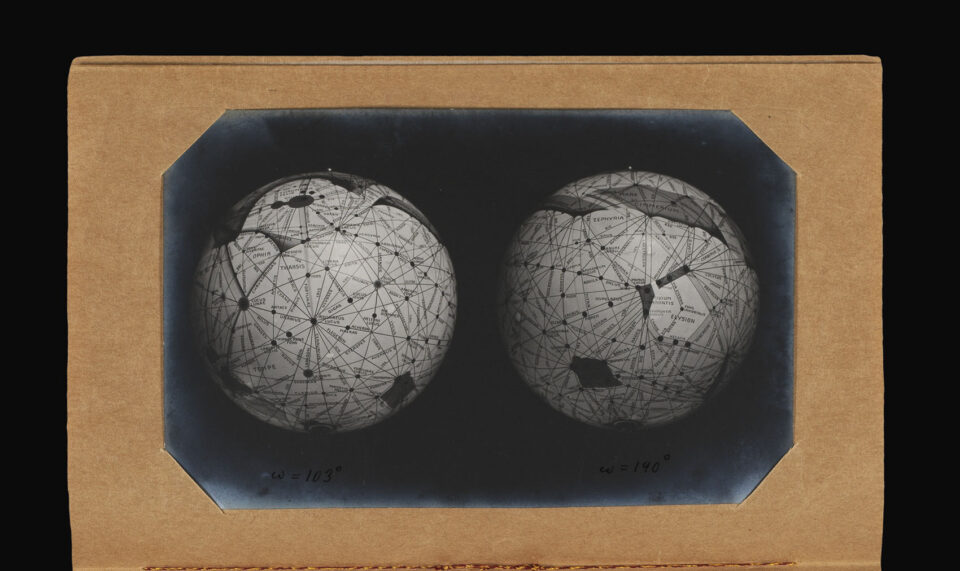 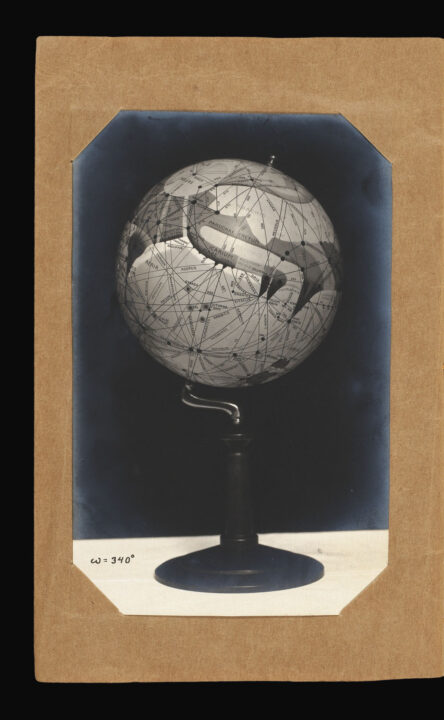 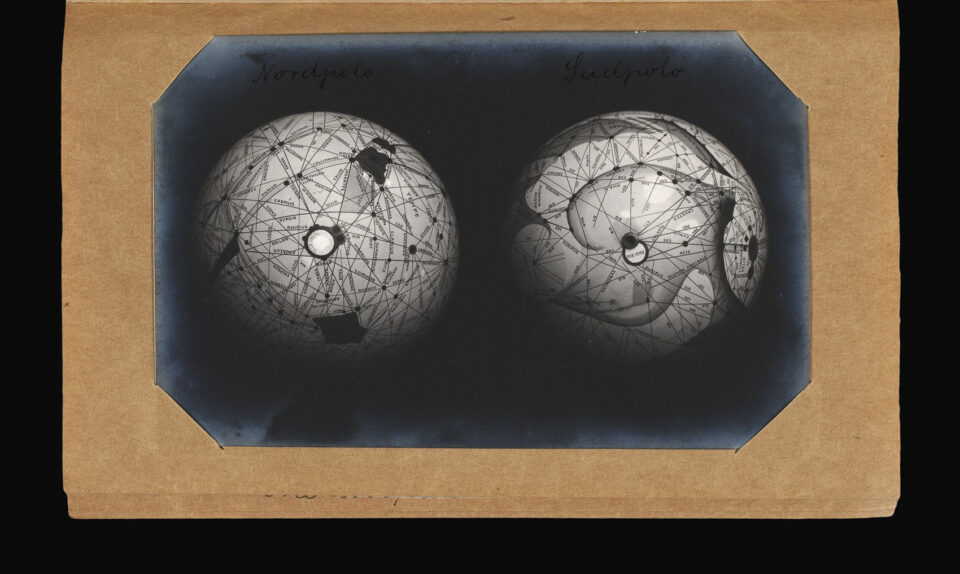 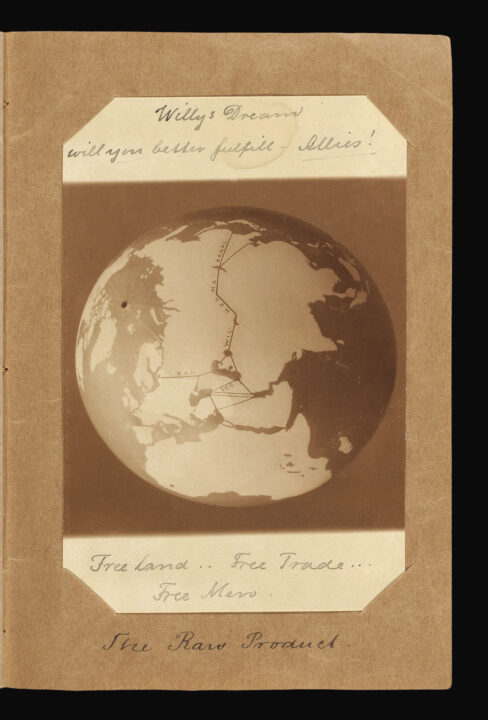 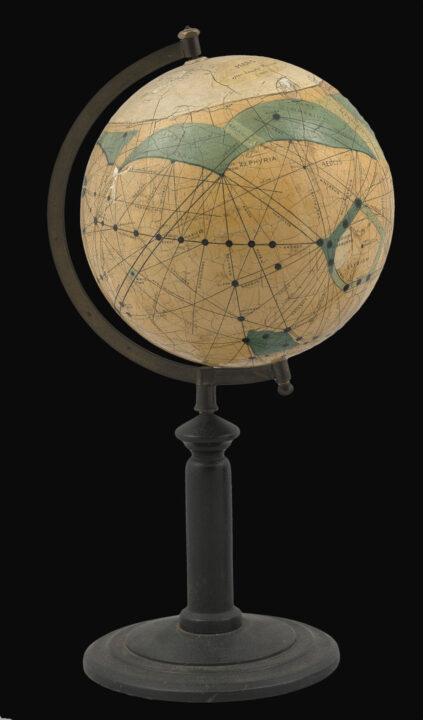 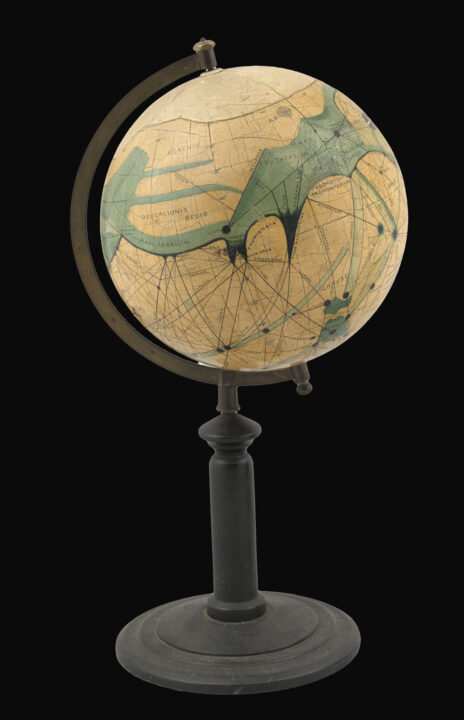 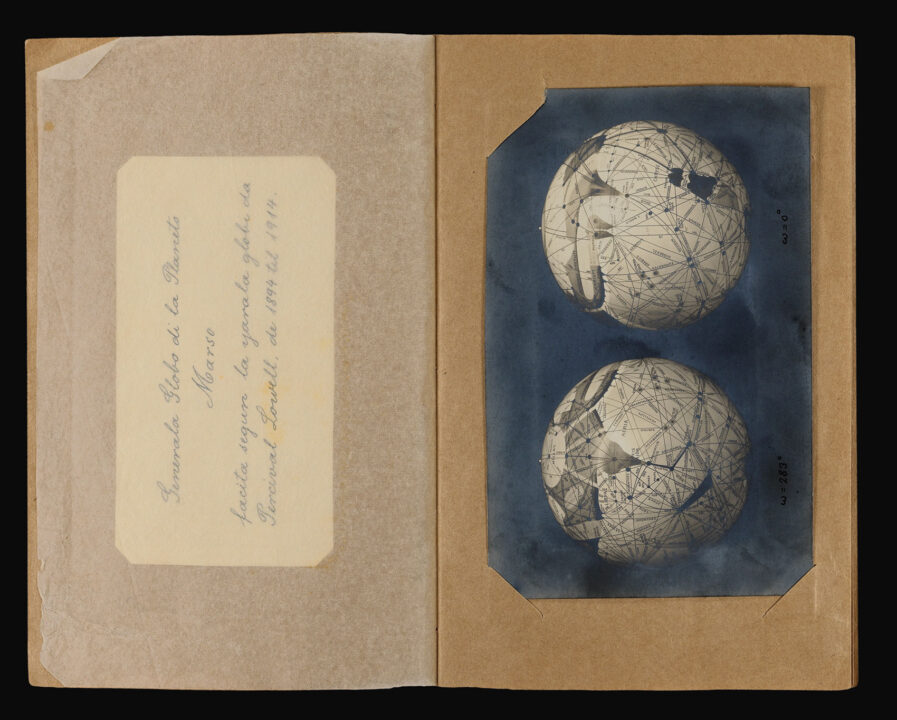 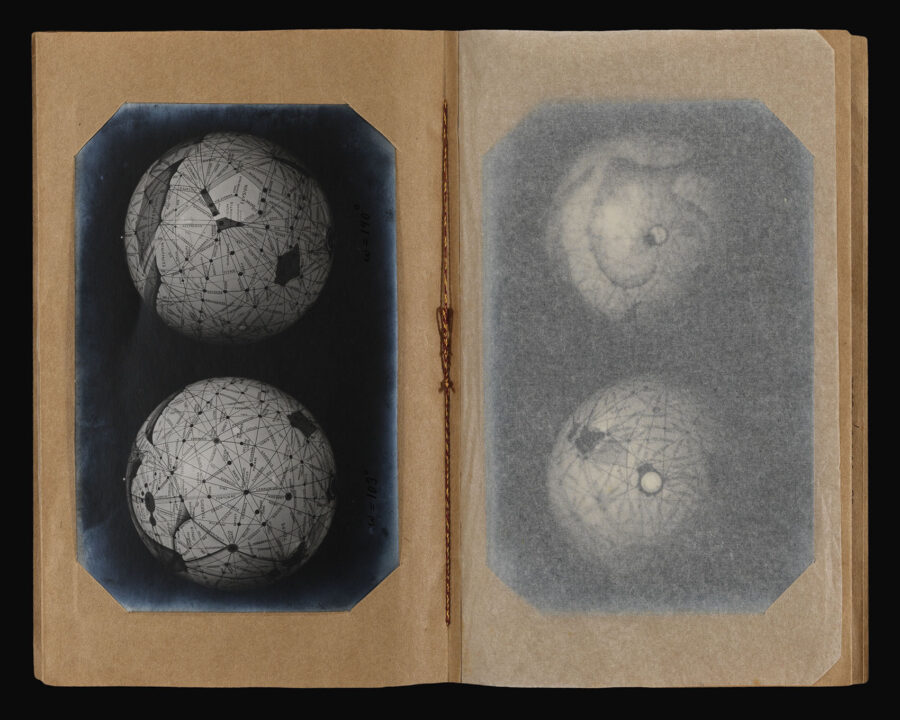 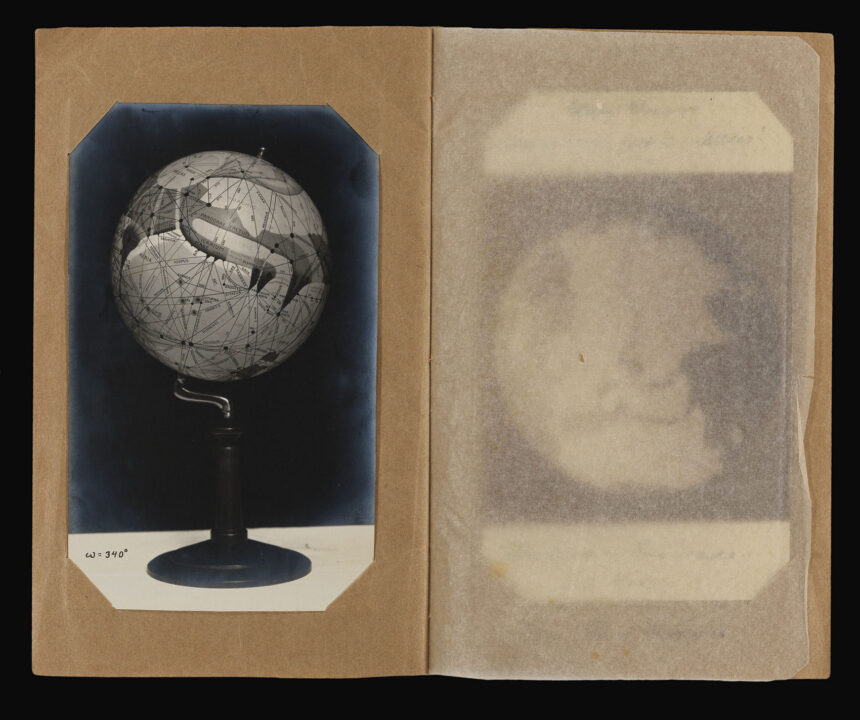