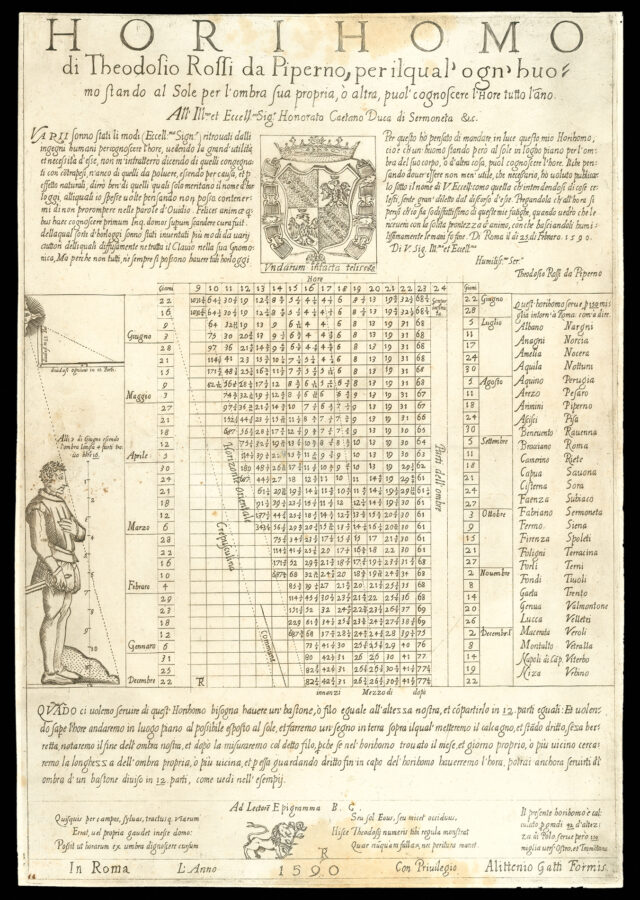 The man as sundial

Teodosio Rossi was born in Priverno and moved to Rome, where he studied mathematics and astronomy under the Jesuit astronomer Christopher Clavius; he was also known to have corresponded with Tycho Brahe. As well as contributing to works on jurisprudence, astronomy and geography, his most notable achievements lie in his work upon gnomonics; most notably in designing the ​“tetracycle sundial” for the Barberini family, one of the first works by the renowned architect Francesco Boromini.

However, the present work was the publication that established his name: the ​‘Horihomo’, literally ​‘man clock’. The work was in essence a portable clock, almost like a pocket watch for the traveller. The man himself is turned into the gnomon, as is illustrated to the left of the print. To the centre is a table of months of the year together with the declination of the sun, The work would appear to have been well received as it is mentioned in the ​‘Almanacco Perpetuo’ by Rutilio Benincasa published in 1593 as “..a work that is very useful and delightful and also beneficial and necessary to anyone and particularly to astronomers, physiognomers, physicians…”.

The work is dedicated to Onorato Gaetani (or Caetini), the Sixth Duke of Sermoneta, Knight of the Golden Fleece, General of the Papal Infantry and a distinguished naval commander in the wars against the Turks.