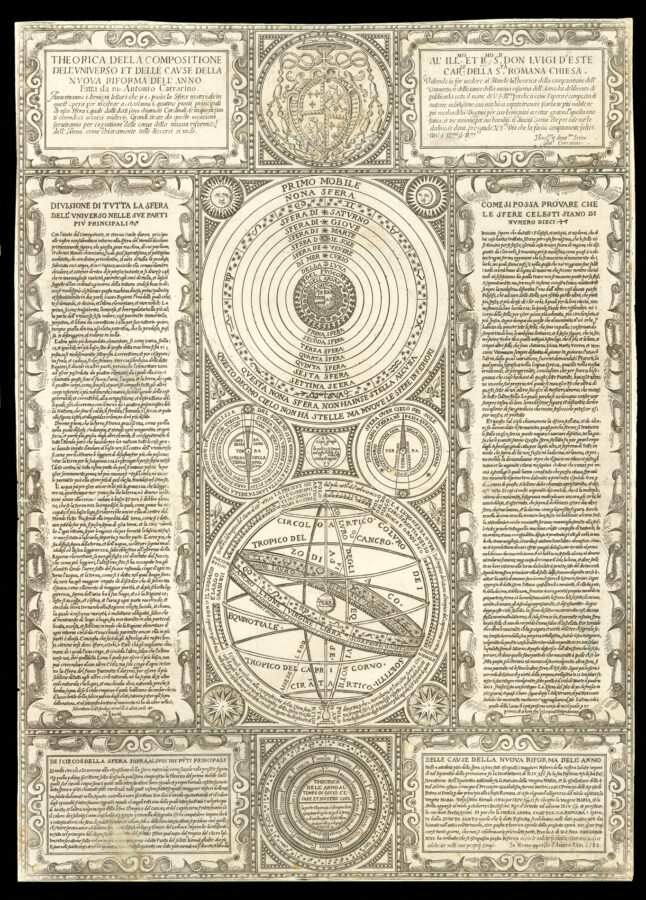 This extremely rare plate was published in the year 1582 ‒ the inception of the Gregorian Calendar.

The work is dedicated to Cardinal Luigi d’Este (1538–1586), a great patron of the arts and sciences, and gives a brief overview of contemporary cosmographical thought and the reasons for the adoption of the new calendar.

To the centre of the work is a depiction of a Ptolemaic universe ‒ the prevailing model of the universe at the time ‒ with the earth and the elements (water, air, and fire) at its centre, surrounded by ten spheres: the Moon, Mercury, Venus, the Sun, Mars, Jupiter, Saturn, the Stars, the universe, and the Prime Mover (i.e. god). Below are depictions of lunar and solar eclipses together with an Armillary sphere. Below this is a representation of the Julian and Gregorian calendar for the year 1582. to the left and right is a text on the veracity of the Ptolemaic model of the universe. to the lower right is a brief text on the reasons for the adoption of the new calendar, of which the overriding one was religious. The date for the celebration of Easter had, by the sixteenth century, shifted by some ten days from the original date as enshrined in the treaty of Nicaea (AD 325); the Catholic Church saw this drift as undesirable. to achieve the recalibration, the reform altered the calendar through two fundamental measures. The first consisted of the drastic and immediate shift of the date to the astronomical position, suddenly jumping ten calendar days; therefore in 1582, from Thursday 5th October there was a jump to Friday 16th October. The Pope’s second measure was to modify the leap years’ rule in order to avoid that the day would shift again in the future.

Antonio Carrarino (fl.1581–1615) was an Italian author and engraver from Orvieto. He appears to have moved to Rome in the early 1580s, where he produced several important scientific and medical works.

A crucial and extremely rare astronomical work, previously known only in one incomplete example in the British Museum that is missing a considerable part of the engraved surface.
/