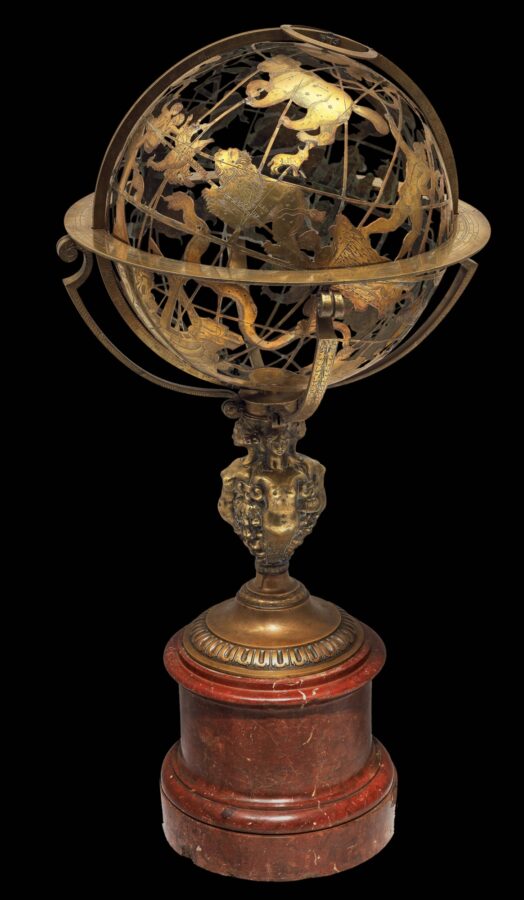 The culmination of Renaissance ingenuity and scientific achievement

[Celestial sphere with traces of a mechanism].

This magnificent celestial sphere belongs to a small and rare group of sixteenth century models with clockwork mechanisms illustrating Ptolemy’s theory of the nine spheres. It is the culmination of Renaissance ingenuity and scientific achievement. Of all extant models, the present sphere is by far the largest example and offers an imposing and impressive representation of the constellations and their stars.

This group of spheres is based on Ptolemy’s principle that the Earth is at the centre of the universe while the sun, moon, planets and stars all rotate around it. Ptolemy identified nine spheres representing the heavenly bodies of the Moon, Venus, Mercury, the Sun, Jupiter, Mars, Saturn and the eighth sphere of the stars. The ninth sphere is stationary and supports the other spheres while Atlas holds the entirety on his shoulders.
This model represents the eighth sphere — the stars and constellations. The 48 Ptolemaic constellations depicted on this sphere reflect the groupings identified in antiquity based on the stars visible at the time, approximately a thousand in total. The design in fretwork offers the opportunity to glimpse the constellations and stars from the inside of the sphere as they would have been seen in the sky from Earth.

Mechanics
The tradition of mechanical spheres, or clockwork globes, dates back to the 3rd century BCE with Archimedes credited for making a celestial sphere with planetary motions that rotated on geared wheels. Cicero later wrote that this device was brought back to Rome by Marcus Claudius Marcellus after he conquered Syracuse in 212 BCE. Claudian wrote a poem in circa 400 CE championing Archimedes’ incredible feat,
When in a glass’s narrow sphere confined,
Jove saw the fabric of the Almighty mind,
He smiled, and said, ​‘Can mortal’s art alone
Our heavenly labour mimic with their own?
The Syracusan’s brittle work contains
The eternal law, that through all nature reigns.
Framed by his art, see stars unnumbered burn,
And, in their courses, rolling orbs return:
His Sun, through various signs describes the year,
And, every month, his mimi Moons appear.
Our rival’s laws his little planets bind,
And rule their motions by a human mind.
Salmoneus could our thunder imitate,
But Archimedes can a world create.
Translation by James Ferguson, 5 February 1766

Renaissance artisans combined the latest developments in clock- making and scientific instruments with the revived interest in astronomy from antiquity to create elaborate mechanical spheres, building on the tradition developed by Archimedes and his contemporaries. John Leopold, former curator of horology at the British Museum, identified four groups of these movable spheres, and this particular sphere belongs to the second group, which is regarded as the ​“first generation” of French mechanical spheres. These models first appeared around 1530 in Blois and Lyon with a stationary central terrestrial globe fixed with a mechanism that allows the outer celestial sphere to rotate around it. Although it is now lost, the present model would have originally featured a terrestrial sphere, the Earth, and an associated mechanism for the celestial sphere to rotate around it.

Biographies
The original maker associated with these spheres is Julien Coudray of Blois, who made examples for both Louis XII and François I. The inventory of the Château de Blois of 1544 includes ​“une théoretique des plantes à neu fronds mobiles où se trouvent sept roux d’azain, étabile à mouvements”. In Coudray’s wake three makers began to produce these mechanical spheres: Jacques de la Garde (active in Blois, c1540-1580), Pierre de Fobis (active in Lyon, c1540-1575), and Jean Naze (active in Lyon c1540-1581). These spheres typically featured mechanisms that allowed the celestial sphere to rotate around the Earth, completing a rotation in 24 hours. Some examples featured a bell on the terrestrial sphere that would ring on the hour.

Jacques de La Garde was one of the most important French watchmakers of the Renaissance, operating from his workshop in the Puy du Quartier in Blois between 1540 and about 1580. He received the title ​“King’s Orlogeur” in c1578. He was the first of a long dynasty because three of his sons, Antoine, John and Abraham, became watchmakers.

Pierre de Fobis was one of the most famous French watchmakers of his time. Also called Fobys or ​“maître Pierre, orlogier[sic]” in archival documents, he was born in Provence around 1507. He probably began his career in Aix-en-Provence, an important watchmaking town, before settling in Lyon around 1535. Lyon was an important intellectual centre and a prosperous city, and it was strategically situated on the road that connects the countries of the North and Italy and therefore attracted craftsmen of all kinds, including watchmakers.

Jean Naze apprenticed in Creil before settling in Lyon in 1554. One of Naze’s signed astrolabes is in the collection of the Musée des Beaux-Arts in Lyon.

There are only a few surviving examples, which include:
1. A mechanical sphere formerly in the Palais Rothschild in Vienna, now in a private collection, made by Pierre de Fobis in Lyon c1540-1550. 2. A complete sphere, signed: ​“J Naze A Lion D L Cordeliers” in the collection of the Hessisches Landesmuseum in Kassel.
3. An incomplete sphere, signed and dated ​“J de La Garde Bloys 1551” at the British Museum (ZAA0070).
4. The present example.
Of the surviving examples, the present model is the largest of its kind. It is possible this model would have originally been supported on a stand of three columns, as seen on the Rothschild and British Museum examples.
This sphere shows traces of a mechanism that would have originally connected to a terrestrial sphere. Two raised rims remain on the model that would have held the main wheel in its place at the South Celestial Pole. Additional traces for holes are also visible which would have supported the axis of the geared wheels.

Astronomy
Albrecht Durer engraved the first printed celestial map in 1515. Prior to his publication, only manuscript star-charts were available, often copied by monastic scribes. The Vienna Manuscript, dating to c1440, was one of the first complete western star maps and is housed in the collection of the Österreichische Nationalbibliothek, Vienna. The source for the Vienna Manuscript is unknown, but scholars have linked it with the work of the astronomer Johannes von Gmunden (c1384–1442), who taught at the University of Vienna, lecturing on the ​‘Sphaera Materialis’. This map was highly influential and served as a pattern for most of the succeeding star maps in Europe, and Dürer’s map is linked to the Vienna Manuscript.

In addition to influencing Dürer’s printed map, the Vienna Manuscript also served as a source for a finely engraved metal celestial globe made in 1480 by Hans Dorn for Martin Bylica, and now in the collection of the Jagelonian University in Krakow.

The current model also reflects the latest developments in celestial mapping with details drawn from the 1537 Frisius-Mercator Globe made in Louvain (National Maritime Museum, Greenwich) given its related iconography of the 48 Ptolematic constellations. This 1537 source introduced a number of new features not seen in Dürer’s map, including the transformation of Eridanus, a river god, into a figure of a naked swimming maiden, which was introduced in an early edition of Hyginus’ ​‘Fabulae’ from the 1530s. The representations of Virgo, Leo and Hercules relate more closely to the 1537 model in profile and contour. Frisius was also responsible for introducing planetary symbols on the Ptolemaic constellations, which he included on his 1537 globe and also appear on the present model.

The sphere also includes figures of the Ship in the southern hemisphere, either Navis or Argonaus, the shape of a Whale, Cetus and an updated depiction of Orion, who rests with his knees on the Rabbit (Lepus). François Demongenet published a series of gores around 1560 that became a leading source for the decades to come and correspond closely to these three depictions. However, the present model pre-dates Demongenet’s publication, suggesting that Demongenet was incorporating earlier, unattributed sources into his designs.