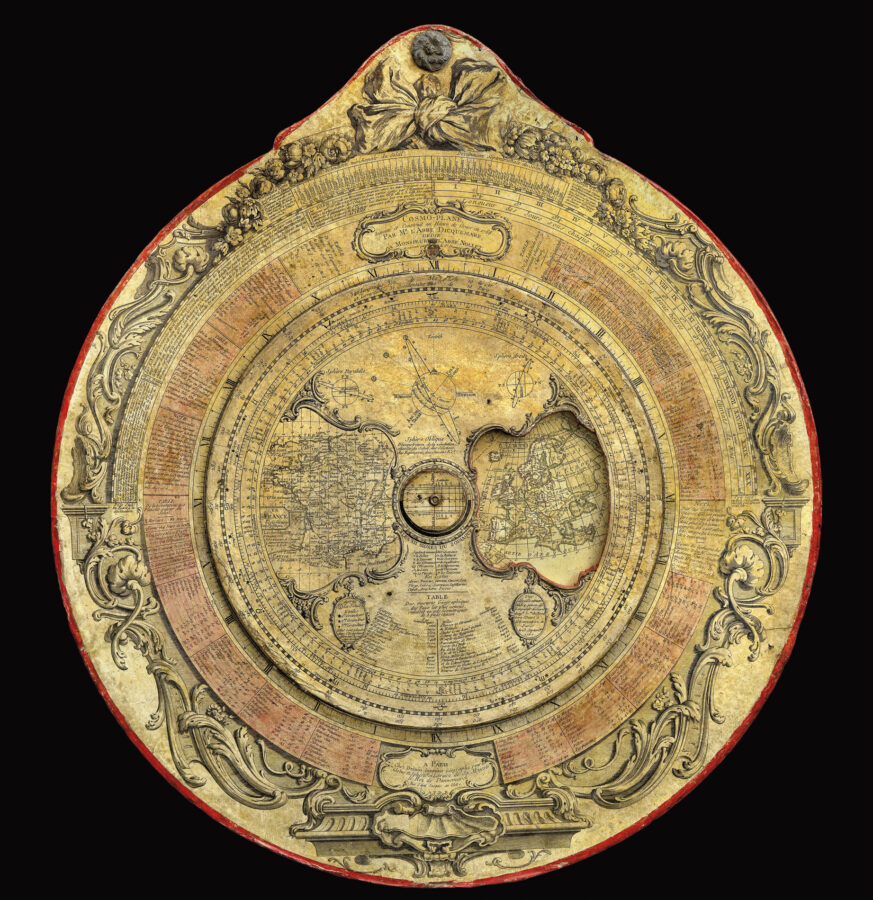 A rare instrument intended to aid astronomical navigation at sea.
The instrument is a giant wall-mounted volvelle, consisting of three concentric discs, each one engraved and mounted on board.

To the centre of the instrument is a small diagram of the earth with the lines of the zodiac on the ecliptic ‒ including the tropics of Capricorn and Cancer; the equator, Arctic and Antarctic circles; and the degrees of longitude and latitude. The next disc contains three diagrams of the earth: the ​“Sphère oblique”, the ​“Sphère Paralelle”, and the ​“Sphère droite”. The spheres are said to demonstrate ​“the annual revolution of the sun, the solstices, the equinoxes, the seasons, etc.”. Below are a list of the twelve signs of the zodiac, in French and Latin; a table of the standard unit of measurement in different countries; a key to the magnitude of the stars; and information concerning magnetic declination at the Paris observatory on the 3 September 1767. to the left and right are two cartouches: to the left is an ecclesiastical and political map of France; to the right is a cut-out that, when the disc is revolved, reveals maps of the four continents (Europe, Africa, Asia and America). Several scale bars are engraved on the circumference to denote longitude based upon two prime meridians: the first at the ​“Isle de Fer” (Canary Islands) and the second at Paris. The next line denotes signs of the zodiac, together with the calendar; prominent stars through the year; and degrees of a circle. In this scale, the vernal equinox has been aligned with the prime meridian of the ​“Isle de Fer”. The next scale shows the altitude of the sun throughout the year, with the last scale showing lines of latitude. Surrounding this are numerous tables providing information on the prime meridians; the revolution of the planets; prominent places with their latitude and longitude; comets; signs of the zodiac; a table of latitude and the change in climate; table of the declination of the stars upon the instrument; discussion of the frigid, temperate and torrid zones; declination of the sun in the northern and southern hemispheres; the seasons; and length of the days in each climate zone.

Father Jacques-François Dicquemare (1733–1789) was an astronomer and naturalist who lectured in natural science and natural history at the university in Havre. He is best known, with Nollet, as a populariser of science in his book ​‘La connoissance de l’astronomie, rendue aisée & mise à la portée de tout le monde, 1769’ and as the author of the ​‘cosmo-plane’, the present work, which was intended, among other things, to solve the problems of nautical astronomical navigation.

The work is dedicated to Jean-Antoine Nollet (19 November 1700–25 April 1770) a French clergyman and physicist, who was one of the great popularisers of science in the eighteenth century. Nollet was particularly interested in the new science of electricity, which he explored with the help of Du Fay and Réaumur. he joined the Royal Society of London in 1734 and later became the first professor of experimental physics at the university of Paris.

We are only able to trace one institutional example of the instrument; that held by the Stewart Museum, Montreal.
/