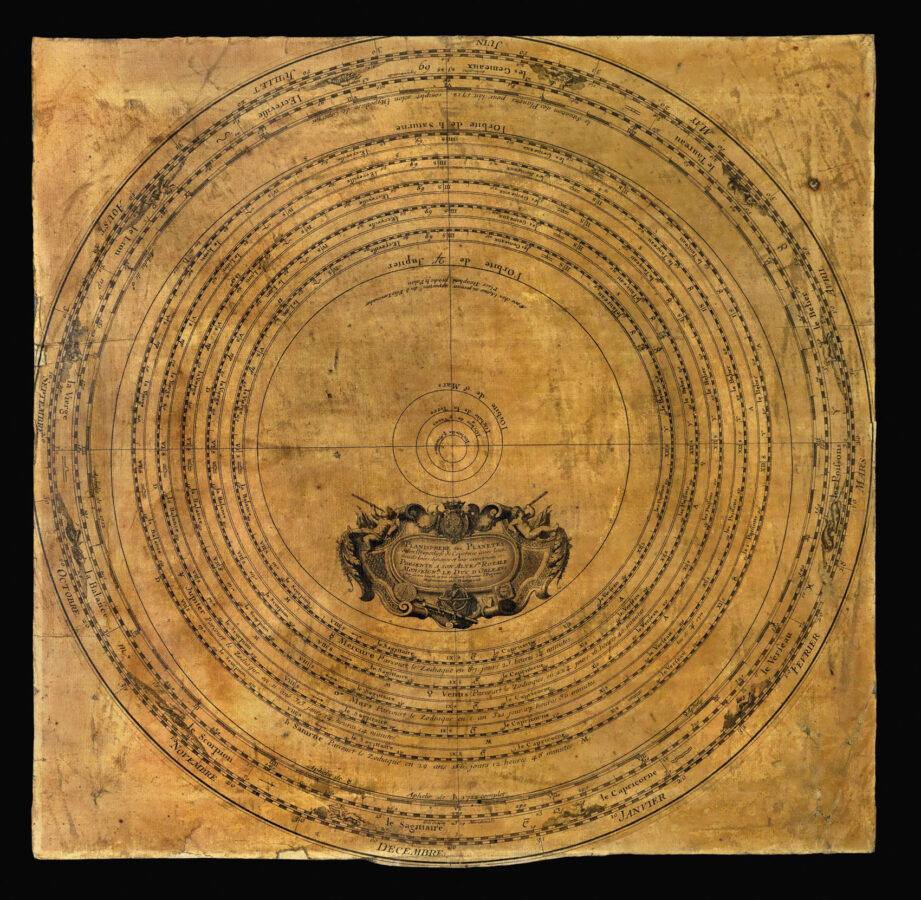 Jean Pigeon d’Osangi (1654–1739) was one of the leading scientific instrument makers in Paris during the early eighteenth century. he is known to have made instruments for Louis XIV, and dedicated this planisphere to Philip II, the Duke of Orleans (1674–1723), two years before he became Prince Regent. Pigeon was not only a celebrated master instrument-maker but also a versatile artist, whose life was written up in detail by his daughter, Marie-Anne-Victoire Le Guay in her biography of him, ​‘Le méchaniste philosophe’ (1750). In the early eighteenth century Pigeon became famous as the inventor of the rotating armillary sphere operated by an integrated clockwork movement. his renown grew with the publication in 1714 of his treatise ​‘Description d’une sphère mouvante’. Pigeon had made his first rotating armillary sphere in 1706 for Louis XIV; he would dedicate his second armillary sphere to the Duke of Orleans in 1714.

The present instrument is dated 1713, and also dedicated to the Duke of Orleans. The title and dedication are surrounded by an elaborate cartouche featuring the coats-of-arms of the Duke of Orleans, several scientific instruments including an armillary sphere, a quadrant, a telescope, a pair of compasses, and two putti surveying the heavens through telescopes. As the title suggests, the instrument depicts a heliocentric universe in accordance with Copernicus. At the centre is the sun with each planet’s orbit delineated, from Mercury to Saturn, together with its title and planetary symbol. Between the orbits of Jupiter and Saturn are placed the signs of the zodiac, together with the orbital period for each planet through the zodiac and their aphelion (i.e. the point in their orbit where they are furthest from the sun). There are also letters placed upon each orbital path: ​‘S’, ​‘M’, ​‘D’, and ​‘A’; ​‘A’ & ​‘D’ mark the point of the planet’s ascension and declination, with ​‘S’ and ​‘M’ marking planetary nodes.

Rare. We are only able to trace one institutional example of the work, that in the Bibliotheque Nationale de France (FRBnF42097471).
/