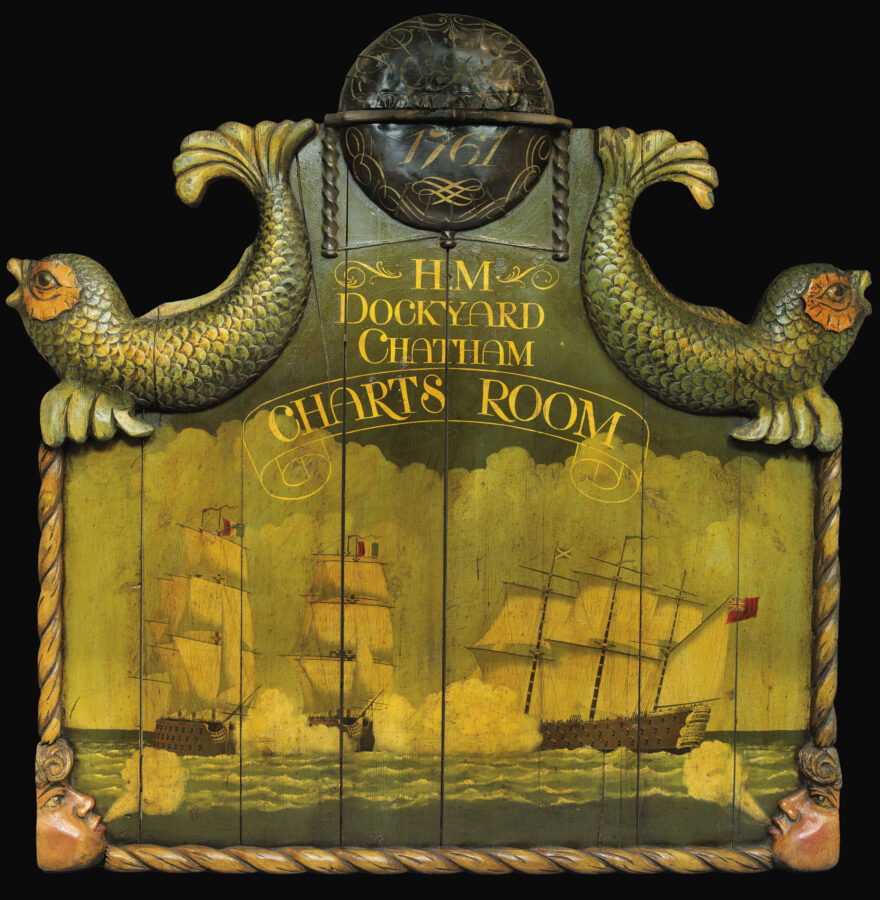 The Charts Room at Chatham Dockyard

A sign presumably intended to fit above the doorway for the Charts Room at Chatham Dockyard in Kent. Decorated with a dramatic sea-battle between French and British warships; at the top is a globe, dedicated to George II (1683–1760), and dated 1761, flanked by dolphins. The borders of the sign, with a windhead at each lower corner, are carved to look like rope — the dockyard ropery was a centre of rope-making from 1618 — each ship needing approximately 30 miles of rope, 20 of which were used to rig the sails.

Chatham was the single-most important dockyard in Britain, established in 1547 when the Royal Navy rented two storehouses on ​‘Jyllingham Water’, on the River Medway, at Sunne Hard. By 1570 full dockyard facilities were concentrated below Chatham Church. The first ship, the Merlin, slipped the docks in 1579, followed by Queen Elizabeth I’s warship the Sunne, in 1586. In 1618 the dockyard moved downstream to its current location, well placed to support the Royal Navy through a series of trade wars with the Dutch that were mostly fought in the English Channel and North Sea.

Many famous ships were built at Chatham before it closed for good in 1984, including the HMS Victory, Horatio Nelson’s flagship.

From the collection of Roland de la Poype (1920–2012), a Second World War fighter ace and member of the Normandie-Niemen squadron serving on the Soviet front.