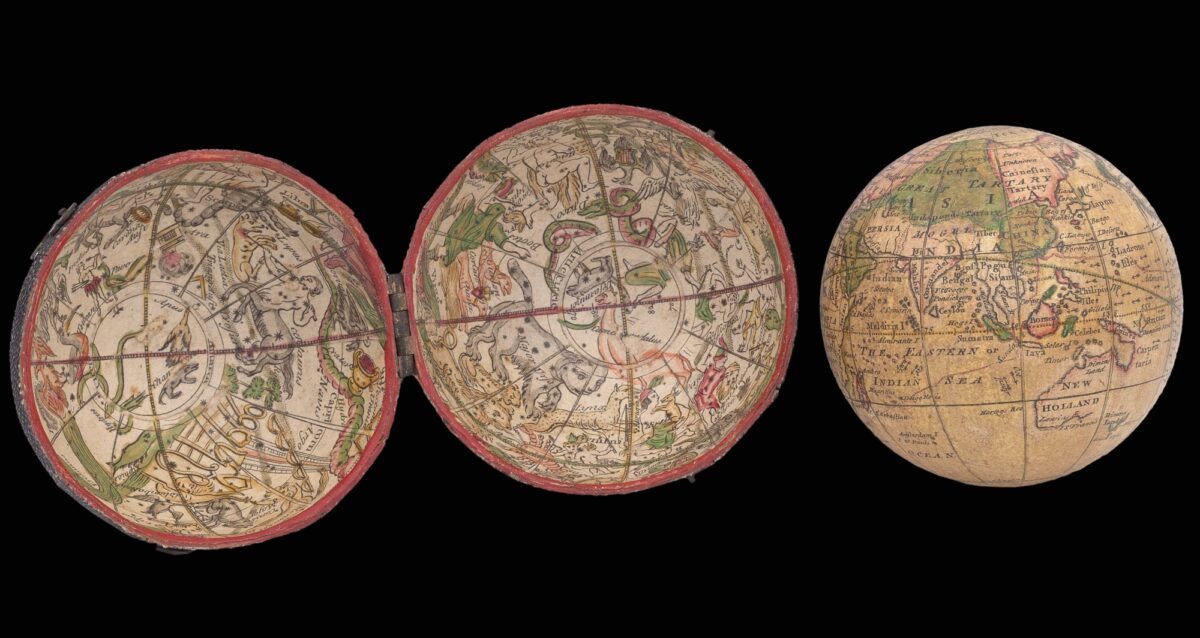 Showing the results of Bering’s expedition to the Kamchatka Peninsula

Biography
Nathaniel Hill (fl1746-1768) was a surveyor, mathematician and instrument maker based in London. He started his career as an apprentice globemaker to Richard Cushee, and he later took on Cushee’s nephew, Leonard, as his apprentice. His shop was at the Globe and the Sun in Chancery Lane, and his trade card advertised ​“New and Correct Globes of 3, 9, 12 and 15 inches”. Hill’s most popular items were the three and nine-inch globes, which he published either as pocket globes, mounted on a stand or for orreries. After Hill’s death, his business was continued by Thomas Bateman, who took on John Newton and William Palmer as apprentices.

Geography
This pocket globe by Hill shows the rapid changes in European knowledge of the world. Although it bears the same date as another globe he published in 1754, it shows some significant revisions, the most obvious of which is the addition of trade winds. In Asia, the Caspian Sea has been reduced in width to reflect the findings of the Russian nautical surveyor, Feodor Soimonov, who thoroughly surveyed the sea for the first time between 1719 and 1727, and published his findings in 1731. The most significant development is the redrawing of eastern Russia, influenced by Vitus Bering’s second expedition to the Kamchatka Peninsula. Bering spent ten years (1733–1743) exploring along northern Russia, mapping the Arctic coast of Siberia, and reaching Alaska in North America. Bering died of scurvy during the voyage, and an island off the Kamchatka Peninsula was eventually named in his honour. Stephan Krasheninnikov published the first detailed description of the peninsula, ​‘An Account of the Land of Kamchatka’ in 1755, which is possibly where Hill acquired the new information.

Astronomy
The celestial gores, lining the case, are geocentric in orientation and, in a departure from most previous pocket globes, are concave, thus depicting the constellations as seen from earth. Previous pocket globes, most notably John Senex’s pocket globe of 1730, simply used gores intended for celestial globes, thus rendering the night sky in reverse when pasted to the inside of the case. The difference is most noticeable in the orientation of Ursa Major, with the bear facing in the other direction.