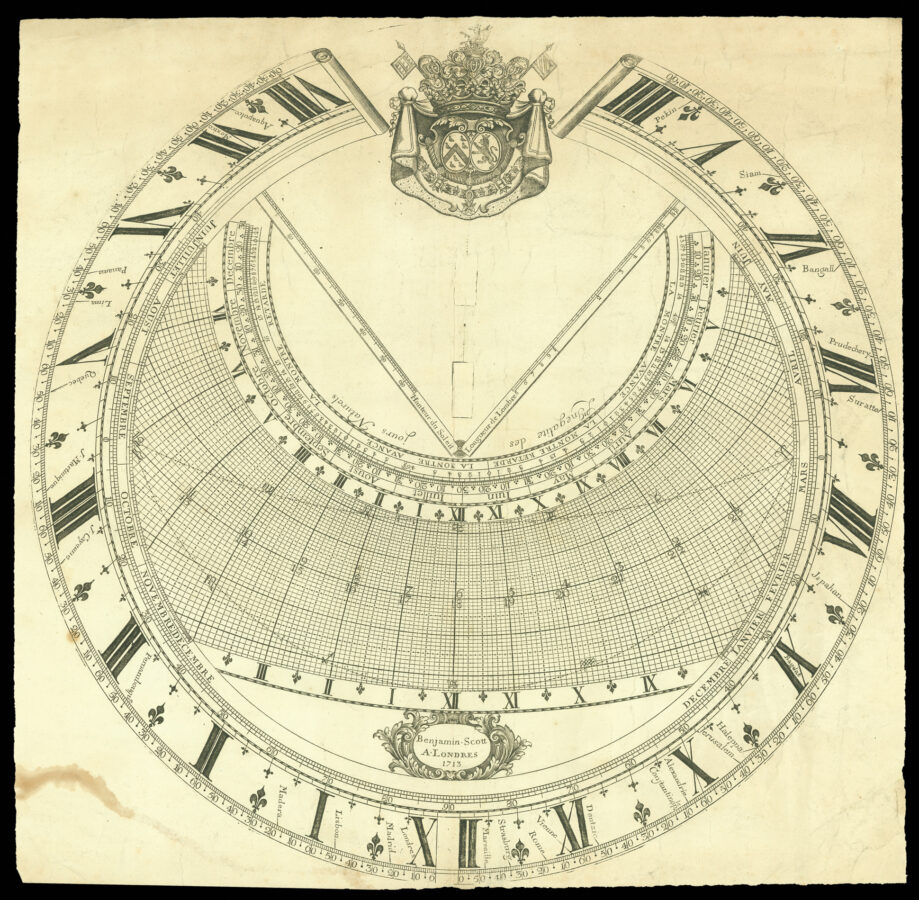 Benjamin Scott (ca. 1688–1752) was an English globe and instrument-maker. Scott was apprenticed to James Anderton on 14th April, 1702, turned over to the instrument-maker James Rowley (of the Broderers’ Company) on 2nd April, 1706, and made free in the Grocer’s Company on 16th September, 1712. He established his own business about this time, taking on his first apprentice, Thomas Heath, in turn a distinguished instrument-maker, in 1712.

His business may not have been greatly successful, as between 1714 and 1718 he worked in partnership with map and globe-maker Charles Price sr., offering ​“globes of 16, 12, 9 and 3 inches diameter, according to the newest celestial observations, with the best maps, sea-charts and prints, and all sorts of mathematical instruments for sea and land, in silver brass, ivory and wood, made to the greatest perfection”. This partnership also seems to have been unsuccessful. In 1733 he settled in St. Petersburg, and remained there the rest of his life.He initially found employment as a compass-maker to the Naval Ministry, and appointed scientific instrument-maker to the St. Petersburg Academy of Sciences on 21st December 1747.

The earliest recorded extant instrument made by Scott was a brass double horizontal dial, commissioned by a French client. It was lettered entirely in French and aligned for a French (Parisian) user. It was made on the Gregorian Calendar then in use in France, but not adapted in England until 1752. The dial is preserved today in the Musée des Arts et Métiers, Paris, while the accompanying instruction book, ​‘A Description, and some of the uses of the double horizontal dial’, is in the British Library’s Sloane Collection (Department of Manuscripts, Sloane MS 2040). Although in English, the instructions relate exactly to the Paris dial so that ​“We can say with near certainty that the book was produced to accompany Scott’s ​‘French Dial’ …” (Davis and Lowne, p. 16).

Clearly Scott was proud of this brass dial, created towards the start of his independent career: indeed, so proud that he commissioned this engraved copy of it, presumably designed as a promotional broadside to show prospective clients the quality of his work.

The print is rather more elaborate than the dial. Scott has enhanced the decorative elements: the floral frame round his imprint is shaded, while the coat of arms on the print, presumably his client’s are not to be found on the dial proper. In the scientific data, however, the two are identical.

The print is rare; it is not mentioned by Davis and Lowne and no other example has been located.