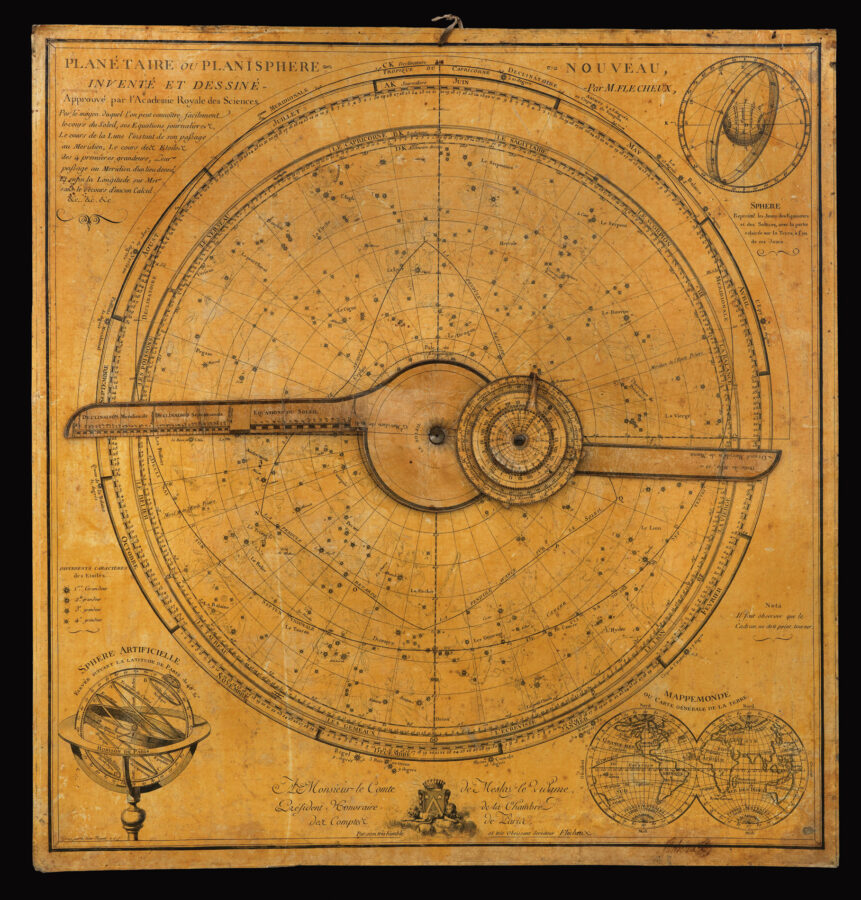 A rare planisphere with moveable parts.

​“Flecheux’s map is intended to show the path of the sun, the daily equation of time, the path of the moon, the time of the lunar meridian passage, the places of the stars of magnitude 1–4 identified by Bayer numbers, their transits for a certain place, and the longitude at sea without recourse to further calculation. Accordingly, the coordinates are numerous: lines every 10 degrees r.a., the equinoctial and solstitial colures graduated every degree; dotted lines every 30 degrees longitude between ecliptic pole and ecliptic and over southern half of ecliptic, and dotted lines every 10 degrees longitude between equator and ecliptic over the northern half; meridian of the pole star; Arctic and orbit of the earth; tropic of Cancer: circles every 10 degrees declination; ecliptic; equator graduated every 1 degree r.a. and every 1 degree longitude; circumference graduated every day. Finally there are lines indicating the days on which, and the extent to which, the mean-time clock is ahead of or behind the true sun” (Warner).

To the border of the work is a map of the world, an armillary sphere elevated to the latitude of Paris, a key to the magnitude of the stars upon the planisphere, and a diagram showing the equinoxes and the solstices.

The work is dedicated to Jérôme-Pélagie Masson de Meslay (1742–1798), the head of the Chambre des Comptes, the powerful courts which dealt with financial affairs, overseeing public spending and auditing the accounts of crown officials.

Flecheux (1738–1793) was an astronomer about whom little is known. We are only able to trace a handful of his works: the present planisphere (1778); a loxocosme (1784) for determining, among other things, the annual and diurnal movements of the earth; a map of the world (1782); and a table of planets passing the meridian (1789). his passing was mentioned by Jérôme Lalande in the ​‘history of Astronomy’ (1794), who states he was ​“author of an ingenious planisphere”.

Rare. We are only able to trace four institutional examples: those of the Adler Planetarium; Stanford university Library; Erfurt university; and the BNF.
/