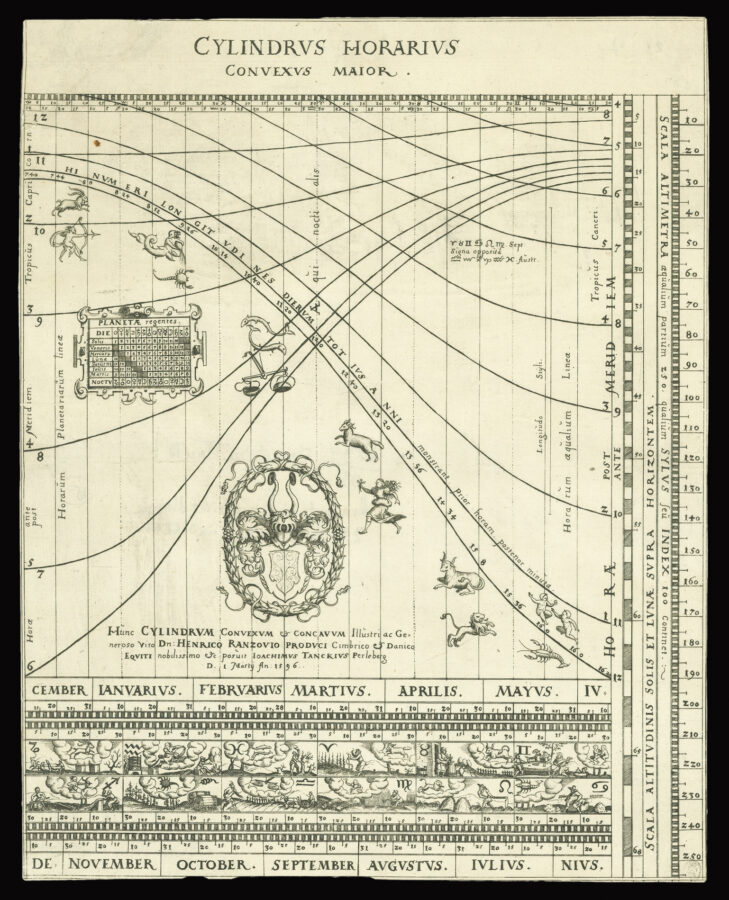 A rare sheet for a pillar sundial.
A pillar, or shepherd’s, sundial indicates time from the sun’s altitude, which is also dependent on the latitude and the season of the year. The present sheet was made for the latitude 53 degrees (the latitude for the German town of Perleberg). Once mounted on to a cylinder or pillar, the dial must be set to the correct date by rotating a knob on the top so that the metal gnomon lies immediately above the symbol for the appropriate month, which is marked along the bottom of the column. to use the sundial, it is positioned so that the shadow of the gnomon falls vertically down the column. The time will then be indicated by the position of the tip of the shadow relative to the curved hour lines that are marked on the column.

Tranck dedicates the instrument to Heinrich Rantzau or Ranzow (Ranzovius) (1526–1598) who was a German humanist writer and statesman, a prolific astronomical author and an associate of Tycho Brahe. He was governor of the Danish royal share in the Duchy of Holstein, a wealthy man and celebrated book collector. Rantzau is perhaps best remembered as a patron of scholars. His own ​‘Tractatus astrologicus de genethliacorum thematum’ appeared in 1597, and went through five editions by 1615. In his time, he was regarded as a generous supporter of artists and writers in Lübeck, many of whom he engaged to write memorials of his father.

We are only able to trace one institutional example: that held by the Musée de Chateau de Pau (P1279). An example is mentioned in ​‘Catalogue de vente d’une belle collection d’estampes colligée par Benj. Petzold’, no. 1213, held in Vienna in 1842, which describes the work as ​“superbe épreuve d’une pièce très rare”.
/