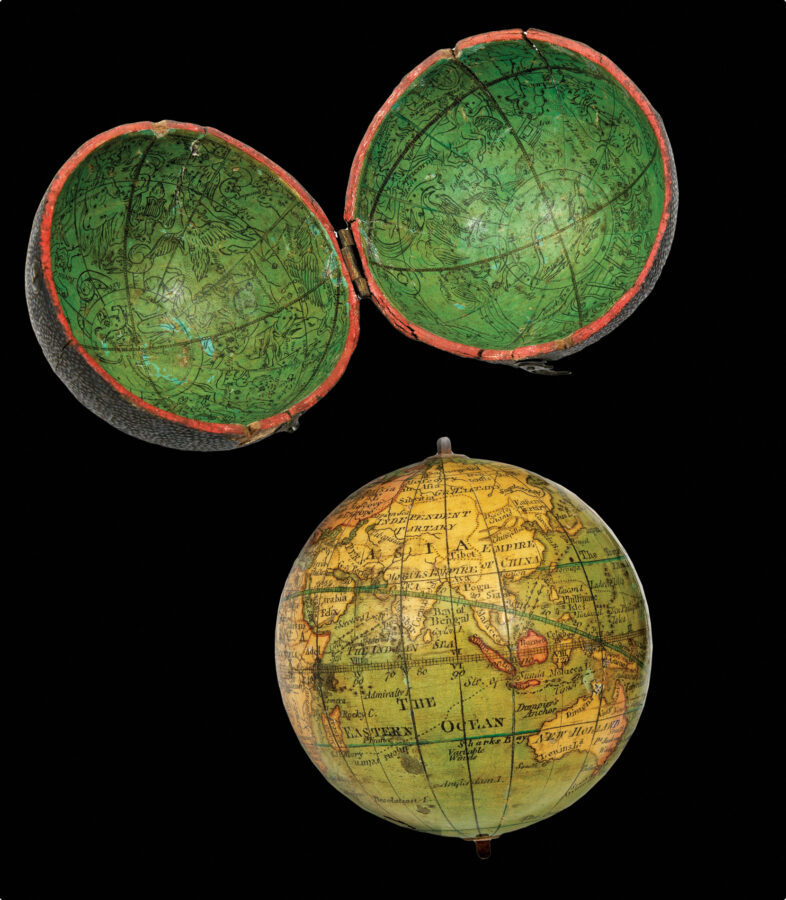 Charles Augustus Schmalcalder (1786- ) was a German born mathematical instrument maker and dealer, working in London at the beginning of the nineteenth century. He is known to have set up shop in around 1805, on Little New Port Street in Soho, where he billed himself as a ​“mathematical and optical instrument maker”. In 1808 he moved into number 82 The Strand where he stayed for the next twenty years. He was best known during his lifetime as the inventor of the prismatic compass, however, he produced all manner of instruments, including wheel-barometers, theodolites, hydrometers, saccharometers, and pocket globes. In 1827, he moved to 399 The Strand where he operated the business until his retirement in 1840. The business was taken over by his son John Thomas Schalcalder.

The present globe is was the work of Nicolas Lane (fl. 1775–1783) whose business was particularly associated with pocket globes. Little is known about Lane’s output, however, Dekker suggests that the globes were produced from the earlier works of Ferguson and Dudley Adams. When and where Lane acquired the plates is unknown, however, we have been able to trace an almost identical globe — to the present example — dated 1809 bearing Lane’s imprint. Schmalcalder’s only addition is to apply his paste over to Lane’s imprint.

The globe shows the prime meridian from London, the tracks of both Anson and Cook. Australia is drawn to include Cook’s voyages. Both the Arctic and Antarctic are marked ​‘Frozen Ocean’.

The celestial gores — first published by Cushee in 1731 — are geocentric in orientation; and, in a departure from most previous pocket globes are concave thus depicting the constellations as seen from Earth. Previous pocket globes, most notably John Senex’s pocket globe of 1730, simply used gores intended for celestial globes, thus rendering the night sky in reverse when pasted to the inside of the case. The difference is most noticeable in the orientation of ​‘Ursa Major’, with the bear facing the other direction.