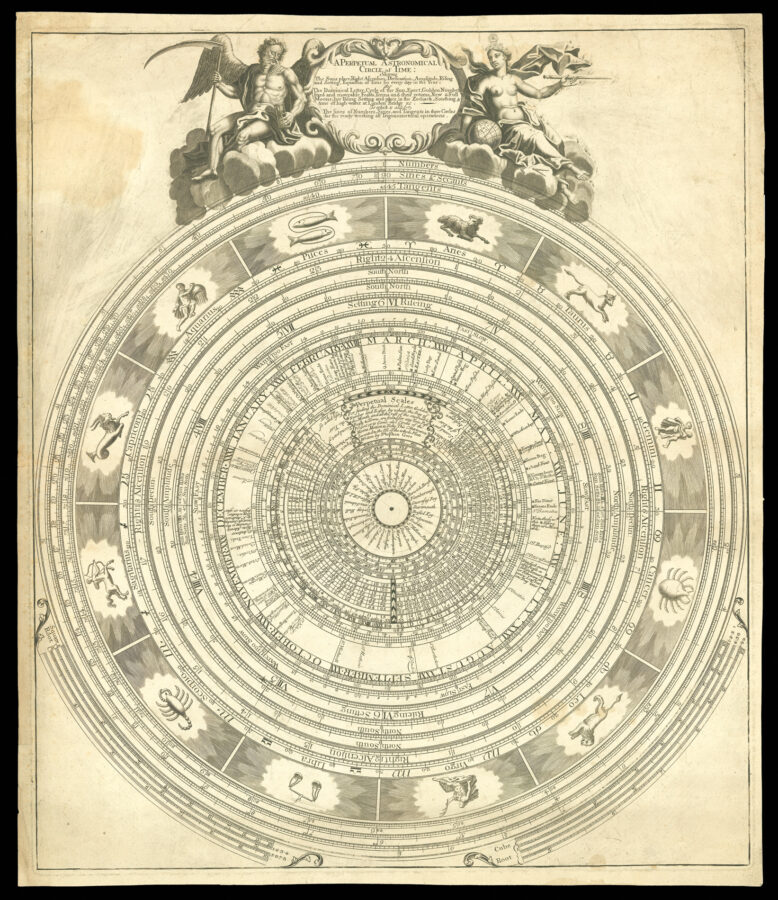 A Perpetual Astronomicall Circle of Time Shewing The Suns place, Right Ascension, Declination, Amplitude, Rising and Setting, Equation of Time for every day in the Year. also The Dominical Letter, Cycle of the Sun, Epact, Golden Number fixed and moveable Feasts, Terms and their returns, New & Full Moons, her Rising Setting and place in the Zodiack, Southing & Time of high water at London Bridge &c. To which is added The lines of Numbers, Sines, and Tangents in three Circles for the ready working all Trigonometrical operations. Perpetual Scales … This Contrivance Invented & the Use of the whole Plate Writen by Stephen Gore

A rare and elaborately engraved ephemeris, an astronomical tool. The five central disks are rotated to allow the user to calculate the positions of celestial bodies at a given time. It is apparently designed by one Stephen Gore, who has not been traced in usual sources for British mathematicians of the period. This exemplar is assumed to be a proof before addition of the imprint.

The plate history of this item is complicated by its rarity; three states are assumed, but only two exemplars exist. It seems likely that the first state (if it exists) was published towards the end of the reign of Queen Anne (d. 1713). The second state (this exemplar) demonstrates clear evidence of re-engraving by a second engraver. Significantly, for dating purposes, these additions include ​‘K. George Procl[aimed].’, recording the accession to the British throne of King George (I) on 1st August, 1714; George’s birthday is also inserted, although this is less obviously a later insertion.
A (presumed) third state exists at Kansas University. The Kansas copy bears the joint imprint of the partners Benjamin Scott and Charles Price inserted outside the lower border, and the cusps outside the ephemeris are filled with two panels of instructive text; ​‘The description and use [of the Ephemerides] …’ and ​‘Of the artificial lines of numbers sines and tangents. …’; a third cusp contains an advertisement for Scott and Price’s goods. However, their description makes no reference to the central parts of the engraving, in their words ​“wanting the moveable part consist[ing] of five circles”.
/