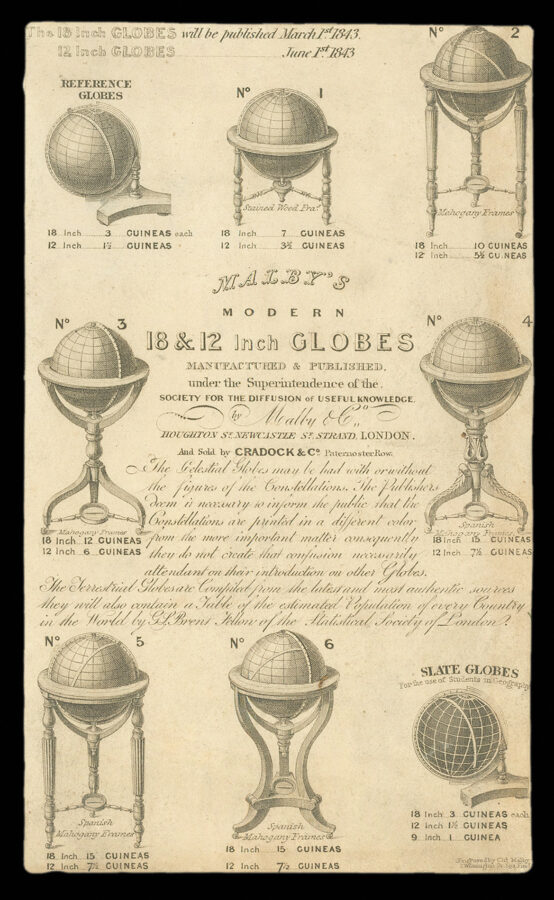 Malby’s Modern 18 & 12 Inch Globes Manufactured & Published under the Superintendence of the Society for the Diffusion of Useful Knowledge.

A rare advertisement for Malby’s 12 and 18 inch globes.

This small broadside shows the stock of Malby’s 12 and 18 inch globes for the year 1843. The stock ranged from the cheapest ​“reference globes” and ​“slate globes” ​“for the use of Students in geography”, which could be had for as little as one guinea, to the 18 inch globe with Spanish mahogany furniture, which would set you back 15 guineas.

The firm of Malby & Co., publishers and map-and-print colourers, appears to have started with Malby Senior, who occupied premises at 22 Houghton Street, Clare Market, London, around 1839. Sometime afterward he moved to 3 Houghton Street. Later, the firm was directed by his son, Thomas Junior, as Malby & Son. A number of their globes ‒ perhaps all ‒ were engraved by C. Malby, but his precise relation to Thomas Senior is not clear.

One novelty introduced by Malby was the depiction of lines of magnetic variation on a globe. The firm was continued by Thomas Malby III, but it is not known for how long. After 1860, Malby’s globes designed for the Society for the Diffusion of useful knowledge appear to have been published by Edward Stanford.