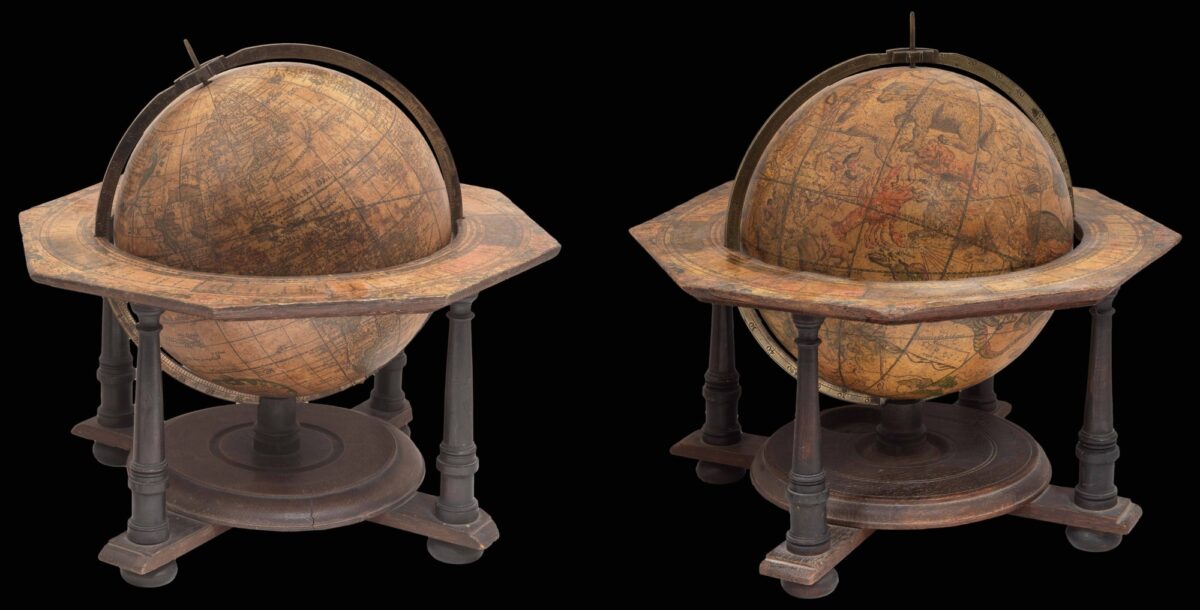 Popularising the new scientific ideas of the Enlightenment in Germany

Biography
Johann Gabriel Doppelmayr (?1677–1750) was an astronomer and geographer who, from 1704 until his death, occupied the post of Professor of Mathematics at the Aegidien Gymnasium at Nuremberg. His activities as a globemaker formed part of his efforts to popularize the new scientific ideas of the Enlightenment in Germany. For that purpose, he translated several works into German, one of which was N. Bion’s work on globes. He also produced several celestial maps, which were later included into his most famous work ​‘Atlas novus coelestia’ of 1742, published by the house of Johann Baptist Homann.

Geography
Doppelmayr’s first globes of 1728 were 320mm (12.5 inches) in size, and the present example of 1730 are slightly smaller, measuring 200mm (8 inches) in diameter. The cartography follows Doppelmayr’s 1728 globes with Spitzbergen drawn as an island, as it was known to be since De Rijp and Giles circumnavigated it in 1707. The river system is North America is represented based on the explorations of De la Salle, up to 1687, and California is drawn as a peninsula. Australia appears according to Tasman’s discoveries, but Tasmania does not appear. There is a label for a hypothetical southern continent, reading ​“Terra Australis Incognita” without any contours shown. Dampier’s exploration track is drawn and labelled ​“Navigatio Dampierie 1688”. The globe, which is in Latin, includes scales for degrees, the zodiac, the Julian calendar, the Gregorian calendar and for 32 compass points.

Astronomy
The cartography is given in Latin, and the equator and ecliptic are both graduated and labelled. There is a magnitude table labelled ​“magnitudo stellarum”, and the Milky Way is identified as ​“Via Lactea”. The Magellanic Clouds are shown but not labelled. The globe depicts 48 Ptolemaic constellations, as well as the non-Ptolemaic constellations of Coma Berenices, Antinous, Crux and Columba. It also presents the 12 southern constellations of Plancius, and all of those of Hevelius.