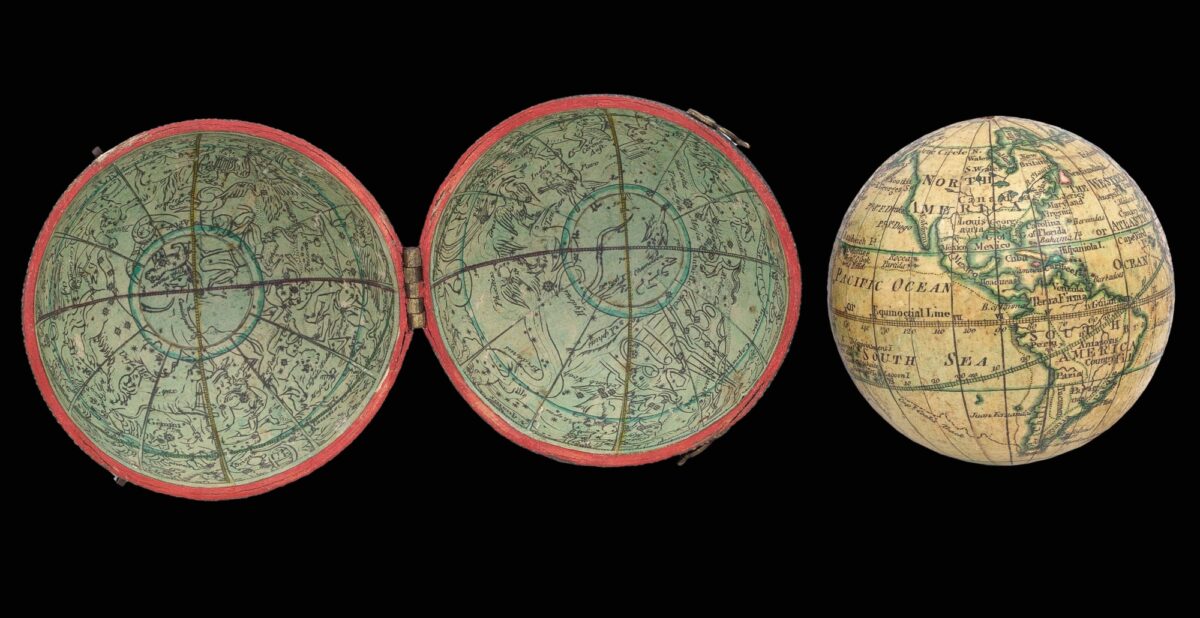 A New Globe of the Earth by N. Lane.

Biography
The present globe is the work of Nicholas Lane (fl1775-1783), whose business was particularly associated with pocket globes. Lane is best known for producing a very popular 70mm (2.75 inches) globe in around 1779. The globe would be updated in 1807 by his son Thomas Lane (fl1801-1829), who continued to revise the globe up until the 1820s; not only did he sell the globe under his own name, but he also sold them wholesale. Lane’s globes were engraved by Prockter.

Geography
Lane produced a pocket globe in 1776 with the prime meridian through the Canary Islands, and he updated the globe sometime after 1779 with the prime meridian through London – the present example is the latter. The equator is graduated twice, once for degrees and once for hours and it is labelled ​“Equinoctial Line”. The ecliptic is graduated and marked with the symbols of the signs of the zodiac. Monsoons are marked in the Indian Ocean and the Chinese Sea, and the Chinese Wall is shown. California is represented as a peninsula and Australia is drawn according to the discovery made by Cook on his first voyage, and ​“Dimens Land” is still connected to the mainland. The globe shows the track of Captain Cook’s voyage, as well as Ansons’ departure and return voyages, where Anson’s ​“going out” voyage passes close to the Sandwich Isles. Captain Cook’s death is noted: ​“Owhyhee / Here C. Cook / was Kill’d”.

Astronomy
The gores line the inside of the case, and the same celestial cartography is used as Richard Cushee’s 1731 globe.