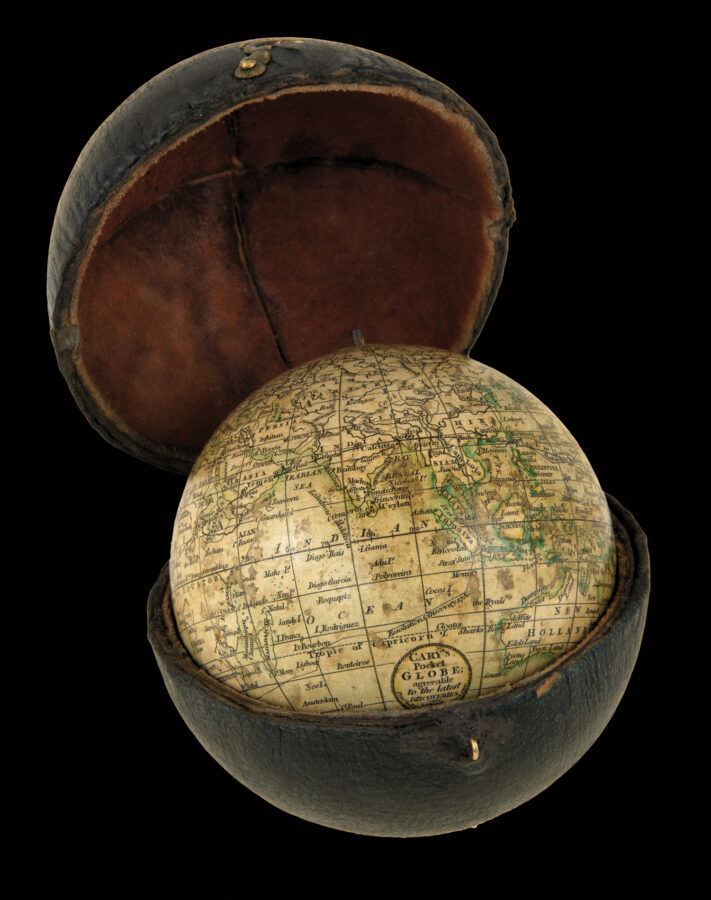 One of the earliest globes to be published by Cary

One of the earliest globes published by the Cary firm.

The globe is dedicated to the exploits of Captain James Cook, and all three of his voyages are marked. The first, from 1768–71 when he commanded the HMS Endeavour, reached Australia and circumnavigated New Zealand. He discovered the Endeavour Strait (marked on the globe) in 1770 between the Australian mainland and Prince of Wales Island and named it after his ship. Botany Bay also appears, named for the specimens found there by Sir Joseph Banks, the naturalist who sailed with Cook. The second voyage, from 1772–75 when he commanded the HMS Resolution, reached the Arctic Circle. His third and final voyage from 1776–79, with HMS Resolution and Discovery, made Cook the first European to have formal contact with the Hawaiian islands in 1778; it was also where he died after a confrontation with natives, commemorated with the inscription ​‘Owhyee (Hawaii) where Cook was killed’. The globe also shows the return journey of Cook’s expedition under the command of John Gore and Captain James King.

Cook’s legacy is also visible in the inscriptions marking the passage of the First Fleet, the eleven ships which founded Britain’s colony in Australia, made possible by Cook’s explorations. Among those marked are the Lady Penrhyn, and the routes of the ships commanded by John Marshall and John Shortland, the naval agent for the First Fleet. The extent of British exploration in the Pacific area is shown by the plethora of British place names. These include Duke of York Islands in Papua New Guinea, named after Prince Edward, younger brother of George III, by Philip Carteret, who circumnavigated the world in 1766–9; and Palmerston Island, an atoll named after Henry Temple, 2nd Viscount Palmerston (then Lord of the Admiralty).

As well as incorporating Cook’s voyages, the globe also marks other contemporary explorations. It appears to be the first globe to include information derived from Alexander Mackenzie’s 1789 explorations in north-western Canada, showing ​‘Mackenzie’s R[iver]’ a decade before Mackenzie’s own maps were published in 1801. Tasmania is still marked ​‘Diemensland’ and appears as a peninsula. The existence of the Bering Strait had now been confirmed, and it appears between America and Asia. Finally, the globe shows the 1773 Arctic exploration of Constantine Phipps, 2nd Baron Mulgrave (which had a young Horatio Nelson on board), where Phipps was the first European to describe the polar bear as a distinct species.

The Cary family of globe makers was founded in the late 18th century by John Cary (1755–1835). The son of a Wiltshire maltster, Cary was in the engraving and map-selling business from about 1782 at Johnson’s Court, Fleet St, London and then at The Corner of Arundel St Strand. He had previously been apprenticed to William Palmer and became freeman in 1778. The first globes by Cary were advertised in the ​‘Traveller’s Companion’ in January 1791. The advertisement mentions that 3 1/2″, 9″, 12″ and 21″ diameter terrestrial and celestial globes were made from ​‘entire new plates’, presumably a proud boast for a maker launching his globes on the market for the first time, in a climate where copper plates for gores were commonly bought or inherited and altered or otherwise amended. The address of the company at this time was 181 the Strand, and the company was commonly known as J & W Cary, to recognise the contribution of John’s brother William (1759–1825). Both brothers produced a number of instruments and maps aside from their globes and in all projects other than their globes, the brothers operated as separate business entities. William himself was primarily an optician and nautical instrument maker, having been apprenticed to Jesse Ramsden and had his own premises further down the Strand at Nos. 272 and 182. 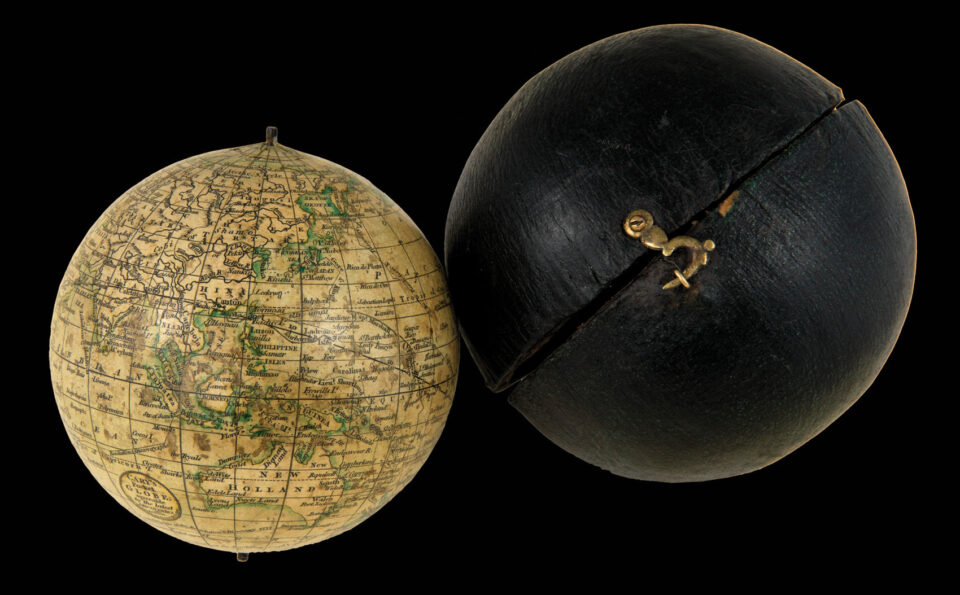