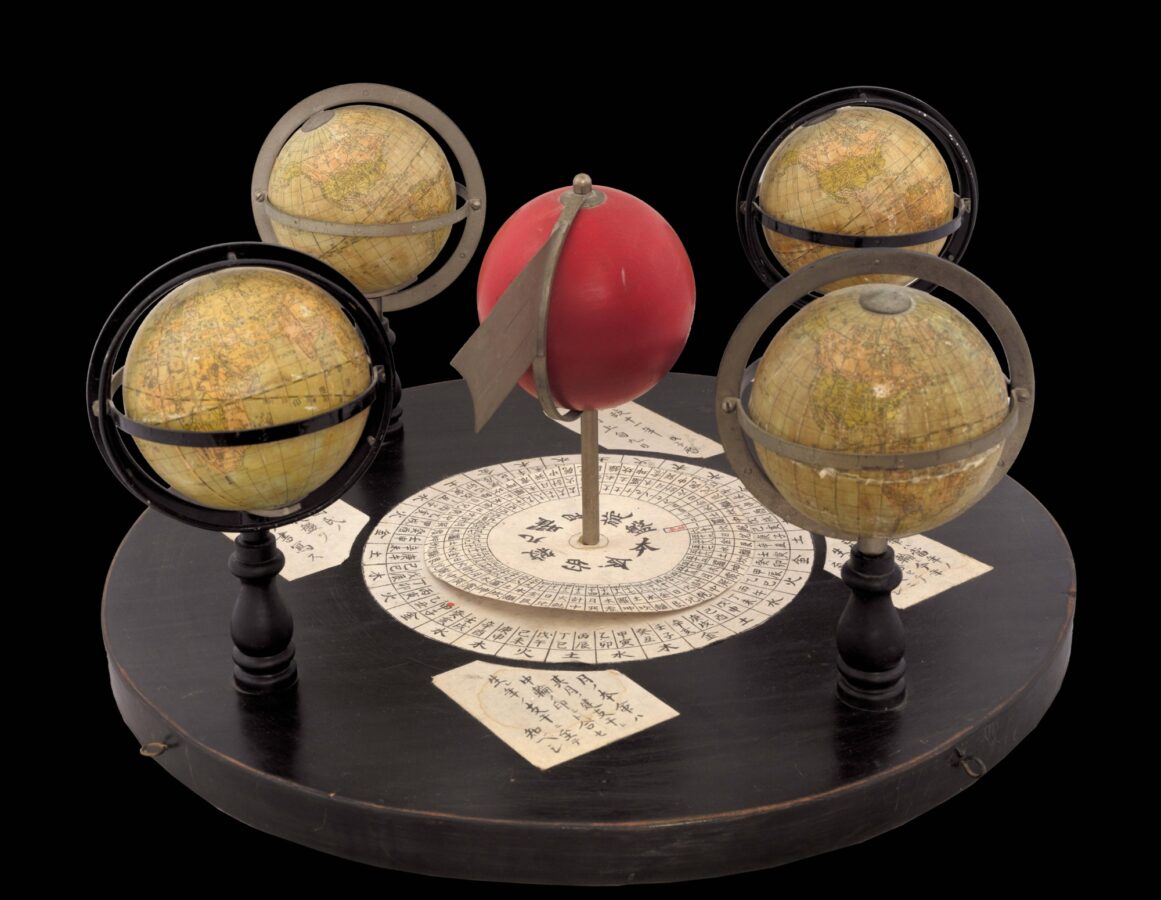 A unique fortune-telling astronomical instrument made in Edo, Japan, based on the ​“Nine-star Ki” (kyūseikigaku 九星気学) form of divination, adapted and refined from traditional Chinese methods by Shinjiro Sonoda (1876–1961) in 1924.
​“Nine-star Ki” refers to nine-year and nine-month cycles of the Ki/​Qi element on Earth, which relate to the solar and seasonal cycles. These cycles are believed to have common effects across the planet on mental and physical development, and life experiences. The ​‘stars’ of ​“Nine-Star Ki” are numbers representing those cycles, which can be calculated for anyone using their birthdates. This instrument was specifically designed to calculate the numbers of ​“Nine-Star Ki”.
Constructed on a circular wooden plate are four small terrestrial globes on turned stands, which surround a red sphere mounted on a metal pole at the centre. A bronze signpost attached to the sphere is engraved with three characters ​“寒”, ​“暖”, ​“暑” (“cold”, ​“warm” and ​“hot” respectively referring to the seasons .
Directly beneath the sphere, are two circular manuscript charts. The smaller, uppermost chart is rotatable, bearing the title ​“本命的殺九 曜星旋盤” (“Fortune-telling Nine astronomical bodies rotating chart”). It shows three concentric rings radially divided into sixty sections. The first ring shows a cycle from ​“一” (one) to ​“六十” (sixty) in anti-clockwise order, and there are two characters ​“今年” (“this year”) marked in red above the former, indicating the beginning of the cycle. In the second ring, every consecutive nine characters represent the Navagraha, or ​“nine celestial bodies of universe” in Hindu astrology. They represent different elements of nature, as well as season, personality, family and direction. These are ​“日” (the Sun), ​“月” (the Moon), ​“火” (Mars), ​“水” (Mercury), ” 木” ( Jupiter), ​“金” (Venus), ​“土” (Saturn), ​“羅” (Solar Eclipse), and ​“計” (Lunar Eclipse). The third ring shows the names of Bagua 八卦, the eight symbols of Taoist cosmology, which are ​“乾” (Heaven), ​“坤” (Earth), ​“震”( under),“坎”(Water),“艮”(Mountain),“巽”(Wind),“離”(Flame), ​“兌” (Lake).
The larger chart beneath is attached to the plate, showing two more rings. The first ring is an extension on the Bagua ring it encircles. It shows the sexagenary cycle, which is a cycle of sixty terms, each corresponding to one year, used for reckoning time in China and other parts of East Asia. The outermost ring has thirty divisions, each containing a character that represents one of the ​“Five Phases’ (“五行”): ​“木” (Wood), ​“火” (Fire), ​“土” (Earth), ​“金” (Metal), and ​“水” (Water). The system of five phases was used for describing interactions and relationships between phenomena, including geomancy and astrology. Rotating the top chart to align the divisions on the five rings would give a combination of numbers and signs. Hence, using one’s date of birth, one could rotate the chart to reveal a set of numbers and figures that signifies one’s fortune, according to the divination of the ​“Nine-Star Ki”.
Surrounding the main chart are four sheets of manuscript text. The top right sheet bears the date ​“文政十一年戊子歷五月上旬九日” (“May 9th, Eleventh year of Bunsei era — 1828”), yet this does not appear to be the year of publication, since Korea is labelled as ​“大韓民国” (“Republic of Korea”) and China ​“中華民國” (“Republic of China”) on the terrestrial globes. Given the establishment of the Republic of Korea in 1948, and the Republic of China in 1949, the instrument can be dated to roughly the following decade.
This instrument is extremely rare, and perhaps unique. We are unable to trace any other examples. 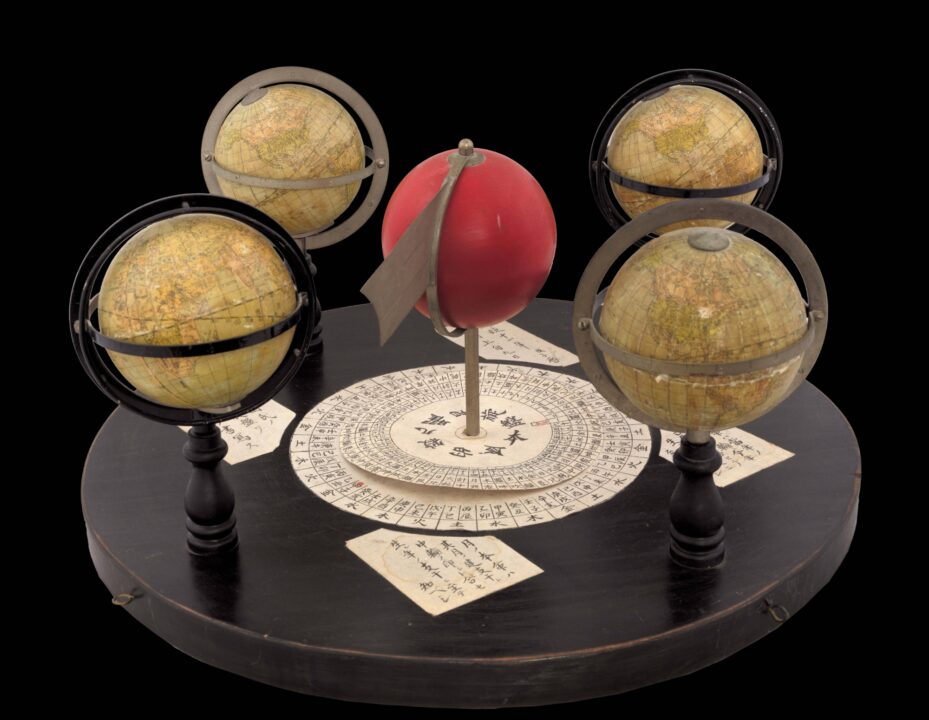