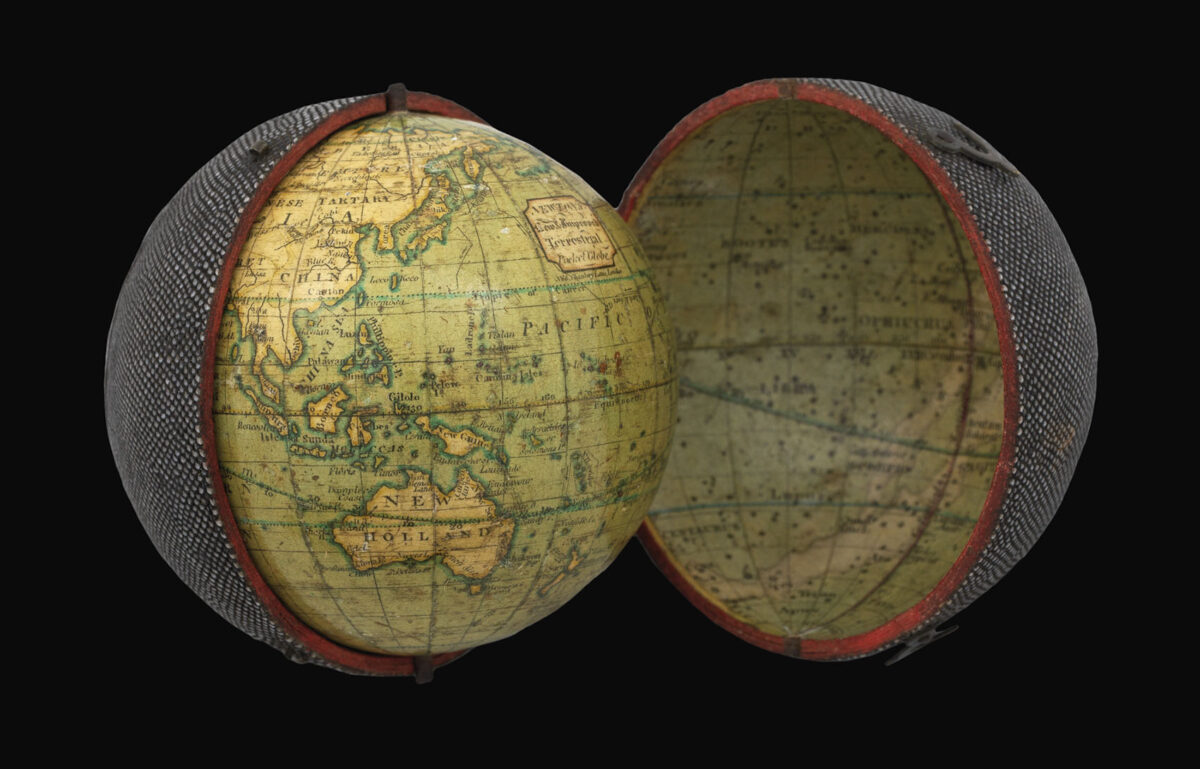 Biography
John Newton (1759–1844) was trained by Thomas Bateman (fl1754-81), who had previously been apprenticed to Nathaniel Hill. Newton’s first globe was a revised edition of Hill’s 1754 pocket globe, which he published in 1783 in association with William Palmer. The partnership dissolved shortly after, and Newton continued to publish the pocket globe under his own name. John’s second son William Newton (1786–1861) joined the firm between 1814–1816, which traded under the name J. & W. Newton. In the same year the firm produced a new series of globes, including a new pocket globe.

By the 1830s the firm was also active as a patent agent, and was joined by Miles Berry, a civil engineer and patent agent, after which the firm was known as Newton, Berry & Son. In 1842, William’s eldest son, William Edward Newton (1818–1879), joined the business, followed by his brother Alfred Vincent Newton (1821–1900). The firm became known as W. Newton & Son, or once again, on the death of William, as simply Newton & Son from 1861 until about 1883. Perhaps the greatest triumph for the Newton family was the Great Exhibition of 1851, where, aside from the globes they exhibited from 1 to 25 inches in diameter, they were awarded a prize medal for a manuscript terrestrial globe of six feet in diameter.

Geography
In a departure from pocket globes produced in the eighteenth century Newton has mounted the present globe in a graduated brass meridian ring. The ring fits into two slots in the paper horizon ring which is pasted on to the lower part of the case. This enables the globe to be positioned at an angle, mimicking the earth’s axial tilt.

In Australia, the southeastern coast is labelled ​“French disc.”, after the scientific expedition led by Nicolas Baudin (1800–1803). This is a contentious choice on Newton’s part. Baudin’s expedition was sent by Napoleon to complete the charting of Australia, and in particular to examine the Australian south coast in order to find a strait which supposedly divided the Australian landmass in half. Louis Claude de Saulses de Freycinet served as cartographer. The British explorer Captain Matthew Flinders was exploring the area at the same time, and the expeditions met each other in the consequently named ​“Encounter Bay”. Although Flinders completed the task before Baudin, he was captured and imprisoned for six years at Mauritius on his voyage home, along with his charts and manuscripts. This allowed the French explorers to print their account of the new discoveries before Flinders, and for Freycinet to produce the first complete chart of the Australian continent. The maps and charts prepared by Freycinet entirely ignored the discoveries of Grant and Flinders and depict the whole of the newly discovered coast of Melbourne to the border of Western Australia as the ​‘Terre Napoleon’.

To North America, several cities are are named on the east coast: Boston, New York, Philadelphia, Chesapeake, and Charlestown. The northwest coast is labelled ​“Vancouver’s disc.”, after George Vancouver’s 1791–95 expedition. Further north Alaska is marked ​“Russian Settlements”. The Russian-American Company was formed in 1799, and set up a trading post in Alaska for the purpose of hunting sea otters for their fur. The United States would later acquire Alaska from the Russian Empire in 1867. To the west of Alaska the Bering Straits are shown but not named.

To the southern Pacific is engraved a figure-of-eight known as an analemma: ​“An Improved Analemma shewing the sun’s declination & place in the zodiac for each day of inspection”. In the South Pacific Ocean additional information is provided — ​“NB. This improved Analemma is intended to supercede the necessity of the Ecliptic Line hitherto unnecessarily drawn upon the Terrestrial Globe” — although Newton has failed to remove the line of the ecliptic that still surrounds the globe. On an example at the National Maritime Museum, dated 1816, the line of the ecliptic is not present.

Astronomy
Only the upper hemisphere is printed with designs depicting astronomical phenomena. To the rim is a zodiacal scale, with symbols of the signs of the zodiac. The rest of the hemisphere depicts the solar system, with the newly discovered Uranus named after its discoverer William Herschel, who had discovered the planet on 13th March, 1781. It was the first planet to be discovered since antiquity, and he became famous over night. 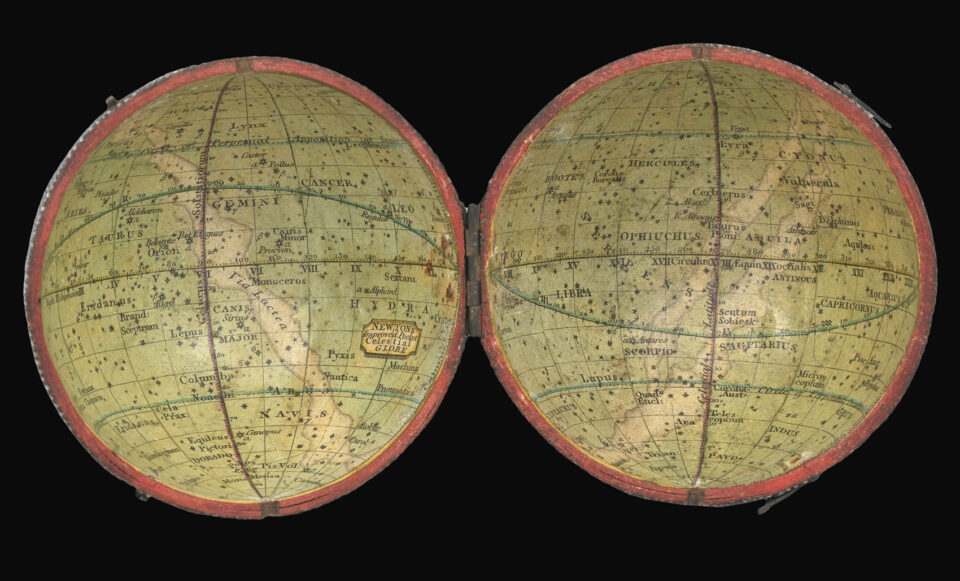 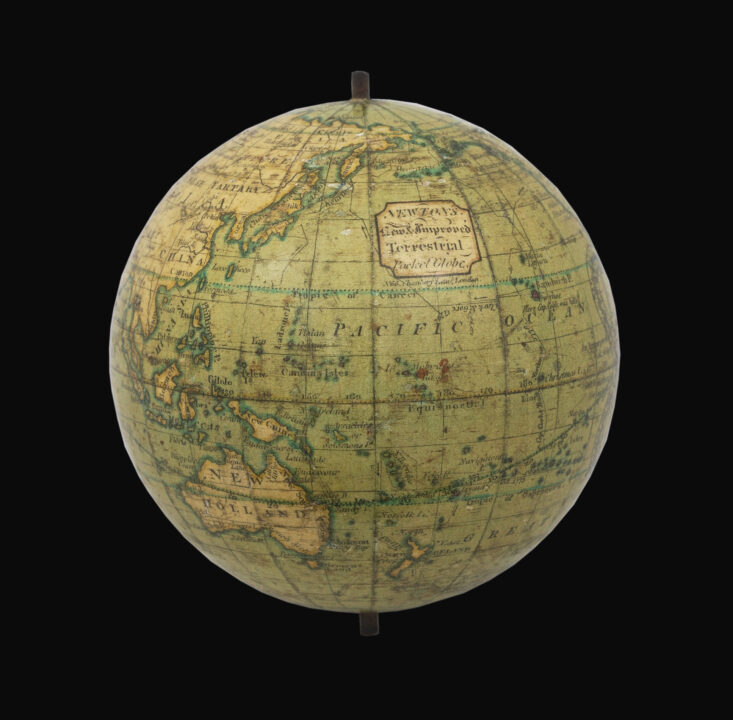 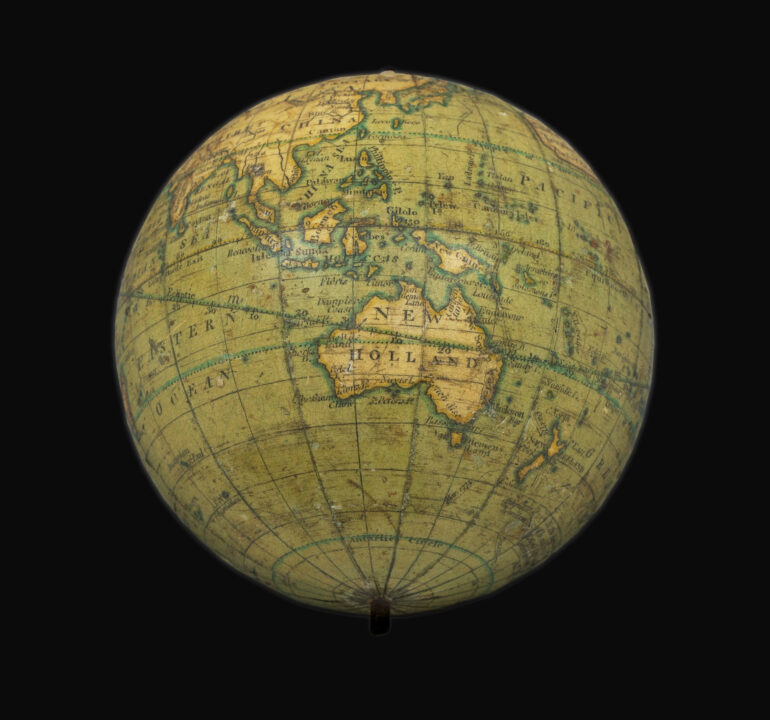 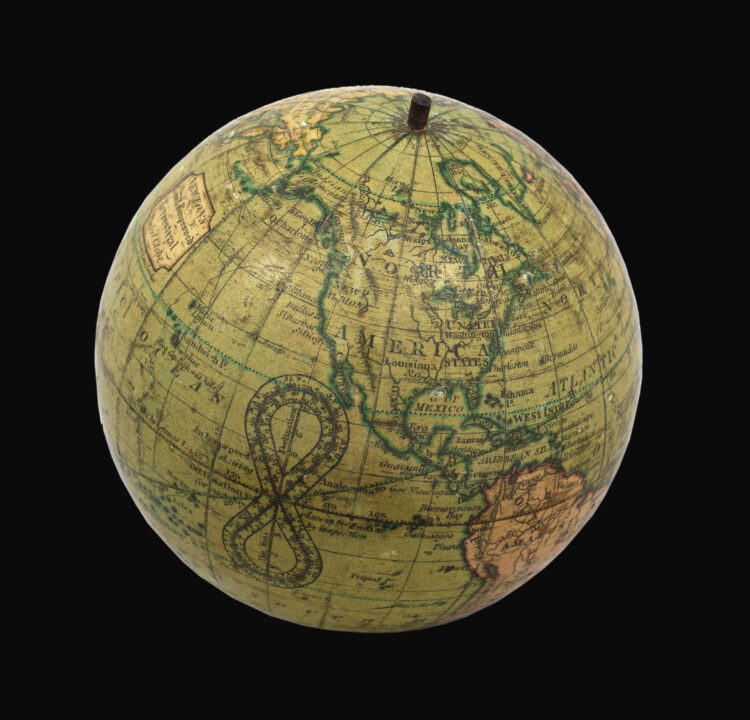 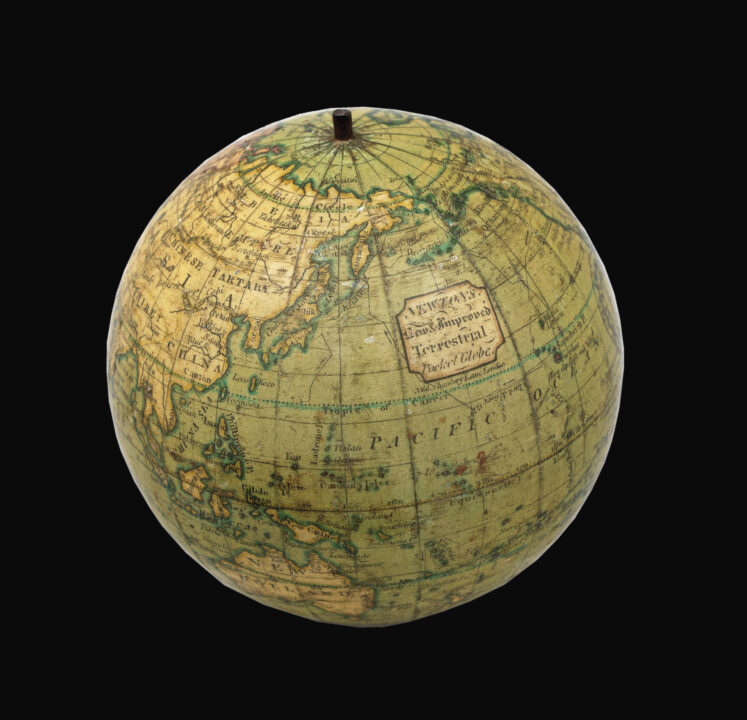