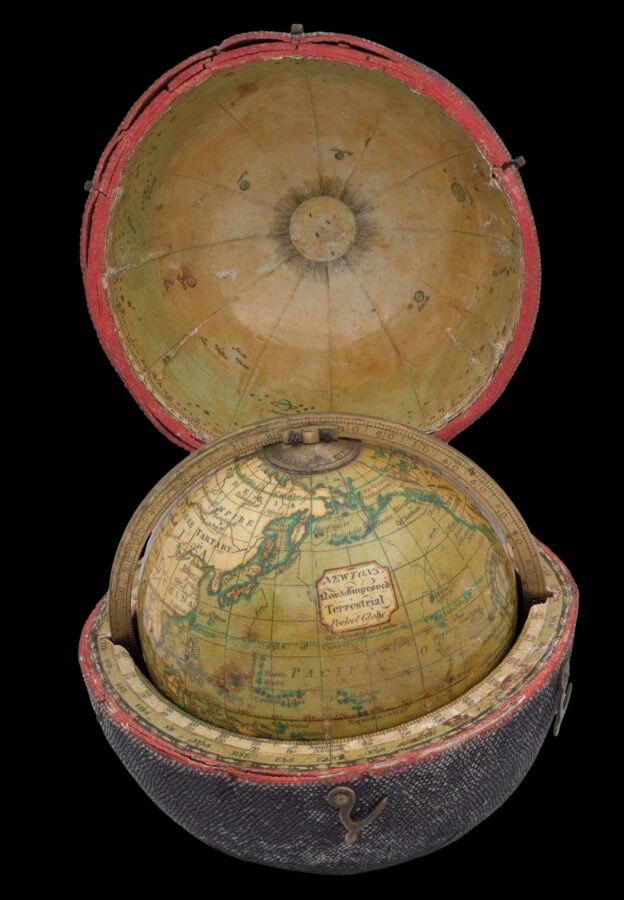 A fine pocket globe showing the latest European discoveries, serving as a memento of the exploration race between British and French sailors.

Geography
In a departure from pocket globes produced in the eighteenth century, Newton has mounted the present globe in a graduated brass meridian ring. The ring fits into two slots in the paper horizon ring which is pasted on to the lower part of the case. This enables the globe to be positioned at an angle, mimicking the earth’s axial tilt. In Australia, the southeastern coast of the bite is labelled ​“French disc.”, after the scientific expedition led by Nicolas Baudin (1800–1803). This is a contentious choice on Newton’s part. The British explorer Captain Matthew Flinders was exploring the area at the same time, and the expeditions met each other in the consequently named ​“Encounter Bay”. Although Flinders completed the task before Baudin, he was captured and imprisoned for six years at Mauritius on his voyage home, along with his charts and manuscripts. This allowed the French explorers to print their account of the new discoveries before Flinders, and for Freycinet to produce the first complete chart of the Australian continent. The maps and charts prepared by Freycinet ignored the discoveries of Grant and Flinders and depict the whole of the newly discovered coast of Melbourne to the border of Western Australia as the ​“Terre Napoleon”. In North America, the northwest coast is labelled ​“Vancouver’s disc.”, after George Vancouver’s 1791–95 expedition. Further north, Alaska is marked ​“Russian Settlements”. The Russian-American Company was formed in 1799, and set up a trading post in Alaska for the purpose of hunting sea otters for their fur. The United States would later acquire Alaska from the Russian Empire in 1867. To the west of Alaska the Bering Straits are shown but not named. To the southern Pacific is ​“An Improved Analemma shewing the sun’s declination & place in the zodiac for each day of inspection”. In the South Pacific Ocean additional information is provided — ​“NB. This improved Analemma is intended to supercede the necessity of the Ecliptic Line hitherto unnecessarily drawn upon the Terrestrial Globe” — although Newton has failed to remove the line of the ecliptic that still surrounds the globe.

Astronomy
Only the upper hemisphere is printed to the inside lining of the case with designs depicting astronomical phenomena. To the rim is a zodiacal scale, with symbols of the signs of the zodiac. The rest of the hemisphere depicts the solar system, with the new planet Uranus named after its discoverer William Herschel, who had found the planet on 13th March, 1781. It was the first new planet to be discovered since antiquity.