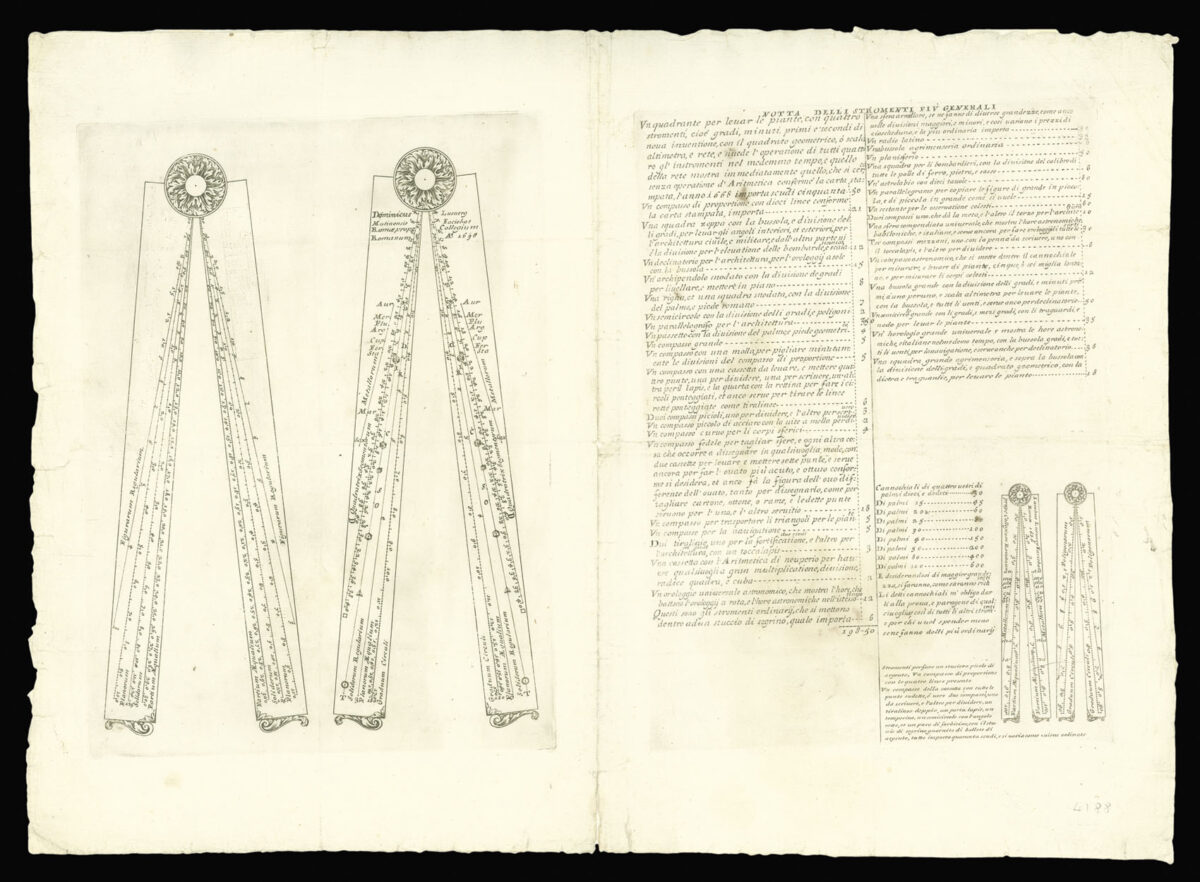 An extremely rare survival of an illustrated and priced broadside sales catalogue advertising the diverse scientific and drawing instruments manufactured by Domenico Lusvergh in Rome.

Lusvergh, who inherited the family instrument-making business in 1689 from Giacomo (his uncle or grandfather), offers complete sets of astronomical, perspective, drawing and surveying tools, telescopes of various sizes, an adaptation of Galileo’s proportional compass and, on a separate sheet, a quadrant and a set of decorative brass fittings available for the instruments. This ephemeral document, of which no other copy with the quadrant sheet has been traced, provides important contemporary evidence of the pricing, marketing and use of a wide range of instruments used by artists, surveyors and scientists.

Among a large assortment of artists’ drawing instruments, the advertisement prominently illustrates Giacomo Lusvergh’s innovative adaptation of Galileo’s proportional compass, which was the subject of a pocket-sized ​“user’s guide” produced by Domenico in 1698, ​‘Di Galileo galilee Il compasso adulto per opera di Giacomo Lusvergh’ (Rome, Domenico Antonio Ercole, 1698). One of several seventeenth- century versions of Galileo’s useful tool, Giacomo had modified the design of the instrument to follow the general trend of the late 1600s, significantly reducing its size and eliminating the quadrant so that it could fit into the pocket case of a variety of drawing instruments.
This facilitated portability, an important requirement as the market for the instrument increased and diversified, becoming ​“standard issue” for surveyors, engineers and artists with the need to perform quick calculations. The large image on the broadsheet, depicting the front and back of an instrument signed by Domenico in 1698, may have been originally engraved for the ​“user’s guide.” The little-known quadrant plate was engraved even earlier; the instrument is signed by Giacomo Lusvergh and dated 1668, exactly as seen in the price list. The broadside, while undated, presumably was produced either as an insert for the small-format guide or as a promotional leaflet in the first decades of the eighteenth century. traces of a cancel slip are evident on the leftmost compass, appearing to cover existing text on the original copper plate prior to printing.

The engraved text on the broadside comprehensively lists Domenico’s merchandise, including the prices in scudi. The quadrant plate is the first item listed for sale, the compass is the second. In the lower corner of the broadsheet, a smaller compass, made by Giacomo in 1686, is offered with a set of silver instruments. These are the only instruments illustrated, and the first two plates are explicitly mentioned in the main list: ​“la carta stampata.” Domenico offers a variety of drawing instruments either singly or in packages. Included among them is a parallelogram, described by Christopher Scheiner in 1631, for making copies of drawings or manipulating proportions in drawings. A list of 21 different instruments, all priced individually, are offered as a group in a ​“stuccio di segrino”, a case costing 6 scudi, for a total of 198.50. Several sets of brass instruments by the Lusverghs, comprising anywhere from eight to several dozen instruments, survive in their original cases in the Medici collection of scientific instruments (now the Istituto e Museo di Storia della Scienza, Florence). The Museum of the history of Science, university of oxford, possesses an example of the quadrant fitted with the ball and socket joint and brass bosses as advertised on the broadsheet.

Domenico Lusverg(h) [or Lusuerg] (1669–1744) was either the grandson or nephew of the renowned Modenese instrument maker Giacomo/​Jacopo Lusverg(h) (c. 1636–1689). Giacomo had an active workshop in the Piazza of the Collegio Romano between 1672 and his death in 1689, at which point, Domenico took over the business.
/