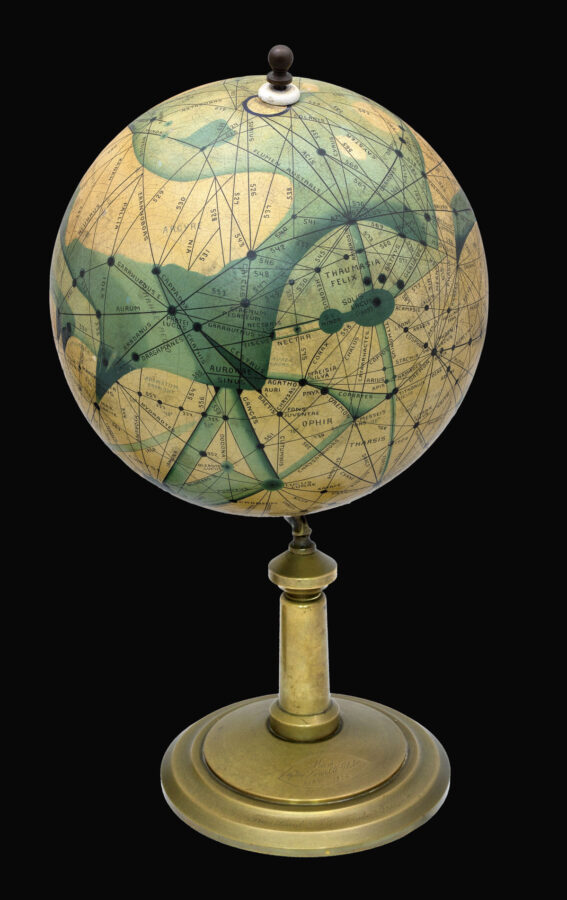 A rare and fascinating manuscript globe of Mars made during a period of renewed interest in the red planet and suggestive of the possibility of Martian civilisation.

Biography
Emmy Ingeborg Brun (1872–1929) was a Danish writer, socialist and astronomer. She had no formal training — her father did not allow her to go to university — and spent long periods of her life bedridden, but was fascinated by the theories of contemporary astronomers Percival Lowell and Giovanni Schiaparelli, and the political scientist Henry George.

Mars in the Twentieth Century
Improving contemporary scientific observation of Mars was accompanied by a corresponding interest in socio-political thought in the planet as a potential site for socialism or communism. This took the form of fiction, like Alexander Bogdanov’s 1908 novel ​“Red Star”, and was also addressed in scientific theories. In 1855 Schiaparelli observed a network of dark lines on the Martian surface. When he published his findings, along with the first detailed modern map of Mars, he named them ​“canali”, and suggested that they were built by a socialist regime, as a planet-wide system suggested a lack of national boundaries (Basalla).

Lowell popularised these theories by publishing three books on the subject, claiming these lines were indeed a canal network and raising the possibility of a Martian civilisation, although he opted for a ​“benevolent oligarchy” (Basalla). Brun was intrigued by these canals, which she saw as evidence of a different, more co-operative form of society. Mars was the potential site for a socialist utopia — and in particular, a potential field for an implementation of Henry George’s theories of a land-tax, as proposed in his 1879 work ​‘Progress and Poverty’, in which he argued against a system of profit from renting land or property without contribution.

Brun adapted Lowell’s maps into manuscript globes, painting her interpretations on top of existing printed globes. After showing them to experts in the field, she donated them to various astronomical observatories and institutions. She sent one to Lowell himself in 1915, who replied warmly that it was ​“a capital piece of work”, although it was initially arraigned at customs because the officers thought it was a bomb.

Geography
The globe uses Lowell’s territorial observations and Schiaperelli’s nomenclature for the features, most of which is no longer used. The North Pole is inscribed ​“Nix 1909”, and the bronze base carries the inscription ​“Free Land. Free Trade. Free Men”, a slogan inspired by the work of the political economist Henry George, and a line from the Lord’s Prayer: ​“Thy will be done on earth as it is in heaven”. 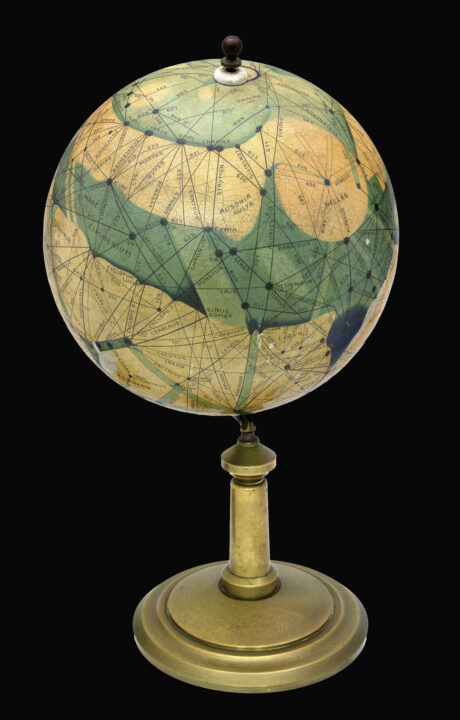