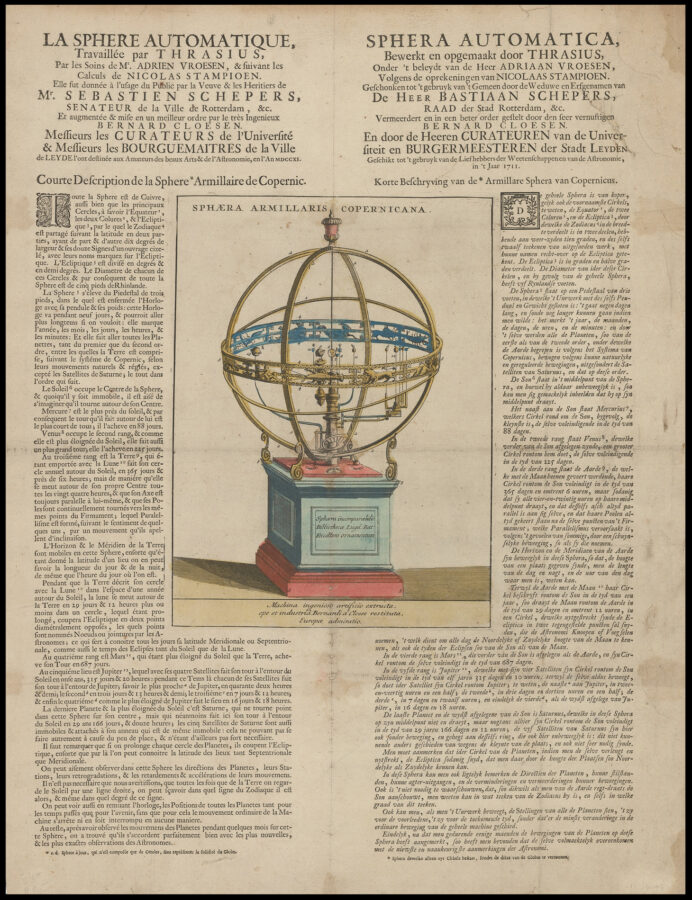 The Leiden Sphere, a mechanical armillary sphere or orrery, was built around 1670 by the clockmaker Steven Tracy, for the mayor of Rotterdam, Adriaen Vroesen. It is among the earliest and most elaborate mechanical planetaria to be operated by a clockwork mechanism. The device depicts the Copernican solar system, in which the earth and the other planets revolve around a stationary sun. In order of distance from the sun, the sphere includes Mercury, Venus, the earth (with its moon), Mars, Jupiter with the four Galilean satellites, and Saturn. The mechanism in the base of the sphere regulates an accurate representation of the orbital periods of each of the planets and their inclined orbits around the sun.

In 1710, this magnificent piece was given to the university of Leiden, where it could be seen in operation for more than a century. tracy incorporated two vertical brass rings (1.5 meters in diameter), which support a wide ecliptic (28.6 cm) composed of embossed constellation figures cut from sheet brass and mounted in rectangular frames. The sphere sits on a wooden cube (84 cm high). A 13 centimetres clock-face at the top of the pedestal displays the time and slot apertures indicate the day, month and year.

The sphere was the first such device to incorporate a geared model of Jupiter’s system. The basic design is similar to that of the RØmer-Horrebow ceiling planetarium, but with a number of important additions, including the incorporation of offset cams to give the model planets a Keplerian motion similar to those on the Rittenhouse orreries. The Saturn cam is inclined, whereas for the other planets (other than earth), the cams are horizontal.

The illustration provides an excellent depiction of the sphere, although it omits the eccentric collars, but adds a ring for the celestial equator and a spindle that passes upwards through the sun. There are apparently two editions of the broadside, one in French and Dutch (the present example) and one in English and Dutch. Both are exceedingly rare.

King, Henry C., Geared to the Stars… 1978: states that the first mechanical Copernican orrery was designed by Christian Huygens, and executed by Johannes van Ceulen (?Keulen) in 1682 — present predates it by 12 years??
/