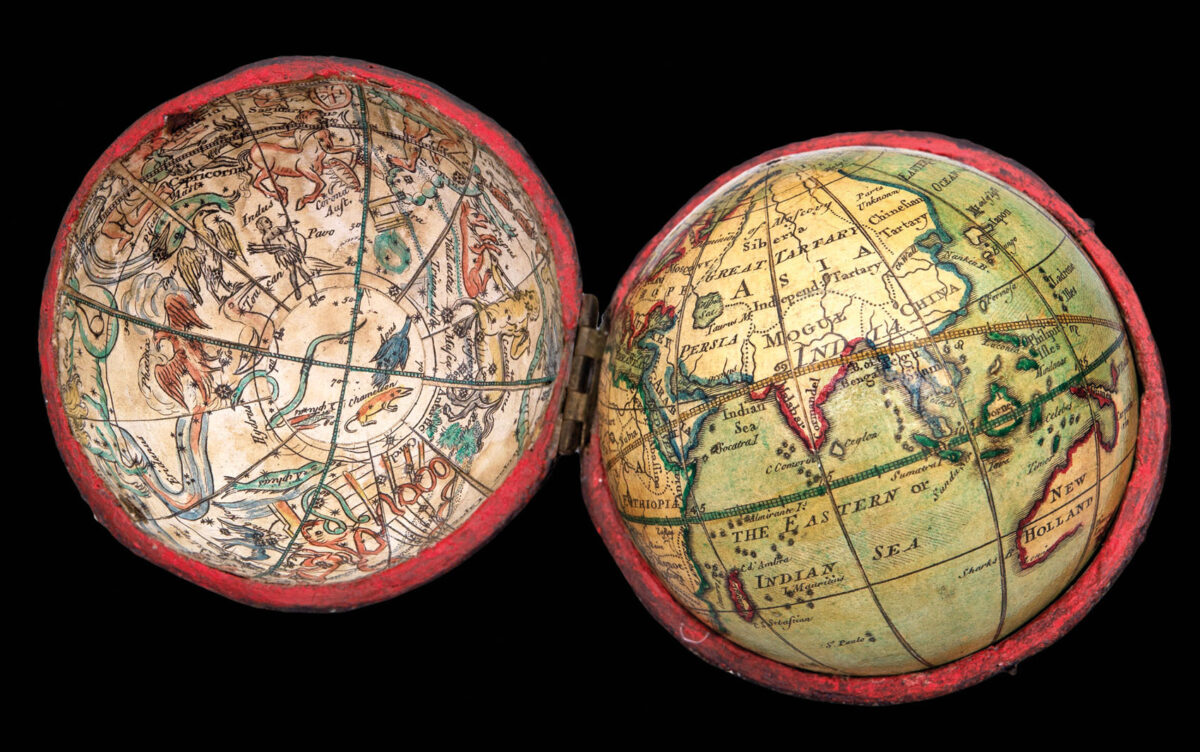 A pocket globe by the English globe maker Richard Cushee. Richard Cushee (1696-c1734) was a globe maker, surveyor, and publisher who worked at the sign of the Globe and Sun, between St Dunstan’s Church and Chancery Lane. He was apprenticed in 1710 to Charles Price and was made a freeman in 1721. In 1731, Cushee took on Nathaniel Hill (fl.1742–68) as an apprentice. In the same year, in collaboration with the instrument maker Thomas Wright (1692–1767), Cushee published the popular book by Joseph Harris, ​‘The description and use of the globes, and the orrery’. He also began to make pocket globes: these small terrestrial globes were used by Wright for his own orreries.

The globe demonstrates the cartographical confusion that still surrounded some areas of the world. The lack of knowledge of northwest America, as shown by the inscription ​“Unknown parts” near Hudson Bay, causes the coastline to disappear between Alaska and British Columbia. California is drawn as an island. The title cartouche has been strategically placed in the Pacific Ocean between America and Asia to avoid having to define the area more clearly, although Cushee has chosen to show the two continents as separate, perhaps after news of the exploration of the Bering Strait in 1728 reached Britain. Only the north coast of Australia (marked as ​“New Holland”) appears, along with Tasmania as ​“Dimens Land” and a tiny section of ​“New Zeeland”. The Antipodes would not be properly explored until the expeditions of James Cook. Both North and South Poles are marked, as are the meridian from London; the equator and the line of the Ecliptic, with signs of the zodiac; trade winds are marked by hatched lines in the ocean between the tropics. In Asia, the Great Wall is identified as ​“Ch. Wall’. Several seas are named including: ​“The Great South Sea”, ​“Pacifick Sea”, ​“Western Ocean”, ​“The Atlantick Ocean”, ​“Southern Ocean”, ​“The Eastern or Indian Sea”, ​“Eastern Ocean”, and ​“Ice Sea”.