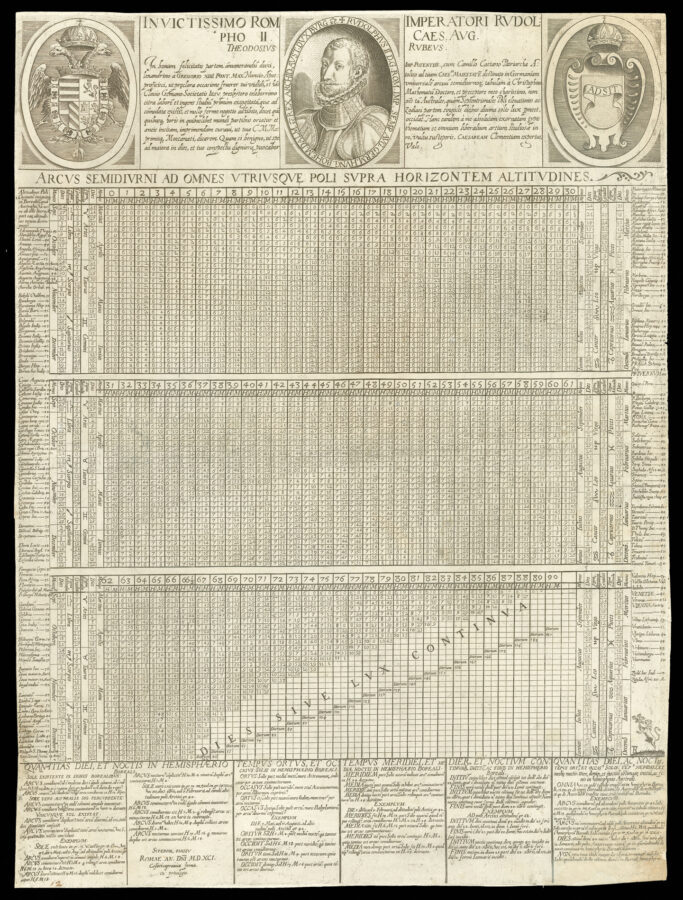 This fascinating broadside deals with the duration of the sun’s semidiurnal arc for places throughout the northern hemisphere. In theory, if one knew one’s location, one could ‒ by using the table ‒ gain an accurate date.

To the left and right of the table is a list of months, days (with every third day marked), and signs of the zodiac (with every third day marked). These form four columns, with two to the left and two to the right. The first column begins with 24 September and ends with 22 December; the second 21 March to 22 July; the third 24 September to 22 June; and the fourth 21 March to 22 December. The table is divided into 90 columns in three sections. each column marks a degree of latitude from zero (i.e. the equator) to 90 (the north Pole). each column is subsequently subdivided into hours and minutes of the duration of each semidiurnal arc. to the left and right of the table is a list of cities in the northern hemisphere with their respective degree of latitude. For example, the Maluku Islands (latitude 0 degrees) are situated upon the equator and, according to the table, have a constant semidiurnal arc lasting six hours throughout the year (i.e. the transit of the sun across the sky from sunrise to sunset is 12 hours). ​‘Londimu Angl.’ (London) is placed upon the 53rd degree of latitude, with the length of the semidiurnal arc ranging from six hours on 21 March (the Vernal equinox) to eight hours 22 minutes on 22 June (the Summer Solstice).

The work is dedicated to Rudolph II of Augsburg, holy Roman emperor from 1576 to 1612, alchemist and patron, a character who was always attentive to scientific innovations of his time. In the dedication to Rudolph II, teodosio Rossi states that he had consulted the studies on the semidiurnal arc by Cristoforo Clavius, who was his astronomy master in Rome.

No institutional examples are recorded by the OCLC.
/