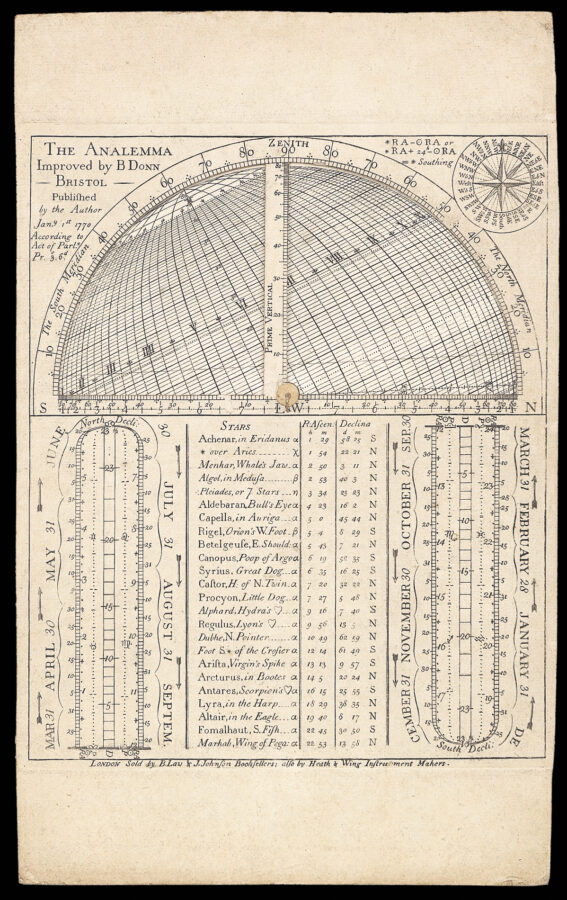 The instrument consists of a rotating celestial planisphere graduated with right ascension and declination. Below is a list of the principal stars, with an analemma charting the sun’s position throughout the year.

The analemma is nowadays considered to be the ​‘figure- of-eight’ device employed in a mean-time sundial to correct for the equation of time. however, in late antiquity the term was applied to a subsidiary instrument, in the form of a graphical projection, which facilitated the construction of a principal work such as a sundial. This was usually a planispheric projection, i.e. an orthographic-stereographic projection of the celestial sphere, as explained by Dr John Twysden (1607–1688) in his work ​‘The use of the great Planisphere, called the Analemma’, published in London in 1685. An advertisement for the analemma appears in a pamphlet published by Donn entitled, ​‘The Description and use of the navigational Scale’ (1772).

Benjamin Donn (1729–1798), sometimes known as Benjamin Donne, was a British cartographer, surveyor and mathematician. Born in Bideford, he was the heir to a long line of well-respected mathematicians, including his father and older brother, who ran a local school. In 1768 he was elected librarian of the Bristol Library, and, ​“in keeping with his taste for the binomial theorem and the book of Euclid, he conceived the idea of converting the establishment into a mathematical academy; but the corporation did not join in his enthusiasm, and students were not invited.” Later he established his own private mathematical academy in Bristol near St Michael’s Church. Cartographically, Donn’s most significant work is his 1765 large format map of Devonshire, based upon a mile-for-mile survey he completed at his own expense. This was the first large-scale map of any British county to win the award of £100 from the Royal Society for the Arts. Donn later went on to publish a number of other less significant but popular maps, including a pocket map of Bristol, a map of western England, and several nautical charts of the Western ocean, as well as various mathematical tables. A lifetime of study and dedication to mathematics earned Donn the title of Master of Mechanics to the king, an honorarium he would hold for only a short time. Donn died in 1798.

Designed to be used at sea, very few of these fragile card instruments survive. It may be that the present instrument is the only surviving example, as we have so far been unable to trace any others in institutional or private holdings.

Benjamin Donn, a West Country teacher and surveyor, was the recipient of the very first Royal Society of Arts award for the best survey of a county, at the scale of one inch to one mile.