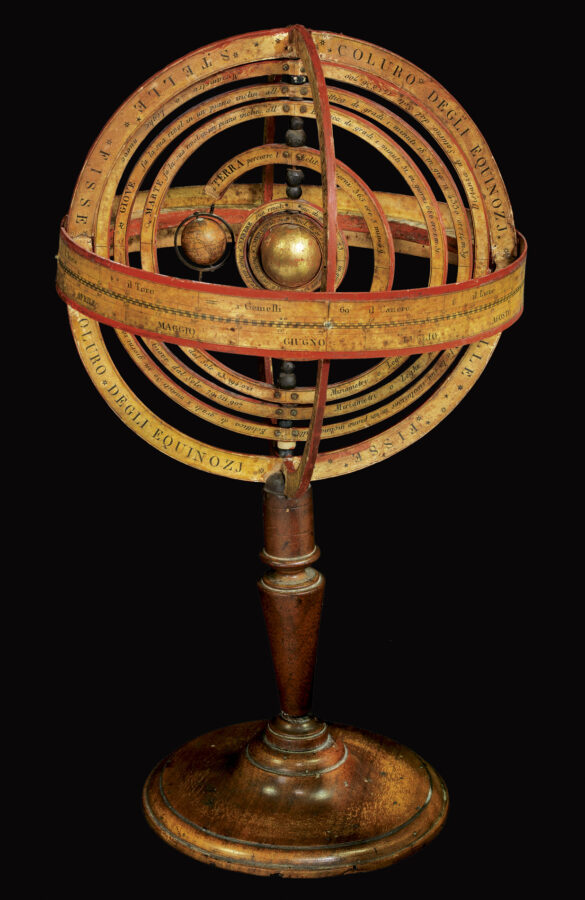 The outermost sphere measures 19 centimetres in diameter and is composed of two wooden circles, which are perpendicularly fixed to each other and represent latitude and longitude. one of them is inscribed with ​‘coluro de solstizj’ and the other with ​‘coluro degli equinozj’. Both are also labeled with inscriptions for fixed stars, and at their intersections are the Poles.

Running horizontally is another circle, marked internally with ​‘circolo dell’eclittica’, and enclosed by a zodiacal strip 2.6 centimetres wide. The strip is graduated and lists the zodiacal signs with their symbols above and the gregorian calendar months below.

Six further rings (or ​“armillae”, in Latin) are mounted inside the outer skeleton, at the heart of which is fixed the gilt sphere representing the Sun. Furthest away from this are the ring of Saturn, then Jupiter, Mars, earth, Venus and Mercury. Earth’s globe measures 2.5 centimetres in diameter and is connected to the main axis via one brass arm that also connects it to the small disc representing the Moon. All rings can be moved around to best describe and understand their orbits. Each planetary ring is filled with information regarding the planet’s inclination, the revolution time in days, hours and minutes, and the distance to the Sun in ​‘Miriamenti o Leghe Nuove’.

A similar French-language example is kept at the national Maritime Museum in Greenwich, London.