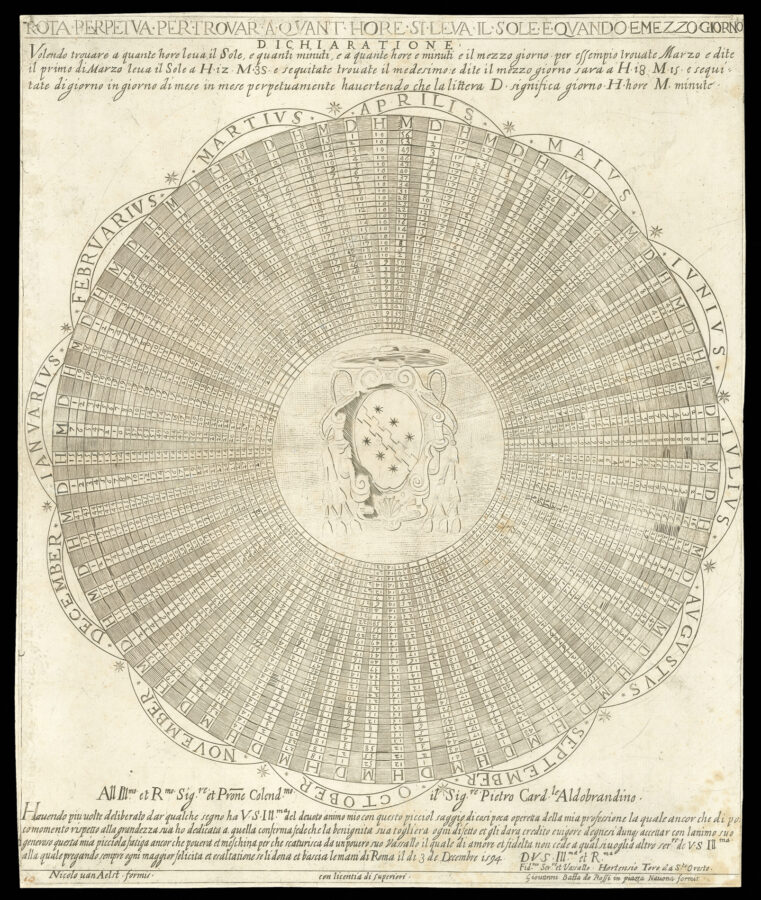 A rare perpetual calendar giving the times of the sun’s rise and midday.

The plate consists of a large wheel in the centre of which is the coat-of-arms of Cardinal Pietro Aldobrandini, to whom the work is dedicated. This, in turn, is surrounded by a calendar, with each month bearing two sets of three columns each. The first set gives the date together with the hour and minute of the sun’s rising, with the second set giving the date and time for midday.

The explanation below the title reads:
​“to find at what time the sun rises, and what hour and minutes is midday, for example find the month of March, say the 1st of March, the sun rises at 12 hours and 35 minutes, and then follow day by day, month by month perpetually, bearing in mind that ​‘D’ stands for day, ​‘h’ hour, and ​‘M’ minute”.

The explanation is at first somewhat confusing, however the times marked upon the instrument should be read as the amount of time lapsed between the sun’s setting and its rising: therefore on 11 March (the Vernal equinox on the chart) the first column reads 12 hours and zero minutes, with the second column 17 hours and 59 minutes, i.e. midday is almost 18 hours after sunset. The date of the Vernal equinox also suggests that the calendar was based upon the Julian model; the new Gregorian calendar, which had been introduced in 1582, had reset the Vernal equinox to 21 March, the date agreed upon at the treaty of nicaea in AD 325.

The work is dedicated to Pietro Aldobrandini, Pope Clement VIII’s nephew, who was elected Cardinal in 1593. unfortunately, little is known about the work’s author, ortensio toro.

There is an institutional copy at the Cooper-Hewitt Collection, New York.
/